Posted by TheOFloinn at 8:56 PM No comments:

The Advancement of Science


MARTIANS BUILD TWO IMMENSE CANALS IN TWO YEARS;
Vast Engineering Works Accomplished in an
Incredibly Short Time by Our Planetary Neighbors
-Wonders of the September Sky.
ACCORDING to a telegram dated Aug. 17, from Flagstaff Observatory,
Arizona, Dr. Percival Lowell announces the rediscovery of two new canals
of Mars, which were seen for the first time at the last opposition in
1909. The canals are now very conspicuous, and attracting world-wide
attention because of their startling significance.

Posted by TheOFloinn at 1:31 AM No comments:


"At a convention of 13 suffragists at Ed. Stermer's store at Mauch Chunk, there was a lively discussion on women's rights.  The fat women concluded that they had the same rights as men, but the lean ladies argued the opposite, and on a vote being taken the fats beat the leans by one vote and the meeting broke up in a wrangle.  Stermer was chairman, but he had to leave via the back yard after trying to bring the two factions together."

Not only did we on the East Coast have to deal with the devastation of the 8/23 Earthquake, a portion of whose damage is shown below

but now we must brace for HURRICANE IRENE!  A Category 1 hurricane.  Granted, it is making landfall coincident with high tide, but still it seems a bit hyperbolic.  No one has mentioned Global Warming™ yet, and it is the only hurricane to make landfall in the past three years.  Perhaps they are waiting for people to forget when they were announcing during the Year of Many Hurricanes that the Global Warming™ computer models predicted more and stronger hurricanes; then shut up real fast when it became fewer and weaker.  Don't worry, though.  Models were made to be adjusted and, as my cosmologist friend is wont to say, "With seven variables I can model any set of data - as long as I get to choose the coefficients."  Thank goodness they changed it to Climate Change just in time.  That way it doesn't matter which way the wind blows.  The theory will swivel to point in that direction.

Blaming weather on climate change is a bit like blaming motion on location change.

Meanwhile, our intrepid TV meteorologists, having lacked for hurricane disaster stories for three years, are making the most of things, leaning into the wind and spray (against a backdrop of folks picnicking on the seawall), and speaking bravely and portentiously of dire things to come.  The Delaware, I have just learned is already 4 feet above normal, not far from flood stage of 22 feet.

Okay, maybe a little far from flood stage.  My prediction: a usual amount of flooding as per the increased runoff since all the New Yorkers came out and paved over the Poconos.  But nothing like 1955, when the Portland-Columbia bridge (at 725 feet the longest covered bridge in the country) broke loose in the flooding after Connie+Diane and struck the Gibraltar of the Delaware - the Easton-Phillipsburg Bridge - like a battering ram, taking out the center span.  The water crested at just under 44 feet, five or six feet higher than the Pumpkin Freshet of 1903.(*)  And raced through a building with the boastful, if piquant ad: World's Fastest Car Wash.

So, I laugh at Irene.  Ha-ha!  It is to laught.  You don't have a patch on Connie and Diane, the twin sisters of August 1955.  I laugh in part because I live high above on the Lehigh Heights, aka German Hill, perched on 300 feet of limestone and granite.

(*) The Pumpkin Freshet of 1903.  So called because somewhere upstream the waters scoured a pumpkin farm and the river flowed choked with pumpkins all the way to Philadelphia.  It was in the survival of this flood that the Easton-P'burg bridge was dubbed "The Gibraltar of the Delaware."

On the Connectedness of Nature

That any two things in the universe are connected can be demonstrated inductively by the magic of Google.  It is not necessary that to be computationally tractable a process must be informationally encapsulated.  Take any two words.  The Stanford Encyclopedia of Philosophy uses "banana" and "mandolin" in an article on the Frame Problem.  If you google it, you obtain 2,690,000 hits.

So I tried "melancholy" + "eels" and obtained 3,090,000 hits, including unlikely poetry precisely imagining melancholy eels, at a site yclept poetry-of-despair.

Then I tried "elephant" + "petunia" only to discover that there is a plant called an elephant petunia along with 3,570,000 other hits.

Then I opened the dictionary at random and got "theosophy" + "hemorrhage."  This yielded a mere 71,300 hits, including those with "theosophist" (at least one of whom appears to have died of a hemorrhage) and "theosophical."

Then "canthus" (the corners where the upper and lower eyelids meet) + "deliverance."  After quote-enclosing "canthus" to avoid the homonymous "can thus," I obtained 4,240 freaking hits and learned that surgical management of carcinomas at the inner canthus involves rotation and deliverance of the flap under the glabellar skin.

Your task, my devoted henchmen, is to explore this phenomenon yourselves.
Posted by TheOFloinn at 9:22 PM 4 comments:

Quote of the Week

Sydney Eddison recounts [a story] of the violinist Itzhak Perlman, who as a boy was struck with polio and who as a man must walk with the aid of leg braces and crutches:

At a concert on the night of November 18, 1995, at Avery Fisher Hall in New York City, one of the strings of his violin suddenly snapped during the performance. Stunned, the audience held their collective breath, expecting Perlman to stop and leave the stage. Instead, he paused, then continued playing — adjusting, creating, compensating as he went along, and when he put down his bow at the end of the concert, a mighty roar of applause filled the hall. When it had died down, he spoke to the audience: “You know, sometimes it is the artist’s task to find out how much music you can still make with what you have left.”

The quote was found in this article that touches on consciousness.
Posted by TheOFloinn at 2:45 PM No comments:

Labels: brains, quote of the day, science marches on 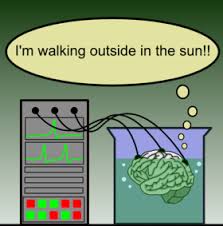 At RENOvation, the World Science Fiction Convention held in Reno NV this past week, there was a panel with the title "What is Consciousness?"  The panel did yeoman's work without (as is customary at con panels) ever coming to a conclusion, let alone a consensus conclusion.  I was in the audience and did not participate, but a few points struck me afterwards.

There were several initial attempts to define consciousness, though no one tried to define consciousness by negation in the obvious sense; viz., "whatever it is you have when you are not unconscious."  They seemed to get all mixed up with "sentience," "intelligence," "empathy," and so forth.  All these terms were used interchangeably by panelists.

One of the participants proudly declared himself a materialist, but never specified of what material "consciousness" is made.  My theory is that it is made of the same 'material' as momentum, gravity, or reproductive fitness; viz., none.  Physics has been edging away from materialism for the past hundred years.  Quantum mechanics dealt it a deadly blow, leading Heisenberg to remark that "It has become clear that the desired objective reality of the elementary particle is too crude an oversimplification of what really happens."  IOW, materialism no longer accounts even for matter.  The preferred term is "physicalist."

NPR conducted a listener's poll to find out the 100 favorite SF and Fantasy books of people who listen to NPR.  Some of the popular titles are puzzling and at least one seems to sit ill upon the mind of the stereotypical NPR listener.  In any case, the list is here:  Top 100 Science-Fiction, Fantasy Books

Note that trilogies, quadrilogies, and no-end-in-sight-ologies are counted as one entry.  (This is an ontological weakness: what if you adored one volume and loathed another in the series?)  I note also a strange tendency in fantasy titles toward doublewords togetherpressed.  I also note that Piers Anthony's Xanth series rubs shoulder with The Time Traveler's Wife and 1984.  Also, a mainstream book that can be called "science fiction/fantasy" seems to make the grade.

Your challenge:  What should not be here?  What is missing?  Inquiring minds want to know?

NOTE: For some reason, every time I tried to line up the images with the list, Blogger insisted on moving things around in unexpected ways.  At one point the text itself somehow arranged itself into multiple columns.  So don't worry if a cover is not near its place in the list.

When Money Was Money

"This certifies that there has been placed on deposit in the treasury of the United States of America five silver dollars payable to the bearer on demand."

How quaint things were in those days.

Read more »
Posted by TheOFloinn at 4:51 PM No comments:

(We can hear the atrocitizers now: "Oh, no!  Not a standing interagency board!  What shall we do?")

Quote #1
“Logic” and rationalist thought (a certain degree of national Darwinism) should be the fundament of our societies. I support the propagation of collective rational thought but not necessarily on a personal level. Because, if a woman was purely rational, she would choose to not have babies at all, and instead live her life in a purely egotistical manner. We should strive to become a civilisation where the individual’s acquisition of wealth would no longer be the driving force in our lives.

Quote #2
As for the Church and science, it is essential that science takes an undisputed precedence over biblical teachings.

Read more »
Posted by TheOFloinn at 6:55 PM No comments: 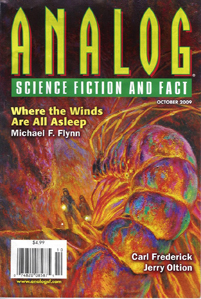 Hat tip to Pawyilee at the Analog Forum for making note of this for fans of my novella, "Where the Winds Are All Asleep."

Posted by TheOFloinn at 11:45 AM No comments: