Climbing the Ladder of Inference


A commonplace in management training is The Ladder of Inference.  The ladder was described by Chris Argyris, and later included in The Fifth Discipline: The Art and Practice of the Learning Organization, by Peter Senge. The ladder is used when teaching problem-solving, management decision-making, and similar skill sets.  The awareness of the ladder and the errors it leads to serve to warn against "jumping to conclusions."

A better phrase, in keeping with the metaphor, might be "climbing too fast."

Cleaning Out the Tabs Day

Good Thing it Was a Controlled Experiment
"In a controlled experiment carried out by Alcoa Aluminium, 20 kilos (44 pounds) of molten aluminium was allowed to react with 20 litres of water, along with a small quantity of rust. 'The explosion destroyed the entire laboratory and left a crater 30 metres (100 feet) in diameter,' [scientist Christian] Simensen said."
--Agence France-Presse, Sept. 21
(h/t WSJ Best of the Web)
+ + +

Updated.
Once Upon a Time in the West
There was this little thing called the Scientific Revolution.  This tends to loom large in a number of areas, like Science Fiction and tendentious web sites where Science!™ is worshiped as a god, used as a club, but seldom discussed as such.

Fear Not
Your government is protecting you from these scofflaws

who did not affix orange safety triangles to their buggies.  The Swartzentruber Amish in Kentucky evidently consider the bright orange devices hochmutig, or "showy," and prefer to use more humble reflective tape.  They look like hobbits.  Note the height of the desperado in the lower left.  Personally, I think they are being hochmutig about not being hochmutig, but then my ancestors were regular church, Gott sei dank.
+ + +

The Gift That Keeps on Giving 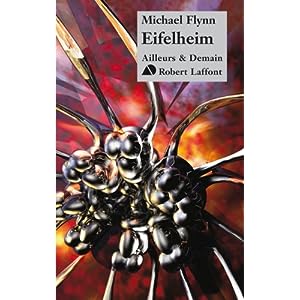 The French will be issuing a paperback edition of EIFELHEIM.  Perhaps winning the Prix Julie Verlanger was persuasive.
Posted by TheOFloinn at 9:23 PM No comments:

Now obviously Defense doesn't need spats, since they are long out of fashion; but cutting spats doesn't mean they have to cut the panel debate over the clouds deficit, too.

Posted by TheOFloinn at 6:30 PM No comments:

The Product of Conception

A reader with the Davidic name of Jesse has asked a series of questions on the other site about our previous post. I'm bringing it up as a new post because his questions raise interesting points; and it's easier to handle than in the comm box.


A "concept" itself seems not completely sharply defined, for example does it require verbal ability or could a highly autistic person who never developed the ability to understand language be said to have "concepts"?

Adam and Eve and Ted and Alice

John Farrel has written a column at his Forbes site entitled "Can Theology Evolve," quoting from an epistle of Jerry Coyne:


"I’ve always maintained that this piece of the Old Testament, which is easily falsified by modern genetics (modern humans descended from a group of no fewer than 10,000 individuals), shows more than anything else the incompatibility between science and faith. For if you reject the Adam and Eve tale as literal truth, you reject two central tenets of Christianity: the Fall of Man and human specialness."

Now, by "literal truth" Coyne undoubtedly intended "literal fact," since a thing may be true without being fact, and a fact has no truth value in itself.  I do not know Dr. Coyne's bona fides for drawing doctrinal conclusions or for interpreting scriptures, although he seems to lean toward the fundamentalist persuasion.  Nor am I sure how Dr. Coyne's assertion necessarily entails a falsification of human specialness (whatever he means by that).  I never heard of such a doctrine in my Storied Youth(^1) though it is pretty obvious from a scientific-empirical point of view.  You are not reading this on an Internet produced by kangaroos or petunias.
It is not even clear what his claim means regarding the Fall.  Neither the Eastern Orthodox nor the Roman Catholic churches ever insisted on a naive-literal reading of their scriptures, and yet both asserted as dogma the Fall of Man.(^2)

Now modern genetics does not falsify the Adam and Eve tale for the excellent reason that it does not address the same matter as the Adam and Eve tale.  One is about the origin of species; the other is about the origin of sin.  One may as well say that a painting of a meal falsifies haute cuisine.
Still, there are some interesting points about the myth of Adam and Eve and the Fall.  Not least is the common late-modern usage of "myth" to mean "something false" rather than "an organizing story by which a culture explains itself to itself."  Consider, for example, the "myth of progress" that was so important during the Modern Ages.  Or the equally famous "myth of Galileo" which was a sort of Genesis myth for the Modern Ages.  With the fading of the Modern Ages, these myths have lost their power and have been exploded by post-modernism or by historians of science.  Before we consider the Fall, let us consider the Summer.  No.  Wait.  I mean the Summary.
___________________________
(^1) storied youth.  Literally.  My brother and I wrote stories when we were kids.
(^2) Makes you wonder what their actual reasoning was, if it was not some backwoods 19th century American reading an archaic English translation of some Greek texts.