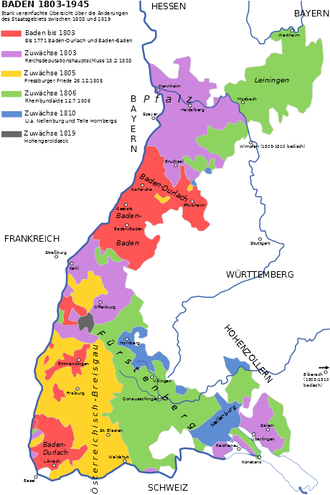 The name Ockenfuss has been spelled in a wonderful diversity of ways, from Akofouse to Okenfuse and beyond. The name seems to come from Ochsenfuss, Ox-Foot, perhaps from Baden near the Swiss border because one Hans Ockenfuss was an associate of Zwingli in the Zurich Reformation in the 1520s. This was the same region whence TOF's maternal ancestors came: the Singleys, Schwars, et al. It was once a Grand Duchy, but is now part of the German federal state of Baden-Wurttemburg.

Later that year, Andrew Jackson won re-election to the presidency of the U, beating Henry Clay 219-49. The spoils system was in full career and the vetoing of the National Bank, a major controversy.

In America, the family seems to have gone to Haycock Run, Bucks Co., PA because a year and a half later the records of St. John the Baptist Catholic Church contains an entry for:

Her later death certificate will name her mother as Marien Schmitt (=Mary Smith).

1840. After this, they moved north to Forks Twp., Northampton Co., PA, where the family is listed in the Census as John Oakefuse (40-49), with the following family:
The 1840s saw a major recession triggered by the Panic of 1837 and persisting until 1844. Wages and prices declined and unemployment ran as high as 25%. William Henry Harrison won the presidency, then died after the shortest term on record. Congress then annexed Texas, which led to war with Mexico.
1850. Still in  Forks Twp., the 1850 Census lists:
That year, in a Whig tradition, president Zachary Taylor died in office and Millard Filmore succeeded him. Henry Clay oversaw the passage of five bills, collectively called the Compromise of 1850. This trimmed Texas to its present borders, admitted California as a free state, established popular sovereignty in the two territories organized from the Mexican Cession (viz., Utah and New Mexico) and sundry other matters. Slavery had become a major political issue

1852. On 17 Dec, the German Reformed Congregation of Easton PA recorded the death of an Ackenfusz, aged 27. This is probably Joseph, who does not appear elsewhere after this.

Elizabeth is married to Butler and Catherine is probably also married. Joseph is either dead or moved away and Anthony, who would be 33, has not been located yet. The baby is probably the younger Mary's, perhaps an indiscretion.

At the end of the year, Lincoln was elected and the South seceeded from the Union. The Civil War will begin in the next year.

1865. After the Civil War, John started work on the Lehigh Valley Rail Road, per his later obituary. Asa Packer had been elected president of the railway a few years before, and the main line from Easton to Allentown was open, replacing the canal; so John started working on the railroad about the time there was a railroad to work on. The main line was later extended to Buffalo in the west to Jersey City (to NYC) in the east.

1869. On 18 Feb., Mary Ockenfuss was married to John Hetzler of Ackermanville, according to the Easton Daily Argus.

1870. The Census for South Easton lists
Since the elder Mary is too old, the children are probably those of Mary the younger. But she had married Hetzler the year before, so why is she still called "Okenfuss"?

1871. On 12 Nov, Matilda Ockenfuss was born to Maria (Mary) Ockenfuss. She was baptized on 2 Dec at St. Joseph Church, South Easton. No father was listed.

and on Canal St. below the cliffs lived
So finally here is the Hetzler name! Albeit, Mary is already a widow. Anthony should be 20 and Catherine 15, based on the 1870 Census, so what is happening.

1880. Mr. John Ockenfuss, an old and respected citizen of South Easton, died at his residence on St. Joseph street about seven o'clock last evening [4 Oct], aged eighty-five years, three months and two days. The deceased came to this country in 1833 and settled in Easton. He was in the employ of the Lehigh Valley railroad compsny fifteen years. Last March a year ago he was taken sick, but was not obliged to take to his bed until three weeks ago. A wife and two daughters survive him. The funeral will take place next Thursday morning at nine o'clock. Services will be at Saint Joseph's church. -- Easton Daily Argus This suggests a birth date of 2 July 1795.

1883. City Directory for this year places Mary Ockenfuss on Canal St. near the depot. and Anthony Ochenfuss, laborer, on Apricot Alley. (This was a street parallel to Canal, that ran across the side of the cliff about halfway up the hill. It no longer exists.


1889. Joseph S. Drake and Mary A. Ochenfuss were lawfully married on the 25th day of December 1889 according to the Rite of the Roman Catholic Church and in conformity with the laws of the State of New Jersey. -- Marriage register of Sts. Philip and James Church, Phillipsburg NJ.

1891. Matilda Ockenfuss was married to Daniel J. Flynn on 11 May at St. Peters Church in Newark, Essex Co, NJ. They had been working in one of the shoe factories there, but shortly after this, they moved to Phillipsburg, Warren Co., NJ.

1900. Mary A. Drake, nee Ochenfuss, was living at 390 Washington St., Phillipsburg NJ in the household of Frank Cassidy and her daughter Catherine Ochenfuss Cassidy.