Nice to see some recognition of the performing arts.  Alas, there was no such award when I trod the boards as Mayor Shinn in The Music Man back in the year mumblemumble.  In a peculiarity, the role of Mayor Shinn was also played by my uncle in a community player production.  In that, my brother Dennis played Winthrop.  For my high school play, my brother Kevin inherited the role.  It's all in the family.
Posted by TheOFloinn at 10:02 PM 1 comment:

Clearly, he has been talking to his Uncle D.
Posted by TheOFloinn at 8:24 PM 1 comment:

Read more »
Posted by TheOFloinn at 7:55 PM No comments:

This is the title of an article in the current issue of First Things by Robert R. Chase on the treatment of religion in science fiction that mentions yr. obt. svt.  It is a thrill to be mentioned with the likes of Cordwainer Smith and R.A. Lafferty, with Gene Wolfe and Philip K. Dick, with Connie Willis and...  I blush.
www.firstthings.com/article/2010/03/science-friction
Posted by TheOFloinn at 11:49 PM 2 comments:

Read more »
Posted by TheOFloinn at 6:47 PM No comments:

Read more »
Posted by TheOFloinn at 8:35 PM No comments:

Posted by TheOFloinn at 6:21 PM No comments:


Posted by TheOFloinn at 9:28 PM No comments: Posted by TheOFloinn at 1:13 AM No comments: 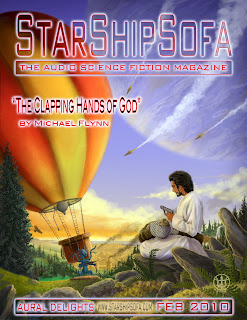 Posted by TheOFloinn at 10:14 PM No comments:


h/t Mark Shea
Posted by TheOFloinn at 1:47 PM No comments:

Read more »
Posted by TheOFloinn at 1:16 PM No comments:

Posted by TheOFloinn at 1:03 PM No comments: