My brother Sean sent me this, for which I thank him. 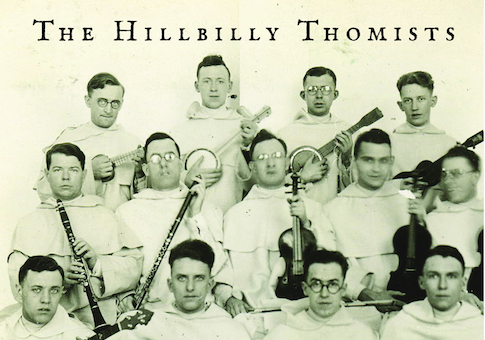 Objection 1. It seems that a handful of Dominican friars (two handfuls on the album<https://www.amazon.com/Hillbilly-Thomists/dp/B077Y9JNF3>) should not be a bestselling bluegrass band. Bluegrass is Protestant stuff, soulful songs for whitewashed independent Baptist churches and big homey kitchens and not Latin nerds in white habits in Northeast D.C.

Objection 2. Further, bluegrass is as Americana as anything, and until John F. Kennedy bedded the White House and Bill Buckley built the conservative coalition, Catholics were not exactly accepted or accepting of the American thing. Americanism is a heresy after all.

Objection 3. Further, as Fr. Thomas Joseph White admitted in opening their concert near the White House this past week, bluegrass is as often about murder and unrequited love as it is about God. That a bunch of religious should sell thousands of copies of such music may strike as odd, considering their vows of poverty, chastity, and obedience.

On the contrary, inspiring these good Catholic boys, Flannery O'Connor said of herself, "Everybody who has read Wise Blood thinks I’m a hillbilly nihilist, whereas . . . I'm a hillbilly Thomist," and band-member Br. Justin Bolger said in his original song "I'm a Dog"—after the traditional domini canis "hound of the Lord" pun on Dominican—"I’m a dog with a torch in my mouth for my Lord / Making noise while I got time."

I answer that, in an eponymous album and great live show under the watching eyes of the Catholic Information Center's wall-covering icons, "The Hillbilly Thomists" have marked their territory in the bluegrass world. To combine jargon hip both with the kids these days and with Dominicans—this music is fire.

Reply to Objection 1. They came to bluegrass and Thomism the usual ways, which is to say, through their culture—Catholics south of Dixie who love and play music. Fr. White learned mandolin in Kentucky while living in Cincinnati 16 years ago before moving to D.C., and with time, enough like-minded and like-voiced friars congregated here to make Hillbilly Thomists a going concern.

Reply to Objection 2. While bluegrass became what it is, adopting and combining English ballads and hymns and gospel and blues, Catholic sacred music was set in a traditional Latin liturgical context with Gregorian chant and all the other related resplendent smells and bells. But that hardly means when they take up the banjo that Thomas Aquinas's spiritual brothers are engaged in the—post-Vatican II—fairly common appropriation seen in singing a Luther hymn at Mass. For another influence on Americana is distinctly Catholic: Irish folk music.

Reply to Objection 3. The fathers and brothers of the Dominican House of Studies take a break from their scholarship to record an album of sacred music every year, to be sold to support the house's work and facilities, and the funds raised by this kitchen-table casual departure from convention will go to, apropos, a new kitchen. But homey as the music is, it is sacred nonetheless. Here's to hoping for more from the Hillbilly Thomists.

The post No Question, These Dogs Can Bark appeared first on Washington Free Beacon.

That old deaf guy sure knew how to write 'em

Posted by TheOFloinn at 6:40 PM No comments:

They just don't write them like this any more

I first heard the 1812 in Freshman history class at Notre Dame HS, when Miss Wagner played it for intro to the Napoleonic Wars.
Posted by TheOFloinn at 6:28 PM No comments: One of the lessons hammered home in the Smithsonian Channel's show Air Disasters -- do not look for it on your next in-flight movie selections -- is that as a general rule no air crash has a single cause. Rather, it is generally a nexus of causes that happen together that result in the crash. The same is usually the case in quality assurance, especially for those problems we call "common cause" variation; that is, those variations that are due to the system rather than to breakdowns in the system.

For example, if you throw two dice and the result is a 13, there is usually a particular ("assignable") cause for the outcome. There is an extra dot on one of the 6s; the dots have been miscounted; a third die has been introduced. IOW, some extraneous cause not normally part of the system has upset matters. OTOH, if the outcome is a 12, there is no particular cause. That is, the outcome is the result of a host of "small" causes, no one of which would the elimination thereof eliminate the 12s. And this is true no matter how undesirable the 12 may be.

Only by altering the system -- in this case, by changing the design of the dice -- can the undesirable outcome be eliminated. We could load the dice, reducing the likelihood of the 12. We could white-out one dot on one of the 6s. We could switch to tetrahedral dice. And so on. But no operational changes will solve the problem.

Why folks expect that socio-economic problems are mono-causal TOF does not know. It cannot be because they are simpler. Even those who repeat nostrums about "changing the system" seldom think through what that actually entails, and they will simply repeat the same "causes" that theory demands.

A favorite cause of the "male/female wage gap" is "gender discrimination." But there is no indication of what sort of discrimination this might be or how it is implemented in this day and age. Of course, there is likely some of this going down, despite decades of affirmative action to the contrary. Never underestimate the ability of even the most liberal managers to speak from both sides of the mouth. But a study of college majors undertaken by the Georgetown University Center on Education and the Workforce some while back might be instructive.

According to the Center, the ten most remunerative majors and the proportion who majored in them were:


Of these, only Pharmacy majors included a significant proportions of women.

The ten least remunerative majors were:

Of these, only Theology was predominately men, although a couple of others approached parity.

Thus, one major factor affecting the wage gap is that women choose not to major in disciplines like Petroleum Engineering or Mining Engineering that command high salaries and gravitate toward lower paying careers in Early Childhood Education and Community Organizing.

These examples should also do to indicate there is no relationship between the remuneration in a profession and its social importance. A job is paid at a rate that reflects the ability to replace the person in it, and this is a function of the specialized skills and knowledge required.
Posted by TheOFloinn at 6:26 PM 28 comments: