Now, TOF has never dueled with longswords, nor indeed with any fell instrument, so for versimilitude, he consulted that Font of All Wisdom; viz., the Internet, to obtain nuggets of neepery with which to strew his narrative.  There is a veritable cornucopia of such info Out There, which TOF judges reliable since it does not involve God or Darwin.  Fighting with longswords is quite intricate, with a number of guards and thrusts, a three-fold division of the combat, and sundry other technologia.  Who knew.  Those Western oafs, unlike the refined Japanese samurai, were supposed to merely flail and hack at one another with big clumsy blades of sharp steel.  But it seems there was some art to it after all.

Though they did not pirouette.  All the great fightmasters were agreed on that.  Exposing your back to your enemy while you spun around was a great foolishness, since the enemy was, you know, trying to kill you?

For one thing, the longsword was a complicated gizmo.  The strong and the weak are parts of the blade, but are translations from MHGerman starke and schwech, and refer to the leverage you get from them.  The strong is the part where you try to catch or parry the enemy's blade, and the weak is the part that moves fast and possesses the pointy thing.  The fuller is not to let the blood run off but to lighten the blade without weakening it. 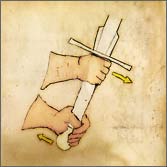 The pommel was more than decorative.  TOF had always imagined that the longsword was gripped in both hand like a peasant wielding an axe or Duke Snider a baseball bat, and indeed there are thrusts and guards where this is done.  But in many of the postures, the two hands work independently.  Primarily, the strong arm (usually the right, as shown) grips the sword below the cross guard, sometimes placing the thumb against the crossguard for better control.  The off hand grips down by the pommel and apply the laws of leverage by pulling or pushing on the pommel while the strong hand acts as a fulcrum or moves in the opposite direction.

A most awkward-looking guard is the one called the Ox.  The name comes from a fanciful resemblance to the horn of an ox.  The hilt is held high on the side of the head and the point is aimed that the enemy's face.  (This guard disuades him from rushing forward and blocks downward attacks.)

But look at the wrists.  They are crossed.  The strong hand is gripping at the crossguard, but the off hand is crossed under it and is gripping at or near the pommel.  This means that if you thrust from this position, you give an additional push on the pommel with your other hand.  This gives the thrust greater strength.

The problem with neepery is one can get sucked deeply into it, leading to the dread Infodump in one's writing.  So much of what TOF is presently reading will vanish into the narrative, revealing like a fan dancer just enough to show there is substance underneath.  So I must take care in the narration not to describe every guard and every thrust.