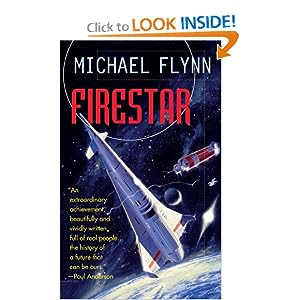 The first book of the Firestar series is back in print.  There is no change from the first edition, which means it is now mostly alternate history.  Back then, 1999, 2000, 2001 etc. were all in the future!  One of the problems with near-future SF, I fear.  I suppose we could have bumped everything up a couple of years; but really, why pretend that this is an effort to predict the future, rather than the stories of a potpourri of characters?  The science and technology of SSTO is still there; but it's interesting to see what this future omitted or overlooked.

Anyhow, for people who missed it the first time around -- and judging by sales, many of you did -- now have a chance to make up for that lack.  Buy early and often!

It is my understanding that Tor intends to bring back the entire series: Firestar, Rogue Star, Lodestar, and Falling Stars.  I wonder if there will be a boxed set? Woo-hoo.
Posted by TheOFloinn at 8:02 PM 2 comments:

was celebrated in the usual fashion by the 105th meeting between Easton Area (PA) High School and Phillipsburg (NJ) High School.  In anticipation thereof the Easton Red Rovers burned down Phillipsburg.

When's the last time you were smitten with a writer's word-smithing? Which authors have the power to transport you? Patricia McPhillip? Emma Bull? Steven Brust? Lois McMaster Bujold? Well, if you haven't already discovered Michael Flynn, get ready to add him to that list. Flynn is amazing. I haven't gotten this drunk on sheer words since I read Bone Dance. And the story is dam' good - no lack of action here.

Donovan, the scarred man, was on his way home - sort of - at least, he has a daughter he rather wants to see again, and maybe, just maybe his daughter's mother won't kill him on sight. Unhappily, he got abstracted by Ravn Olafsdottr, a Shadow agent, under orders to bring Donovan to a planet - not his destination - to assist in a little matter of rebellion and war.

Donovan, like Odysseus before him, is a man of many tricks. He is also, thanks to the Confederacy, a man literally of many minds. So he is remarkably resourceful - but how can you trust a man with a personality like a dodecahedron?

Ravn manages to survive Donovan's displeasure - one assassin can recognize another's repertoire - and has come to tell the women Donovan loves why Donovan himself never arrived. She spins out a tale of exceptional violence, triple-treacheries, and the strange loyalties that turn war's outcome. Embedded in her narrative is a challenge, one which Bridget ban, a Hound with the authority to summon and command other Hounds, must decide how to answer. But quietly listening all the while, and drawing her own conclusions, is Mearana, Donovan's daughter, and she has a mind very much her own.

In the Lion's Mouth is a sequel to The January Dancer and Up Jim River, and it is of course best to read them in order. However, it is possible to start a series midway and made very good going; so, do as you will.

This is space opera at its best: it ranges across galaxies; it involves empires, political intrigue, thwarted romance, and heroic deeds. In addition, Flynn, whose name suggests Irish ancestry, uses his bardic talent to emulate Homer in some passages, to ravish your soul in others, and to play most exquisitely the polyglot game.     Characters frequently use languages as a kind of warfare or to test each other (when they aren't testing each other in more lethal ways). John M. Ford would have delighted in this. In fact, if you wish Ford had written sequels to Growing Up Weightless, you might consider this series the great-great, ever so great descendant, the distant future of that cryptic storyline. With more Gaelic. Flynn has the good grace to be prolific, with eleven-plus books published through Tor, so there is much, much more to enjoy of his imagination and craft. - Chris Paige

The second is from RT Book Reviews:

RT Rating
Space opera is not usually rife with mythological references or Celtic-flavored fantasy elements, but this third installment in a trilogy that began with The January Dancer uses both to interesting effect. Flynn’s unusual approach adds a layer of interest to a rather standard plot of civil war and betrayal, but readers who like their science fiction straight up might grow impatient with his use of multiple dialects, poetic devices and ballads, and a narrative technique that relies on numerous points of view throughout.

In the long struggle between the Confederation of Central Worlds and the United League of the Periphery, the Hounds and the Shadows are the secret agent arms of each power. Long enemies, when Ravn Olafsdottr, a Shadow, arrives at the stronghold of Bridget ban, a Hound, with the story of Donovan buigh, Bridget’s missing former lover, a truce is called. As Ravn relates the story of her capture of Donovan, Bridget learns of Donovan’s unwilling involvement in a civil war between rebels and loyalists in the Lion’s Mouth, the Shadow’s organization bureau. (TOR, Jan., 304 pp., $25.99)
Reviewed By: Donna M. Carter

(I suppose it's a good review when the only complaint regards the "use of multiple dialects, poetic devices and ballads, and a narrative technique that relies on numerous points of view."  I have actually gotten kvetches in the past that my books have "too much characterization" and that all he (the reader) wanted was "content."  This is much easier to do with a single POV, no differences in voice, and none of that poetry stuff.  I think it's called an "outline" or "cliffnotes.")

In the Lion’s Mouth received a starred review in today’s issue of Publishers Weekly!

Prometheus Award–winner Flynn follows Up Jim River and The January Dancer with another powerful tale of far-future humanity. Donovan buigh, an amnesiac with multiple personalities, is en route to his lover and their daughter when assassin Ravn Olafsdottr kidnaps him. Ravn plans to make Donovan a rallying symbol in a secret rebellion undertaken by the assassins called Shadows against the Confederation oligarchy. Donovan reluctantly agrees, at first watching from the sidelines and then overturning all expectations in a glorious culminating firefight. The story, which Ravn relates with dramatic oratory, is a marvelously heroic ancient legend reborn in humanity’s future days. Space opera fans will be swept away by the poetic rhythm and subtle plot construction, and the open-ended conclusion will leave them clamoring for future Donovan buigh adventures. Agent: Spectrum Literary Agency. (Jan.)
Posted by TheOFloinn at 12:23 PM No comments:

Is This an Answer?

Recently, I had occasion to read two items in close mental proximity.  One was by a blogger who calls himself in a touching fit of Objectivist modesty Blazing Truth, which I stumbled across in the usual fashion while googling for something regarding Aristotle's potency/act distinction that I thought I might use in a PowerPoint presentation.  The other was an essay by the inimitable James Chastek continuing a discussion on the nature of the sensibles.

If it's not one thing, it's another.  First, the one thing.

The Only Thing Necessary to Say

“The only thing necessary for the triumph of evil is for good men to do nothing.”


"It was on Sept. 26 when the big drive started in the Argonne Forest and I saw all kinds of things that I never witnessed before.  We started out on the night of the 25th.  At 9 o'clock we commenced a tank road and worked our way almost to the German's front line trenches.  At 2:30 one of the greatest of all barrages was opened.  It was said that between 3500 and 4000 guns, some of them of very large calibre, went off at that hour just like clock work.  We worked on this road under shell fire until about 3:45 and then went back until the infantry went over the top at 5 oclock.  We followed with the tanks.  That is the way the Americans started and kept pounding and pushing ahead until the great day on Nov. 11.  ...

It was some life.  I am proud that I went through it, for nobody on the Hill will have anything on me...  I was a little with sneezing or tear gas.  It made me sick but I remained with the company for I did not like to leave my detachment at any time for if something would happen, I thought, there would be plenty of help.  I felt much better in a few days.  A small piece of shrapnel splinter hit me below the knee.  Otherwise I was lucky. ..."

"Somebody will wake up soon when the boys get back to the States..."

Posted by TheOFloinn at 11:37 AM No comments:

The Importance of Geography

The Feast of All Saints

This is a reprint of a post from two years ago in Live Journal.

Everyone thinks this is the Irish Feis Samhain, which began at sunset on 31 Oct and that the Church co-opted the date.  However, the  feast "in honor of all the saints in heaven" was originally 13 May, and Pope Gregory III (d. 741) moved it to 1 Nov to mark the dedication day of All Saints Chapel in St. Peter’s at Rome.  There was no connection to distant Irish customs, and the parishioners of St. Peter would not likely have been beguiled by it.  Not until the 840s, did Pope Gregory IV declare All Saints to be a universal feast, not restricted to St. Peter's.  The holy day spread to Ireland.

The day a feast is the "vigil mass" and so after sunset on 31 Oct became "All Hallows Even" or "Hallowe’en."  It had no more significance than the "Vigil of St. Lawrence" or the "Vigil of John the Baptist" or any of the other vigils on the calendar.

In 998, St. Odilo, the abbot of the powerful monastery of Cluny in Southern France, added a celebration on Nov. 2. This was a day of prayer for "the souls of all the faithful departed." This feast, called All Souls Day, spread from France to the rest of Europe.

That took care of Heaven and Purgatory.  The Irish, being the Irish, thought it unfair to leave the souls in Hell out.  So on Hallowe'en they would bang pots and pans to let the souls in Hell know they were not forgotten.  However, the Feast of All Damned never caught on, for fairly obvious theological reasons.  The Irish, however, had another day for partying.