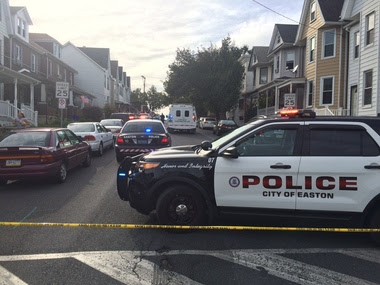 TOF and the Lightning

TOF meant to comment a couple weeks ago, but God was stalking him.

On the way home from the surgeon -- last follow-up, hooray! -- driving along the south face of South Mountain (or whatever they call it out in the wilds by Allentown) lightning struck the hillside.

Just as we passed by, too. Missed us by maybe a couple hundred yards. It struck about halfway up the mountainside, the only time TOF ever had a close-up view of a lightning bolt, and about as close as he ever wants to have such a view.

It was a broad, white streak straight from sky to ground, no zig-zag, and the thunder was not the rolling thunder of a distant bolt but a sharp snap with clean edges, like sheet metal. There was of course no lag between the sight and the sound and, man, it was loud. It set no fire that TOF could see, but we tarried not.

The physical therapist commented when TOF saw her later that week that she had once treated a man who had survived a lightning bolt -- twice. This was a man from whom TOF would ask for a lottery number or a stock tip. Or not: there are different kinds of luck.

Just got word today that my 25 kiloword story "Nexus" has been accepted at ANALOG and will appear in the April issue. April of which year is unspecified. Woo, as they say, hoo.
It is a bit of an unusual yarn. Not, said Trevor, your typical ANALOG story. Naturally, I am thinking of ways I could have done better.
This was the story that was prefigured here and in a few other spots. These drafts may have been altered since the posts.
Posted by TheOFloinn at 7:56 PM 5 comments: