on the Preview Page

Sing a Song of Singleys

The Singleys, of whom my mother was a one, came originally from Oberhausen (now part of Rheinhausen) in the Breisgau of Baden. The Breisgau  is the land between the Rhine and the Black Forest, and was formerly part of Farther Austria, i.e., Hapsburg lands far to the west of Austria. When the Holy Roman Empire was dissolved at the end the Napoleonic kerfufffle, the Breisgau was ceded to Baden..

The name Singley has been spelled with a wonderful diversity, both here and in Baden. Among the variants have been Zengley, Zengli, Zängle, Zangl, Zaengle, Zenglin, Sengla, et al.. Die Zange means "pliers," "forceps," or "tongs." The "-li" ending is the southern German take on the standard German diminutive "-lein" e.g. Hans >Hansl. 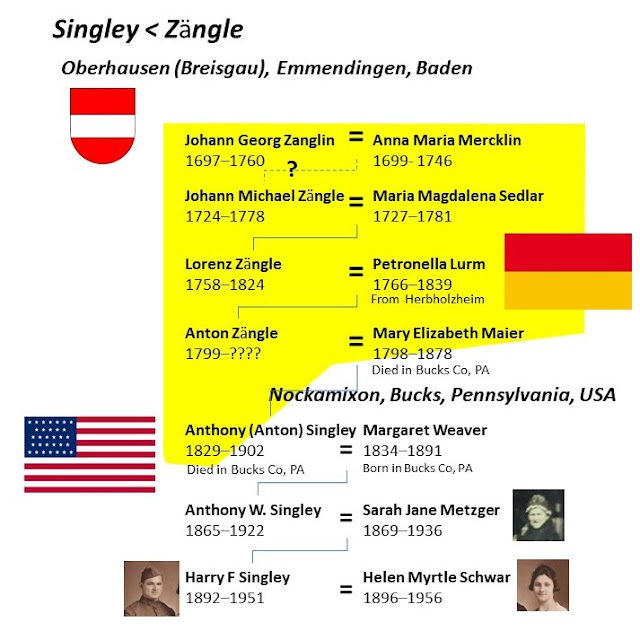 The first Singley of whom we have definite knowledge was

Email ThisBlogThis!Share to TwitterShare to FacebookShare to Pinterest
Labels: flynncestry

In the Belly of the Whale.

on the Preview Page (see list in left column)