A Bit of Nostalgia

The Feast of St. John Neumann

The fourth bishop of Philadelphia was the founder of many parishes in the 1850s; among them, St. Joseph's Church in Easton PA.

This was a German church, announced in Der Unabhaengige Demokrat:

The site is now occupied by the third church.  The first was outgrown; the second burned down. This is a view of the Westwerk, which is, paradoxically, on the east end of the building.
The interior as I knew it in the 1950s had been arranged by Fr. John P.N. Fries, a noted liturgist and the last native-born German pastor. 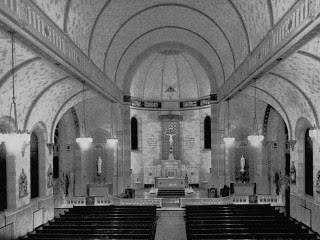 It is a Romanesque-Gothic hybrid.  Note inter alia the apse and semi-dome at the west end, the barrel vault, corbels, chancel arch, and applied columns.  More subtle, and hard to see in this photo are the lines.  There is a vertical line running from the eye in the dome (representing the Father) through the dove on the canopy (representing the Spirit) to the Son on the cross.  Below that is a bas-relief of the Last Supper, then the tabernacle, then the altar.  A horizontal line runs through the aforesaid bas-relief across icons of the sacraments.  The two lines form a cross.  There are two mosaics flanking the altar on the altar screen: Mary and Eve.  Both feature a tree and the offering of a fruit, though with different consequences.

The stained glass windows were made in Munich and are believed (based on the style and colors) to be from the Franz Mayer studios.  They were installed in 1920, after a delay caused by WW1.  Below, a rose window and triptych of the Pentecost.  The matching rose on the opposite side of the trascept is of the Nativity.  Matching nativities, so to speak.  The side windows depict the life of St. Joseph on one side and liturgical aspects of St. Joseph on the other.  The windows in the sanctuary features various sacrifices, while those in the choir lost depict St. Gregory (as in chant) and King David (as in psalms). 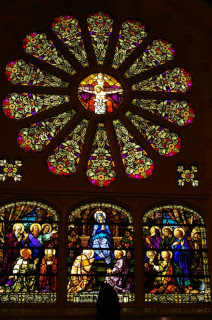 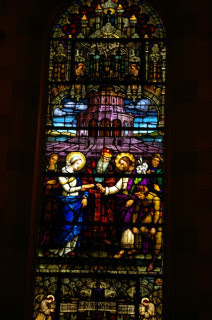 Just about every feature was arranged by Fr. Fries with some liturgical meaning or symbolism.  They don't build 'em like that any more, not with that fine attention to detail.

Some of that detail was lost in post-Vatican II simplifications.  The tabernacle was moved out of line, for one thing.  More recently, the Eye bit the dust.  (Apparently, children today found it much scarier than children half a century ago.  Oh, well.) 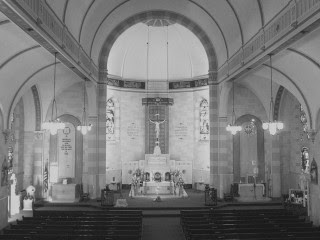 Fr. Fries did not want to baptize me, as my name was "Flynn."  My mother, who was 100% German, told him she would take me home and baptize me herself in the kitchen sink.  She would have, too.  There is no irresistabl force on earth than can overcome the immovable object known as a German Mother.  Lieber Zeit!  The pastor caved.

Fr. Fries was the last native-German pastor.  Since then, there have been Dutch and even Irish pastors, all American-born.  A couple years ago the parish was combined with St. Bernard's, which sits atop Gallows Hill across the Lehigh River.  Ironically, it was to secede from this formerly Irish parish that the Germans started their own.  (To be fair, the trip from German Hill to Gallows Hill in the 1850s involved climbing down one steep hill (there were helpful stairways on the cliffside), going down to the bridge, then climbing up another steep hill.)

The pastor of the new parish was neither German nor Irish (nor even Polish-Lithuanian, the third parish blended into the new.)