Shaking Mistel Branches at Statues is not Science

One Tim O'Neill raises an interesting point on his blog Armariam Magnum in response to a communication received regarding his post ""Agora" and Hypatia - Hollywood Strikes Again":  Mr. O'Neill is himself an atheist, but is devoted to empirical evidence and sound reasoning.  I've edited out his direct responses to the communicator.

It's bizarre the way whenever these people who scream so hysterically about how Christianity murdered ancient learning and philosophy are challenged to produce some evidence they are always forced to fall back on some vague reference to the Christian suppression of pagan cults. As though this irrelevant side issue somehow supports their case.

What the hell the trashing of some gloomy Mithraeums and the closing down of weird superstitious cults where men in silly hats waved incense at painted statues had to do with the preservation of science and reason.

The early Christians who defended the use of pagan wisdom (and who won the debate on that topic, thus enshrining the rational analysis of the world in the Western tradition for centuries to come) were perfectly capable of differentiating the wisdom of philosophers who happened to be pagans from the silly superstitions of gelded priests shaking rattles at garish statues of Cybele. 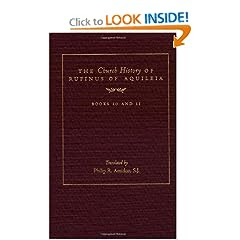 Because our view of the ancients is filtered through the lens of what our ancestors chose to preserve, we think of the Greeks as paragons of Reason and Science.  The account of the destruction of the Serapeum in Rufinus' Ecclesiastical History Book 11:22-24 et seq. mentions some of the things discovered inside the temples: the decapitated heads of babies, for example.  There were also a giant phallus, disemboweled women, seduction, magic tricks with astronomy and magnets, etc.  (See  books.google.com/books and search for the string "In Alexandria meanwhile fresh disturbances").  Because we have preferentially preserved the rationalistic works of the great philosophers, we tend to think of the Greeks in general as great rationalists and extend this notion to their religions.  But the utter irrationalism can take us by surprise. (See book below, left).

When we read in Socrates Scholasticus that Hypatia "succeeded to the school of Plato and Plotinus," we have to suppose that she was deeply versed in Neoplatonism, the dominant philosophy of late antiquity.  This means that she would have held to a single transcendent God (not a multitude of immanent gods) and that this single God had three "hypotstases": The One, the Intellect, and the Soul.  (The which bears more than passing resemblance to the Father, the Word, and the Spirit.)  This was far removed from gelded priests shaking rattles at statues.  It would be far easier for a Christian to hold such things than for a pagan.

Side note, there is no reference to Hypatia as a pagan in the primary sources!  Given that Augistine of Hippo and Hypatia's student, Bishop Synesius of Cyrene, were both well-versed in Neoplatonism -- and that, as Peter Brown (right) points out, Neoplatonism was the dominant philosophy of the upper class, both Christian and non-Christian -- there is no reason to suppose that anyone "succeeding to the school of Plato and Plotinus" would necessarily have been a non-Christian.  Certainly, her custom of going about in the company of men was more in line with Christian than with pagan Greek practice; and apparently her known pupils were Christian.  See frb's comments here: johncwright.livejournal.com/315329.html
Tim O'Neill's point leads to some interesting counterfactual speculation.  Suppose Neoplatonism had triumphed as thoroughly in Romania Aeterna as Confucianism did in China; and Christianity had been co-opted as thoroughly as Buddhism.  We can easily imagine the old pagan cults being suppressed by the Neoplatonists on the basis that they were irrational superstitions.  And with far more "pagan" thoroughness.
Posted by TheOFloinn at 8:12 PM