The Autumn of the Modern Ages

The Modern Ages began conventionally ca. 1500 and ran until fairly recently. Just as the 15th century was the "Autumn of the Middle Ages" (as Johan Huizinga's book was titled) so too has the 20th century been the Autumn of the Modern Ages.  All those things that marked the Modern Age began to fade or change: Cities, the Bourgeois, Science, Privacy, Science, Industry, and so on.  It is not that the new age (whatever it is to be called) will be better or worse.  The Classical Ages faded into a barbarian Dark Age; the Middle Ages faded into a Renaissance.  Which was the worse disaster is anyone's guess.

We always imagine the future as being something like the present, only more so.  In the 50s, the future was going to be the 50s -- with flying cars.  In the 70s, it was going to be sex, drugs, and rock-n-roll forever.  But an age is not defined by its gadgets.  Even if we one day get our flying cars, they will not make that age like the gung-ho, white-bread, techno-worshiping 50s.  Sorry, Jetsons.  An age is defined by the type of person who lives in it.

Art, as usual, runs ahead of the curve.  What we call "modern art" is decidedly "post-modern," since the essence of the Modern Ages was representational.

Quiz: Below the cut are pictures of couples and pictures of artwork from each of the Modern Ages.  Between which set do your find a break in the Modern tradition?

On the LiveJournal, I added some YouTube sections for music for each of the sections.  Play each one for a few minutes and see when you note the musical break.

I warn you.  The shift is very subtle. 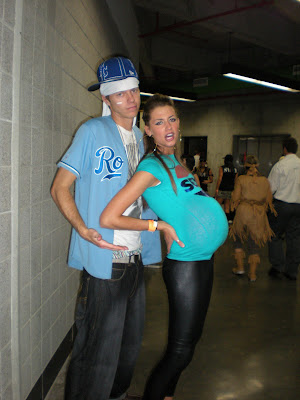 ﻿
Okay, I'm being sarcastic.  It ain't that subtle.  Also, the painting and the music runs a bit ahead of the couples, since artists are often more attuned to this sort of sea change than others.
Posted by TheOFloinn at 6:46 PM