There was a recent spate of news stories about a Canadian couple who had decided not to tell anyone whether their new kid was a boy or a girl.  They did this so as to utterly confuse the poor kid based on their crypto-religious belief that "gender" roles are determined by Society™ and not by the science of genetics and biology.  Now, this has been done before with the usual and expected results regarding the Fooling of Mother Nature.  It almost always means the poor kid is a boy.  We shall see.

Meanwhile, we have this from the late 19th century when girls were girls and boys were....

This is a photograph of the young Franklin Delano Roosevelt, so it says here.  My dad voted for the guy once, so I asked him and he told me it was quite common back then to dress up all children as girls.  Who knew?  Maybe that is what accounts for World War One.

There is linguistic support.  The English word "girl" originally mean a small child of either sex.(*)  The word "boy" came from the Latin boia which referred to the leather collar worn by Roman slaves.  The medievals, lacking slaves, used the term to refer to any servant and in particular by the master of any of his apprentices.  Since nearly all apprentices were young males, the term "boy" shifted from "servant" to "male child."  The female equivalent was "wench."  Had serving wenches been more common than apprentice boys, we might talk today of girls and wenches rather than of boys and girls.

The German word Gör is defined in my dictionary as kleines Kind, small kid.  The diminutive -lein is shortened to -l or -le in South German.  Hence, Hansl and Gretl for Little Hans and Little Greta.  Add the diminutive to Gör and you have Görl, which I once saw on the front page of a Viennese newspaper.

(*) Sex is biological; gender is grammatical.  This is clear to near anyone but Anglophones.  The German word for "manliness" (die Männlichkeit) is grammatically feminine. 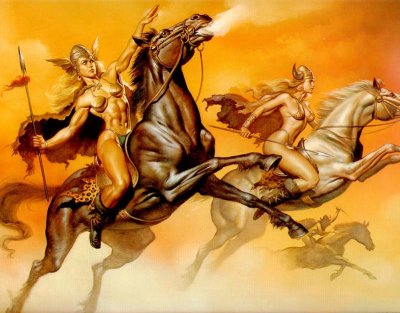 Much better personification of German manliness
Posted by TheOFloinn at 4:04 PM