So said Pope.  No, not that Pope.  The one who wrote poetry. 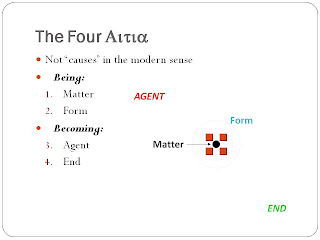 In another venue, TOF chanced to encounter the following encomium to evolution:


The brain evolved in the same way the fins evolved: because their evolution conferred survival advantages in given situations.

Now the curious thing was that this statement was made by an individual (whom we will call "Adam Apple") who also asseverated that there was no τελος in nature.  I will wait a moment for my reader to stop banging his forehead against his desktop.  You could damage your computer screen that way.


There.  Didn't that feel good when you stopped?

Yes, sports fans.  The same person who stated that there were no ends in nature also claimed that evolution was for conferring survival advantages.  But for-ness or toward-ness is precisely what it means to have finality.  When this was pointed out, he simply repeated his act of faith that there was no finality in nature.  He literally could not grasp that he had been proposing "survival advantage" as the final cause of evolution.

There are several possible reasons for this:
Let us examine these reasons.
1. Brain Meme.  Taking the least charitable first, we may note that while there might be finality in nature, there is certainly no meme in nature.  Memes are one of the more outré inventions of the science popularizer and professional atheist, R. Dawkins.  They seem to be derived from notions of angels and demons; but there is no hard, empirical evidence for the existence of these immaterial beings that supposedly control our lives.

We can express this in normal terms by saying that Adam has an idée fixe.  He learned that this was so from revered books and teachers and cannot shake it off.  (Yes, I know.  But we already had words like "idea."  Why did we need "meme" save to provide a fake aura of scientificality.

2. Disproven by Science™.  That finality has been "disproven" is likely the root of his conviction that there is no finality.   After all, "they" have said it, he believes it, and that settles it.  But whether there be final causes or no is not a physical question, it is a meta-physical question; and you can no more disprove a metaphysical principle with physics than you can disprove the Euclidean postulates with Euclidean geometry.  And for much the same reason: metaphysical stances set the boundary conditions for physics.  They are what you must assume before you can even do the physics.


Now when we examine what the Scientific Revolutionaries actually said, we find more nuance.  Francis Bacon (left) acknowledged that final causes existed in nature.  He just didn't think they were useful.  Etienne Gilson noted that to understand that a bird's wing was for flying helped you to understand and appreciate the beauty of nature; but to understand the efficient causes of how the wing enabled birds to fly would help you build airplanes.  Since the essential nature of the scientific revolution was to move Natural Science from Art Criticism to a subset of Engineering, Bacon and Descartes said the hell with final causes.  Gilson adds sadly that if Descartes had only written "in addition to" rather than "instead of," we could have saved most of the incoherence that has afflicted modern philosophy.

The rejection of finality was a methodological choice.  It was discarded, not disproven.   But once you have said that finality is not part of Science™, they become invisible to the methods.  It would be like demanding that only metal detectors are valid instruments of science, and then denying the existence of wood.


3. What is Finality?  Objections #1 and #2 stem from #3, a misunderstanding of finality.  We observe everywhere that nature works to an end.  Many finality deniers take this to mean "self-conscious purpose" and laugh that a river has no "intention" of reaching the sea.  But all it means is that natural processes tend to arrive "always or for the most part" at the same end point.  An acorn always grows into an oak, and not into a chimpanzee.  A river flows toward the point of minimum gravitational potential.  A bird gathers twigs in order to build a nest.  And so on.  The very nature of a scientific law of nature is to describe how A entails B "always or for the most part."  Efficient causes may push matter around; but unless they push it some particular direction, there is no scientific law.

1. Terminus. In traveling from "here" to "there," the "there" is the end of the trip, where the traveler comes to rest.  When such stability terminates a natural process, whether inorganic or organic, it is the end of the process and as such its final cause.

2. Perfection.   When a thing has attained all that is necessary to its nature it has reached an end of another sort.  It is more perfect (per-fectus, "thoroughly made") and possesses no de-fectus, i.e., is lacking in nothing it should possess to be what it is.

3. Cognitive.  Many animal and human activities are planned or intended in advance and so can be seen as end-directed from the beginning.  A person building a house or a bird building a nest must have in advance some notion of what is intended, either intellectively or instinctively. Otherwise neither builder would know how to gather the materials.  Much of the difficulty with teleology in nature arises from seeing all final causality as intentional or cognitive, and not differentiating the cognitive from the terminative and the perfective.


Final causes make efficient causes coherent, and evinces an order in the world.  Einstein put it this was in a letter to M. Solovine:

“You find it surprising that I think of the comprehensibility of the world... as a miracle or an eternal mystery. But surely, a priori, one should expect the world to be chaotic, not to be grasped by thought in any way. One might (indeed one should) expect that the world evidenced itself as lawful only so far as we grasp it in an orderly fashion. This would be a sort of order like the alphabetical order of words. On the other hand, the kind of order created, for example, by Newton’s gravitational theory is of a very different character. Even if the axioms of the theory are posited by man, the success of such a procedure supposes in the objective world a high degree of order, which we are in no way entitled to expect a priori. Therein lies the miracle which becomes more and more evident as our knowledge develops.”

although he likely did not realize that he was affirming finality when he wrote this.  Cardinal Schoenborn of Vienna put it this way:

It is true that modern scientists have typically rejected these notions, but they haven’t eliminated them, only ignored them. More precisely, they have presupposed and relied upon them while simultaneously claiming their nonexistence.

4. Finality is a "Gateway" Belief.  This may be the key obstacle.  There is a modern belief that establishing finality as a fact of nature is very difficult, but once you have done so, God easily pops out the other end.  Because they reject this conclusion, they reject finality.  However, Aristotle, who thought finality in nature as rather obvious, never reasoned from finality to God.  Thomas Aquinas, who did so reason, thought that finality was obvious, but establishing the chain of reasoning from there to God was very difficult.  IOW, one may accept finality without risking one's a priori beliefs.


Brains and Fins.
Now what about brains and fins conferring "survival advantage"?  It would be obnoxious to notice that a great many kinds of beings have survived without either brains or fins, so let us consider what it means to confer an advantage.  Would a fin confer an "advantage" on a squirrel?*  On a giraffe?  It does not seem likely.  Whether a feature is an "advantage" or not depends on what the organism is trying to do; that is, on its niche.   If a bird is trying to crack nuts, one sort of beak is advantageous.  If it is trying to loosen bark to get at the insects beneath, then another sort of beak is advantageous.  If a bird changes behavior -- perhaps because it finds itself blown by the winds to a new environment -- then the direction in which natural selection nudges it will change.  Thus, we see that the organism's behavior is part of what sets the end for natural selection, and thus (at least in part) constitutes the final cause of natural selection.


(*) We leave aside the advantage of brains.  Many people equate brains with minds, and so become confused when we insist on approaching the brain materialistically as just another organ, one that processes sensory inputs, collates them, and activates motor neurons and the like.  Arguably, every animal on Earth has a brain of some sort.
Posted by TheOFloinn at 9:05 PM