As Screwy as an Electron


Let us begin with a quotation from the quantum physicist Richard P. Feynman:

"Electrons, when they were first discovered, behaved exactly like particles or bullets, very simply. Further research showed, from electron diffraction experiments for example, that they behaved like waves. As time went on there was a growing confusion about how these things really behaved ---- waves or particles, particles or waves? Everything looked like both.

The difficulty really is psychological and exists in the perpetual torment that results from your saying to yourself, "But how can it be like that?" which is a reflection of uncontrolled but utterly vain desire to see it in terms of something familiar. ... Do not keep saying to yourself, if you can possible avoid it, "But how can it be like that?" because you will get 'down the drain', into a blind alley from which nobody has escaped. Nobody knows how it can be like that."


IOW, says Dr. Feynman, it's a mystery. But the mysterious nature of photons and electrons does not deter us from our beliefs. And that leads us to today's topic, here at an end of a Year.

For those who follow such things, there may be some recollection that 15 June 2014 was Trinity Sunday on the Christian Calendar and today, 22 June 2014, is Corpus Christi. These two feasts, which cap the Pentecost season, mark two of the most profound mysteries. No, not photons and electrons, but the Trinity and Transubstantiation.

Now while a mystery may be at bottom, well, mysterious -- what exactly is gravity? -- it may be useful to ask whether it is reasonable to believe in the mystery. There are excellent reasons, such as the Millikan experiments, to believe in electrons, even if their essential nature eludes our reason. But does this apply to such things as the Trinity?

Cardinal Schönborn of Vienna, in his catechesis on Genesis a few years ago, made the comment that the Church does not demand a blind faith, since that would not be a human faith, but rather looks for reasoned faith.

"A blind faith, one that would simply demand a leap into the utter void of uncertainty, would be no human faith. If belief in the Creator were totally without insight, without any understanding of what such entails, then it would likewise be inhuman. Quite rightly, the Church has always rejected "fideism" -- that very sort of blind faith.
Belief without insight, without any possibility of perceiving the Creator, of being able to grasp by means of reason anything of what he has wrought, would be no Christian belief. The biblical Judeo-Christian faith was always convinced that we not only should and may believe in the Creator: There is also much about him that we are capable of understanding through the exercise of human reason."
-- Lecture 1

St. Thomas, in Contra gentiles and in the Summa theologica, holds that reason and philosophy are the preamble to faith, that they can demonstrate that certain beliefs are reasonable, even if full acceptance requires faith.

It is worth noting that Plotinus developed a theology of a triune God in the pagan Neoplatonic tradition, described here, here, and here. He undoubtedly was influenced by the Christians he despised, and his reasoning was different from the Greek Fathers or from Augustine and Aquinas. Yet, he arrived at the same point. Meanwhile, at Mahabalipuram, Tamil Nadu State, there is a temple to a triune God (the Trimurti) whose aspects are Brahma the Creator, Vishnu the Preserver, and Siva the Transformer. So Gods who are three-but-one are not as uncommon as one may think.

Now, the analogy is not exact. In fact, it is downright Sabellian. The three personalities are defined in relation to other beings. That is, they are external. This is not the case with God, who isn't supposed "a" being, even "a" supreme being, but rather Being Itself. Three personalities in one person can be a useful analogy to three persons in one being.

The Eastern Church has historically taken a "bottom up" approach, starting with the Persons as given, and trying to determine how they can be one in being. The Western Church has taken a "top down" approach, starting with the unity of God, and trying to discern how it can be three distinct Persons. The Eastern Church often teetered on the brink of Arianism, in which Christ and the Spirit were divine creatures, while the Western Church risked Sabellianism, in which the persons were reduced to mere modalities or offices, as in the analogy of TOF. It was because of resistance to Arianism in the East and to Sabellianism in the West that the filioque controvery arose.

So let's ask how Thomas approaches the Trinity.

Suppose we have reached the point in our reasoning at which God is known as pure act, being itself, all power-full, eternal, etc., etc. We gotta start someplace. TOF has not the time to produce a digest version of Contra gentiles, Summa theologica, Compendium theologiae, or Contra errores graecorum.

1. As First Cause, God is the source of all powers in the world. This includes the powers of reason possessed by humans; viz., intellect and will.(*)

2. Since one cannot give what one does not have, there must be something in God that is at least like intellect and will in humans.


2.1 God is pure act without any potentiality, while matter is being in potency. So God must be utterly free from matter. But material forms are rendered intelligible by being abstracted from matter and from material conditions; so freedom from matter is the cause of intellectuality. Therefore, God must have intellect.

2.2 God understands Himself, who is perfect good. But to understand a good is to desire/love that good, and desire/love operates through the will. Therefore, God must have volition.

3. The process of the intellect is knowing. It is entirely internal to the intelligent agent. When we understand something, we generate in our mind a conception of the understood object. A conception is expressed in words. 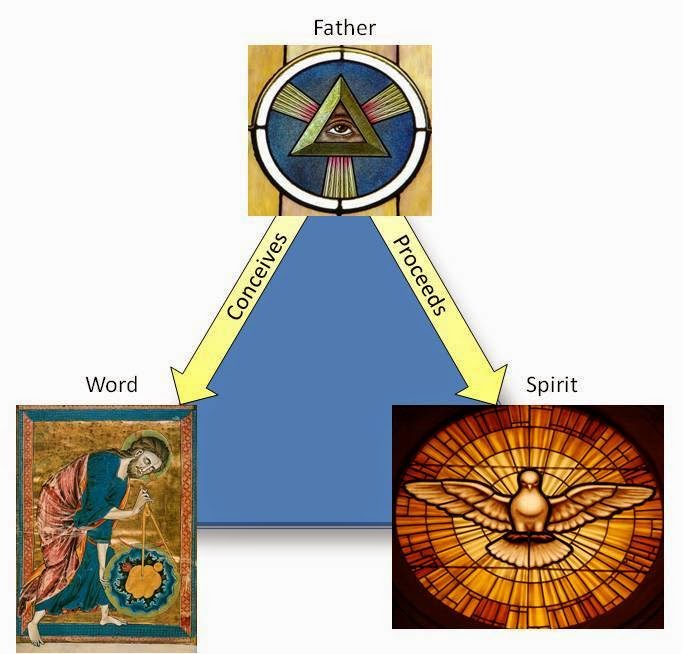 
4.1 The Word is the likeness of God himself, a concept emanating from God’s own self-understanding.  The Word is therefore sorta kinda like God's "self-conception." But because God is purely actual, this self-image must itself be actual.  IOW the Son does not proceed from the Father as a separate being but as an intelligible conception of God himself.


4.2 The Word is thus conceived (or begotten) of the Father, since we say "begotten" only when like generate like. (We do not say that a human being has "begotten" his hair. Summa theologica I.27.2) Because there is only one intellect, the Word is the "only-begotten." We are justified in calling the Word "the only-begotten Son."


5. Since God is all-good and the Son is his generated likeness, God, who desires the good, loves himself from all eternity. The subject (or principle) of this loving is still called the Father. Its object (or term) is called the Spirit. (Summa theologica I.27.3)


5.1 The intellect proposes something to the will as a good and the will is drawn by its nature to this good. Love proceeds forth toward that which is desired and returns possessing the good in an eminent sense. By analogy, the immanent procession of the Holy Spirit corresponds to the procession of love towards the Word in the intellect of God.

5.2 The procession of love in God is not called "generation." The intellect is made actual by a likeness of the understood object residing in the intellect.  But the will is made actual by having a certain inclination to the thing willed.  So what proceeds in God by way of love, does not proceed as "begotten," but proceeds rather as spirit, which expresses a certain vital movement (e.g., one is moved by love to perform an action.)  The term "generation" is not appropriate but the Latin spiration does not have a familiar English ring to it. Hence, we simply say only that the Spirit "proceeds" from the Father.  (Summa theologica I.27.4)


6.1 From this it follows that the Father and the Son are consubstantial.  If God’s act of understanding is His very being; the Son generated by that understanding will have the same nature as the Father, even though the Son is a separate hypostasis.

6.2 From this it follows that in some sense the Spirit proceeds from the Father and the Son.

7. God’s will cannot be anything other than his intellect. A good that is apprehended by the intellect is the object of the will. This good moves the will and is the will’s act and perfection. But in God there is no distinction between mover and moved, act and potency, perfection and perfectible. Therefore the will of God is not distinct from the divine intellect.

8. There is no third procession. Divine processions derive only from actions which remain within the agent, that is, within God. In a rational nature, such as God, there are only two acts: the acts of intellect and will. The acts of sensation, which also appears to be an operation within the agent, are not intellective and require bodily senses. It follows that no other procession is possible in God but the procession of the Word, and of Love. (Summa theologica I.27.5)

Do not keep saying to yourself, if you can possible avoid it, "But how can it be like that?" because you will get 'down the drain', into a blind alley from which nobody has escaped. Nobody knows how it can be like that."

It was in that useless attempt to imagine "how it could be like that" that led the Eastern Arians "down the drain" on one side and the Western Sabellians "down the drain" on the other side. (Ever notice how heresies come in twos?) In effect, one heresy claimed that God was a "particle" and the other claimed He was a "wave." But in the "theological space" between Arianism and Sabellianism there is plenty of room for doctrinal nuances. Heresies often take something true and carry it too far. Strength stands in the middle. The Eastern Church built from the Persons up to to the One God and opened itself (by over-emphasis on the distinctness of the Persons) to the temptation of Arianism and even tritheism. The Western Church built from the One God down to the Persons and was vulnerable (by overemphasis on the oneness of God) to Sabellianism, in which the Persons became simply roles or modalities of God. If only they could combine forces.

It was in noodling out the Trinity (and the nature of the Incarnation, a separate topic) that Western Civilization (including Byzantium) hammered out the notion of persons that formed the basis of our laws and culture.

TOF is out of time. He had hoped to comment on Transubstantiation, today (now yesterday) being Corpus Christi, but he got all involved in the Trinity. Maybe later, hey?