TOF is trying an experiment. Can he load a video from his machine to the intertubes? We shall see. [The answer turned out to be no.] 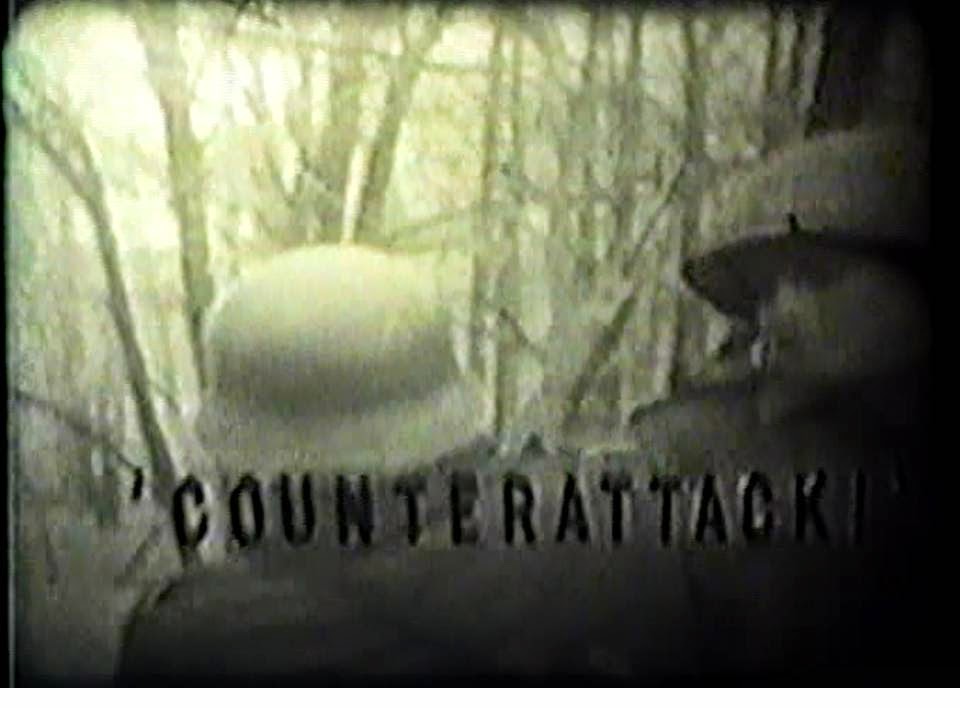 The great classic movie COUNTERATTACK was made in 1964/65 by a groups of juniors and seniors at Notre Dame High School, Green Pond, PA, and was presented on the occasion of an evaluation by Middle States Association of Colleges and Secondary Schools at the request of the principal, Fr. Strassner. Much of what has changed in the last 50 years can be deduced from viewing this film.

Earlier scenes (and a different "plot") had been shot in 8mm color film during the Fall. These scenes involved infiltrating German lines to blow up a bridge that the enemy might use to escape the encircling Allied armies. A pond and clever photography angles stood in for the river. The bridge was supposed to be just under the water to foil aerial recon, so we only had to build the approaches on the near side. However, lighting proved a problem and a coherent film could not be built from the good scenes.

We learned the Fall footage was toast around December and told Fr. Strassner, "Sorry - maybe early 1965." He says, "Boys you're playing in the adult world now. You will produce a film." So we shook  him down for:
Equipment, helmets, etc. consisted of parental souvenirs from WW2 plus various working rifles here and there. We purchased black powder and blank cartridges from a local gun shop. Most of the filming was done on the farm of our producer, Jim Reilly. (It was a Christmas Tree farm, of all things.) Hence, there was dynamite available for the special effects.

We made the film in the late winter, which was not severe. In several scenes, for continuity, we had to use Ivory soap flakes to replace the snow that had in the meantime melted. We had a range safety officer whenever live ammo was being fired, and everyone double and triple checked to make sure they were using blanks. (Only one person held the live rounds.) In the 8mm color films you can see the muzzle smoke from the blanks, but not in the 16mm b/w.

I suppose there was some luck involved in that no one was hurt, but it wasn't dumb luck.

Round about April Fools Day, Gary and Jim R. pulled an all-nighter to cut the film. Robert Jennings did the title screen. He and Gary used an acid etched glass screen for rear projection which Gary learned about from reading 4SJ's Famous Monsters of Filmland. It seemed to take forever. Jim R. spliced and edited. Editing was easy, he said, since both Gary and he had the same vision for the film, having shot most of it.

Once the film was made, we looped a sound track. This is not easy to do with silent film. Sound was recorded on a separate reel-to-reel tape recorder, which in the premier showing was kept in synch with the film by judicious pausing of the tape deck. We whistled, coughed, and spit into the mike to record the sound effects! I did most of that. Going "pooh!" into the mike sounded remarkably like an explosion when played back. The Great Escape provided the theme music. I suppose we could have had trouble over that. We even had a script, in English and German, although during the premier Mrs. Marschall, one of the parents in the gym/auditorium, could be heard clucking, "Ach, nein!" so one supposes the translation was not the greatest.

The tape reel is now lost or, more precisely, has not been found. So the film is now silent by default. In the event the film ever gets uploaded, TOF's Faithful Reader is advised to go "pooh!" at the proper moments while watching.
We presented Counterattack at a required student assembly during the Middle States visit scheduled for April 6 - 8. At the end, there was stunned silence from the rest of the student body, then an eruption of cheers and applause.

The present film has a few infelicities in the early part due to the transcribing. What TOF has now is a DVD copy of a VHS tape shot off a movie screen projection of the original 16mm film. So there is a moment of snow, some out-of-focus segments, and some sprocket jerking; but things settle out.

The film involves a US squad led by a lieutenant that digs in on a hillside during a general retreat in the face of a German counterattack. They find a machine gun nest at the bottom of the hill with two gunners who are wondering where the hell everybody went. The LT tells them they have to bottle up this pass so the Germans can't break through. It's probably a suicide mission. Everyone is properly enthusiastic.

The Germans attack. The LT says, good thing they don't have a mortar. Then the mortar starts laying in rounds, so the LT sends two men -- Jim Reilly and Jim Welsh -- to sneak through at night and take out the mortar. They do this, though Reilly is killed. Then there is more attacking and more defending. There seem to be more Germans than there actually were in the cast because we played multiple roles. TOF was killed twice! One of his roles was the German lieutenant, and he can be seen initially directing the mortar to lay in the fire.

The last scene shows the lieutenant's helmet as a grave marker and American soldiers walking past (George, Jim, Jim, Red, Dan, and the rest having gained them the time for a counter-attack) a voice says, I wonder who that guy was. Freeze frame. End.

In the walking-past scenes, there were only a few guys but they circled the camera and walked past again and again.

We had not learned that things always look faster on film and therefore one ought to move more slowly when being filmed. Hence, the sometime herky-jerky looking motions.

At about 6:24 into the movie, Red Scannell learns the truth of the old adage about not spitting into the wind.

If you are going to blow up a laboriously-built pill box, you only get one chance to film the scene.

German Wehrmacht greatcoats can be made by taking ordinary greatcoats and dying them in a boiling cauldron with dark green dye, then sewing on Wehrmacht rank badges and such.

Audiotape has "stretch" but film is ratcheted. Therefore the one will get out of synch with the other.


At 12:48 in the film, Red learns that if you are in a fox hole and a grenade lands nearby, standing up is not an optimum strategy. The explosion sends him into a perfect forward somersault down the hill.

(Red was the de facto stuntman. In the original 8mm color film, he dove into the pond fully uniformed in order to swim the satchel charge out to the (faux) bridge.)

Kids in 1964/65 could do things that kids of 2014/15 cannot dream of. Today, a kid can get in deep trouble for biting his lunch sandwich into the form of a handgun.


The Cast: Where be they now?

TOF is collecting info where he can, and will update this as he is able. If TOF's Faithful Reader knows any of these folks, or knows Kevin Bacon (whose connectivity is legendary), pass the word that their vitae are wanted.


No students were harmed in the making of this movie.

TOF's efforts to upload the movie have run into a size limit.

Viz., The video is five times larger than the limit.
TOF must learn to make the video into five smaller pieces

Posted by TheOFloinn at 6:01 PM