Where did they go? You must remember them! A few years ago, they were everywhere. Celebrities spoke of them in the hushed and rapturous tones usually reserved for pyramid power or acupuncture. There was hardly a thought-manager who neglected to tell us of the wonders they would bring. We can "resist the onslaught of time’s vulture." They would provide "answers that have so long been beyond our grasp." They constituted "one of the most promising areas of research."

Troglodytes and religious fundamentalists raised barriers that would result in patients "suffer[ing] needlessly" and "put many critical future advances in medicine beyond the reach of patients in the United States." 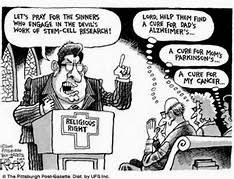 Yes, it's good ol' Human Embryonic Stem Cells, that were gonna cure Parkinson's, Alzheimers, and all the rest. That's if anyone could get past that bodily rejection thingie.Those who were opposed to grinding up embryos to make their bread were ridiculed as "anti-science" and the opposition of the Church was called, as was her earlier opposition to eugenics, another episode in the "war of religion on science."

I wonder if they would have also called those opposed to Nazi experimentation on Jews "anti-science"? Yes, I know. Godwin's Law and all that. But the point is that not every instance in which people put on white lab coats is quite the same.

Now, the only thing being opposed was killing human embryos in order to obtain stem cells to experiment with. No one was objecting to the use of non-human embryonic stem cells or of human adult stem cells (like bone marrow). And the usual course of research had been to work on animal models before going on to humans, so a few folks were bemused by the rush at that early stage to jump directly to the human subject. It's not as if benign therapies were going to burst fully formed from the brow of Zeus.

Well, science, as it often does, surprised the activists and in 2007 a Japanese researcher Shinya Yamanaka discovered how to "regress" ordinary cells to stem cell status ("induced pluripotent stem cells"). He was awarded the Nobel Prize in Medicine for this in 2012. There is an obvious benefit in that tissues can be developed in this way from a patient's own cells, thus bypassing the rejection problem. And you didn't have to kill anyone to get them.

Now, in a paper in Nature Biotechnology, Choi (et the usual al.) finds that induced and embryonic stem cells "are molecularly and functionally equivalent and cannot be distinguished by a consistent gene expression signature."

As time passed and induced stem cells became the preferred research material, noise about stem cell research has quietly faded from the news-smog. It's almost as if the point had always been to find a reason to use embryos.

Posted by TheOFloinn at 9:42 PM