The Demise of Free Guessing

It must be something in the water. Two more psychology "scientists" have been deceived into thinking that they have run an experiment on free will. But by the terms of their own analysis, they are mistaken. If we observe ourselves (unconsciously) perform some action, like picking out a box of cereal in the grocery store, and only afterwards come to infer that we did this intentionally, then Bear and Bloom must have observed themselves (unconsciously) perform an action like running an  experiment in the psych "lab,"and only afterwards came to infer that they did this intentionally. IOW, if we first pick up the box of Wheaties, then decide to choose it -- hmm. I perceive a box of Wheaties in my hand, so I believe I must have chosen it -- then how does this not apply to the decisions the experimenters think they made?

If this is the true sequence of events, [Bear blogs in Scientific American], how could we be deceived into believing that we had intentionally made our choice before the consequences of this action were observed? This explanation for how we think of our agency would seem to require supernatural backwards causation, with our experience of conscious will being both a product and an apparent cause of behavior.

Why they suppose backward causation is supernatural when telos is built into the natural world is unexplained. After all, the perception of the milk dish causes the thirsty kitten to cross the room. But not to worry. No self-respecting labcoater can specify a problem without also claiming to have solved it; not if he wishes to be published. Hence, in a study just published in Psychological Science, Paul Bloom and Adam Bear


explore a radical—but non-magical—solution to this puzzle. Perhaps in the very moments that we experience a choice, our minds are rewriting history, fooling us into thinking that this choice—that was actually completed after its consequences were subconsciously perceived—was a choice that we had made all along.

The abstract of their study runs:


Do people know when, or whether, they have made a conscious choice? Here, we explore the possibility that choices can seem to occur before they are actually made. In two studies, participants were asked to quickly choose from a set of options before a randomly selected option was made salient. Even when they believed that they had made their decision prior to this event, participants were significantly more likely than chance to report choosing the salient option when this option was made salient soon after the perceived time of choice. Thus, without participants’ awareness, a seemingly later event influenced choices that were experienced as occurring at an earlier time. These findings suggest that, like certain low-level perceptual experiences, the experience of choice is susceptible to “postdictive” influence and that people may systematically overestimate the role that consciousness plays in their chosen behavior.

The options are not just important, they are salient! One wonders if the researchers understood the meaning of 'salient.' Or did it simply sound more scientificalistic? Exactly how was an option 'made salient' rather than merely correct? Forsooth.

The experiment went as follows. WEIRD students were presented with five white circles at random locations on a computer monitor, one of which would soon turn red. They were asked to guess which of the five would turn red. The researchers claim the students would "choose" which circle would turn red. Since the guess was "in their head," it's hard to grasp how the researchers knew. But afterward, the student would indicate whether he had guessed right, wrong, or 'ran out of time' [i.e. the circle turned red before they guessed], presumably telling the truth. The metric was the frequency of a reported success out of all instances in which the student claimed enough time to guess.

"Unbeknownst to participants, the circle that lit up red on each trial of the experiment was selected completely randomly by our computer script." Unbeknownst? TOF would have supposed it so, but perhaps these were psych students. Actually, computers generate 'pseudo-random numbers', courtesy of an algorithm, so they were not 'completely random.' Accordingly, the psych dudes believed that the students could only possibly have guessed right 20% of the time, thus discounting precognition and the fact that runs of random numbers will ofttimes generate clusters above and below the nominal value.

When a circle turned red "especially quickly," students reported success above 30% of the time and Bloom and Bear fell into a fit of the vapors. Fortunately, reported success dropped to "near 20%" when the color change was delayed longer. IOW, when given enough time, subjects guessed correctly around the theoretical value, but when they were rushed they grew confused and guessed that they had guessed correctly more often than was likely [assuming no clusters in the runs].


...the people who showed our time-dependent illusion were often completely unaware of their above-chance performance when asked about it in debriefing after the experiment was over. Moreover, in a related experiment, we found that the bias to choose correctly was not driven by confusion or uncertainty about what was chosen: Even when participants were highly confident in their choice, they showed a tendency to “choose” correctly at an impossibly high rate.

The hidden assumption here is that one cannot be confused when highly confident. After all, Bloom and Bear are no doubt highly confident about their interpretation of their results. They conclude that


"Taken together, these findings suggest that we may be systematically misled about how we make choices, even when we have strong intuitions to the contrary."

Stop the presses! TOF is trying to imagine Aristotle or Thomas being surprised by this. Notice that BloomBear draw conclusions about being misled in our choices rather than being misled in our perceptions. They then have to explain why such self-deception is not a stumbling block [lit. 'scandal'] to natural selection. "Wouldn’t this illusion wreak havoc on our mental lives and behavior?" they ask.

Of course, they admit that they saw this effect only when the time scale was very short. And 30% is significantly higher than 20% only if the sample sizes were adequate and there were no clusters in the pseudorandom sequence of circles. There is no mention of the sample size, but TOF notes that students could have achieved the perfect desideratum of 20% by not choosing at all, and simply guessing the same general location each time. Thus, scores closer to 20% may be more indicative of of a lack of free choice than the higher scores.


A more speculative possibility [they write] is that our minds are designed to distort our perception of choice and that this distortion is an important feature (not simply a bug) of our cognitive machinery. For example, if the experience of choice is a kind of causal inference, as Wegner and Wheatley suggest, then swapping the order of choice and action in conscious awareness may aid in the understanding that we are physical beings who can produce effects out in the world. More broadly, this illusion may be central to developing a belief in free will and, in turn, motivating punishment.

This is apparently the key: motivating punishment. After all, if free will is an illusion, it would be unjust to punish someone for doing something wrong -- like engaging in politically incorrect speech or publishing papers in social 'science'. The authors worry that the mentally ill might suffer the illusion of choice even at longer delay times. The understanding that we are physical beings who can produce effects out in the world is probably indicated more directly by eating an apple than by subtle inversions in guessing games. In any case, more funding is needed:


It remains to be seen just how much the postdictive illusion of choice that we observe in our experiments connects to these weightier aspects of daily life and mental illness. The illusion may only apply to a small set of our choices that are made quickly and without too much thought. Or it may be pervasive and ubiquitous—governing all aspects of our  behavior, from our most minute to our most important decisions. Most likely, the truth lies somewhere in between these extremes. Whatever the case may be, our studies add to a growing body of work suggesting that even our most seemingly ironclad beliefs about our own agency and conscious experience can be dead wrong.

Quick! Break out the smelling salts! Bear [and likely Bloom] is having an attack of the vapors and is already reifying his theory about the data as if it were itself a fact. Even their most ironclad beliefs about their own experiment can be dead wrong. 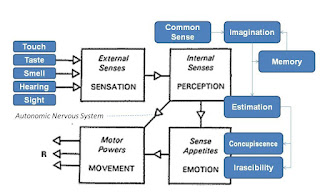 What any of it has to do with freedom of the will is a mystery. The students were not willing or choosing anything. They were guessing. And with great elaboration, the labcoaters discovered when the guessing time was real short the students could be real confused, even when highly confident. But the will is the appetite for products of the intellect and while it supervenes over sensory appetites, it has little to do with reflex actions. We do not will our stomach to growl when we are hungry, nor our knee to jerk when struck below the kneecap. The perception of color belongs to the sensory circuit, not to the intellective one. It is interesting, though unsurprising, that there might be an effect on the imagination equivalent to the jerk reflex on the knee. But imagination is not intellect, and errors in the common sense, imagination, or memory are not errors in the will.


James Chastek discusses this experiment also and shows how it can be interpreted differently:

IOW, understood in the classical way, the experiment supports the doctrine of original sin, identifying subconscious pride as the origin, one inherited from our remotest ancestors.

Posted by TheOFloinn at 5:08 PM

Labels: psyched out!, science marches on