A Glance at the Holocene 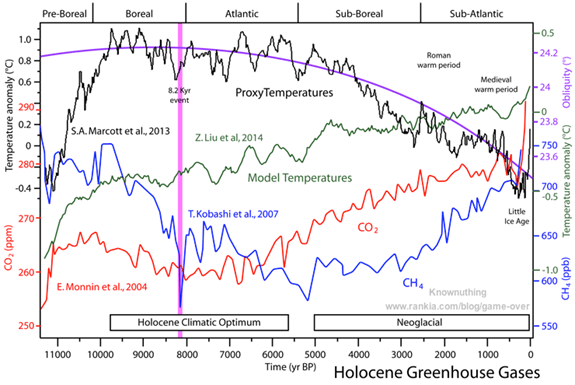 Unless I should say the "Whole Scene." Reconstructed "proxy" temperatures shown in black and model output temperatures in green are compared to atmospheric CO2 in red and methane in blue during the recent interglacial phase. When CO2 began increasing some 7000 years ago, global temperatures did not actually change and when they did, about 2000 years later, the world grew cooler, not warmer. The model outputs grew warmer, however. Notice that in the Modern Warm period, temperatures did increase when a special magical kind of CO2 took over. Either that, or a random fluctuation. In any case, a 5000-year long slide back into an ice age seems to have been temporarily stayed and temperatures have returned to medieval levels, and perhaps almost to Roman levels, although not nearly to normal levels for the interglacial, which were closer to +0.9°C

Data sources noted for each series on chart.