For a very long time, the Incomparable Marge knew nothing of her paternal grandparents, save that she had been named for the grandmother and, according to her father, this grandmother had been half-Choctaw. Nor had she been told the name of his father. Then. one day, back in the era of paper and postage, we secured her father's application for a Card of Social Security and one of the questions required the names of Claude's father and mother. And there stood her grandparental names: Jasper Moses White and Maggie Tam. The rest of this post is a cautionary tale for those searching Olde Recordes.

The first caution is that the old Copperplate handwriting style is such that we read the name at first as  "Maggie Jam," which is a seriously kool name, and much time and effort were lost looking for "Jam"s. Nothing popped.

Then Ancestry-dot-com disgorged a Texas marriage record for Jasper M. White and Maggie Fain, (19 Dec 1897, in Fannin Co, TX), and for a while we searched for Fain families. You might say we searched in fain. The old Copperplate script-T could be read as an F by eyes or scanners trained in the Palmer Method.

As well as by character-recognition algorithms that purport to convert script to Millennial-friendly typeface. Hence, "Fain" could be a misapprehension of "Tam." The "-in" being an "m" and the old-style T mistaken for an F. Without the original handwritten record, that remains only a surmise.

As illustration, the Artificial Intelligence believes the following Census entry reads "Bowling house" but the natural sort recognizes it as "Boarding house."

because keeping a boarding house was so much more common on the frontier than keeping a bowling "house."

Jasper was easier to track down than Maggie. After all, how common could a name like "Jasper Moses White" be?

Remember the Rule of Two?

A second caution. "Jasper" was not an uncommon handle back in the day, and records don't always cite middle names, so there were a host of "Jasper White"s and "Jasper M. White"s to sift,. But a court case put a Jasper White in Fannin Co., TX, so we looked there and Lo! in the 1880 Census for Fannin Co, TX Jasper White appeared as the 1 yr old son of Geo. W. White (42). Since Claude was born in 1898, 1879 seemed a reasonable birth year for his father. Next farm over was Ransom White (73), a reasonable candidate for Jasper's grandfather; and indeed, in the 1860 and 1850 Censuses, Geo. W was listed in the household of Ransom White.

A third caution. While 1880 listed everyone in the household by relationship to the head (so we know Jasper was the son of George W.), this was not so for 1850, 1860, or 1870, which while listing all household members, did not disclose their relationships. Since in 1880, some folks were listed as "farm laborer" or "boarder" or "niece," et al., determining relationships for earlier Censuses can be tricky.

In 1840 and before, only the heads of households are listed, everyone else simply tallied by age interval and sex. So even deducing the names can be tricky.

A fourth caution: the 1890 Census was lost in a fire, so there is a big gap between 1880 and 1900. We searched 1900 Fannin Co for a 21-year old Jasper with a 2-yr old Claude. No luck. Perhaps after marriage, Jasper and Maggie had left Fannin Co. But in that case, all bets were off. They could have gone anywhere. Their descendants eventually wound up in Tulsa; but the in-between was foggy.

A general search finally unearthed Claude in 1910, where Claud L White (11) is listed as a son of Maggie L. Roberts (30) in Ft. Towson, Choctaw Co., OK. Also listed is Ritchard W White (6), whom Margie remembers as her Uncle Dick who "moved to California." Eureka! BTW, note that spelling was often "nonstandard".

Maggie is listed as head-of-household and her marital status is "M3" which one takes to mean "3rd marriage." Jasper is not in view; neither is Mr. Roberts, although there is a Roberts family next door. She is 4 years into the present marriage, and has had three children, two of whom are still living. Maggie's occupation is given as Keeper of a "Bowling house" by the scanner. Who knows how many researchers have accepted that as received wisdom? (See, first caution.)

A fifth caution.  The Census takers did not always get things right. Sometimes people forget or the census-taker doesn't hear right. The informant might have been someone not in the household. (You didn't have to be home to be enumerated!) The more questions Uncle Nosy asks, the more opportunities to get things wrong. Two examples from the Flynn side: 1) In 1900, the widow and children of John T. Flynn were living with the family of youngest daughter, Bridget Sawyer. The census taker listed them all as "Sawyers" and gave their relationships as to Bridget, not head-of-household, Tom Sawyer; 2) In 1860, Ann E. Lynch, who would one day marry the aforesaid John T. Flynn, was listed with her parents, Daniel and Bridget Lynch in Washington Twp,, Warren, NJ. and also where she worked as a domestic servant for a farmer named A. Miller. So, she was counted twice.

As in some earlier Censuses, the 1910 asked Place of Birth, Father's Place of Birth, and Mother's Place of Birth without any supposition that these questions would frighten anyone from responding. One nearby family, for example, answered "Mexico" for all three for every family member. (The Census also asked what language each habitant spoke. That family spoke Spanish.)

The 1910 Census states that Claude was born in Oklahoma; but there was no Oklahoma when he was born Perhaps Indian Territory was meant. Later, in another document, he claimed to have been born in Durant, OK.

A seventh caution.  The past is a different country. The boundaries of counties changed as new counties were budded off, especially in a region's earlier years. And the region called Indian Territory was especially fraught. In 1900, it was the home to the quasi-idependent Indian Nations. (Indeed, the area was often called "The Nations" in popular parlance.) The area that included Durant, Hugo, Ft. Towson, et al. was part of Choctaw Nation, which had radically different counties than the state that was later erected. To make matters worse, the 1900 Census was by numbered Township-and-Range, not county. There were few roads or even trails. It was the place people went to get 'off the grid.' Robbers' Cave, a favorite outlaw hangout was in the San Bois mountains, east of Bug Tussle.

TOF is proceeding through this Census one line at a time, thinking to spot a recognizable name. He has reason to suspect the Tams were resident near Hugo in modern Choctaw Co., and Claude once claimed birth in Durant, in modern Bryan Co., now the capital of Choctaw Nation.

On the other hand...

An eighth caution. Cross-referencing should be done carefully

Ancestry produced a record for a Jasper White dated 1901/1903. But is it the same Jasper? The record shows him born in 1878 in Texas - check; his father born in TN - check; and his mother born in Indian Territory. His occupation is Laborer and he is a resident of Honey Grove, Fannin Co., Texas, near Bonham (see map, above). This is consistent with our Jasper with the exception of his mother's birthplace. Cynthia Marlow White was mostly born in Missouri (e.g., when she was with the Marlows) but in some later records she is born in Alabama, Mississippi, or Texas. So Indian Territory is not a deal breaker.All the 'heterodox' birth states came via Jasper, who was only 11 when his mother died, so he might not have remembered where she was born.

The aforesaid entry alas appears in the Texas Convict Records for Huntsville prison, Walker Co., TX, where Jasper is serving a 2 year sentence for "theft of  a horse." He pled Not Guilty and was released a couple months early, in January 1903. Their second son, Richard, was born a year after; but if by 1910 Maggie had been married to Roberts for 4 years, then she and Jasper split before 1906. By 1912, Jasper had remarried and was in Mississippi then Louisiana, far from the rest of his family. [We know this was the same Jasper because his eventual obituary named brothers and sisters from his father's family in 1880.]

A ninth caution. Be prepared for serendipity. Ya never know. On one of its periodic fishing expeditions, Ancestry produced a 1918 petition for the guardianship of Claude and Richard White. Maggie is dead, and she is named Maggie Davenport. But we know this is the long-sought Maggie because not only are the kids White, but the guardian named is her brother (their uncle) George T. Tam. But had the record only mentioned Maggie Davenport, TOF might not have even read it.

Claud needed a guardian because he was a child of only 19. Definitions of "child" have changed over time.


There was also an executor, her husband George Davenport, who was to disburse the money from a settlement from the Frisco Railroad for wrongful death.


"while riding as a passenger upon of the railway trains of the St.Louis-San Francisco Railway Company [a.k.a. the Frisco], in Choctaw County, Oklahoma. at Long Creek Bridge, near Hugo, Choctaw Co, OK by reason of the derailment of Train No.716 [en route from Hugo to Antlers. See map, above] when said train went through said bridge, causing her to be violently thrown from her seat in a car in said train, against the seats and sides of said car, in consequence of which she sustained fatal injuries."

That's pretty gruesome, and it means three generations of Whites lost their mothers at a young age. The guardianship was judged in Tulsa Co. and the 'estate,' which consisted solely of the settlement from the Frisco, was adjudicated in Pushmataha Co., where the accident presumably occurred. 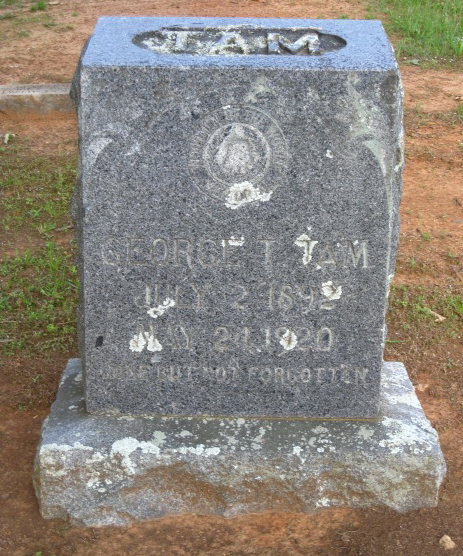 Even more gruesome, in 1920, the guardian, George Tam, died in a gas explosion at The Texas Company refinery outside Tulsa two years later. Claude petitioned the court to dissolve the guardianship for him, as he was now 21. He also asked money from the settlement to take his uncle's body to Hugo for burial. The guardianship for brother Dick was reassigned to the grandmother, Louisa Tam.

So we have gone from knowing nothing about the Marge's paternal grandparents to reasonable certainty back to 1811 and possibly to 1776.

Now, you may have noticed that this does not leave much wiggle room for Maggie to have been half Choctaw, Choctaws not being plentiful in 1880 Tennessee, when she was born. 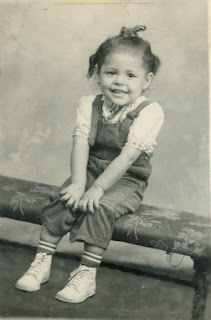 Posted by TheOFloinn at 8:08 AM