Historian John Lukacs once stated that between 1870 and 1920, the lives of people in the cities of the Western world changed more than they ever had before, or even after. He was writing in 1970, and so comparing 1920-1970 to 1870-1920.  To the people of the 1920s, much of world of 1970 was already in place. They had skyscrapers and subways, telephones, automobiles, airplanes, radio, motion pictures, and other modern appurtenances. The hologram had been invented. Computers using punched cards had been used to tabulate the Census. Both quantum mechanics and general relativity were already au courant. The first successful jet airplane had taken off (not the first successful jetlanding, however. Some trees intervened and Coanda moved on to fluidics.) Lemaître introduced the Big Bang in the 20s, though few people noticed. By 1970, everything had gotten better, bigger (or smaller) or faster. Airplanes had lost their propellers and movies gained color and sound. Radios had acquired pictures and you could carry a small AM radio in your shirt pocket. Telephones were becoming portable; but these were differences of degree, not of kind. Very little of 1970 would have gobsmacked someone from 1920, not in the way 1920 would have astonished someone from 1870..

AD 1920 has the advantage of being an even 100 years ago, this year, a nice celebratory number. Earlier, over half of Americans lived in small, rural towns. Soon, more than half will live in big cities. A substantial number of American men had "seen Paree" in 1918, and it would prove hard to "keep them down on the farm" after that. The year 1920 was when the Modern came of age.

Let's take a cross section of 1920 by glancing at the Flynncestry of the time. These fall into two groups: the immigrant/children of immigrant working class in the small-town East, most working in factories of one sort or another, and two being killed on the job. The other group, ancestral to the Incomparable Marge, is Western, in small-town Oklahoma, most [but not all] farming.

1. First off, we have Daniel J. Flynn, TOF's great-grandfather. Daniel was 47 in 1920, according to the Census.  Dan had gone to work at 10 yrs to support the family after his immigrant father, John Thomas Flynn, was crushed in the railroad repair yards in Washington, NJ. He and his older brother would hop a freight as it rolled through the shanty town and went through the tunnel under Schooley's Mountain to work in the nail mill at Oxford Furnace. Later, he got a job at a shoe factory, first in Newton, NJ, then in Newark, NJ, where he married Matilda Loretta Ochenfuss, originally from South Easton, PA. In1920, they are living at 315A Dugan's Alley,Ward 5  Phillipsburg, NJ, and he was working as a repairman at a cement mill (in Martins Creek, according to TOF's grandfather). Living with them were their children James John (25) a crane runner at the pump works, Francis Thomas (19) a blacksmith at the Steel Mill, John Daniel (18) a machinist at the Steel Mill, as well as Catherine A. (12), and Daniel Joseph Jr (3). Another child, Martin, had died seven years before of diphtheria just a few weeks shy of his fourth birthday in the family home, then at 161 Lewis St. \

Francis later recollected, "My mother [Matilda] and her mother [Mary Drake] spoke German, especially when the 'big-eared Flynn' was around, because I didn't understand, y'know. The consequence was that when I did start school, my first nickname at school was 'Dutch.' 'Dutch Flynn!' Can you imagine that? 'Cause I got my wees and wubbleyous all fouled up from listening to my mother and her mother talk."

Francis will start work at the Lehigh Valley Railroad this year, where he will run the dining cars. He reported lying about his age, telling them he was 21 when he had just turned 20.

Daniel's mother, Anne Elizabeth Lynch Flynn (73), is living with Dan's sister, Mary Bridget Sawyer (38) and her husband Thomas Henry Sawyer (48) and their children on S. Bridge St. in Morrisville, Bucks Co., PA. She was born on American soil a few days after her parents, fleeing the Famine, crossed over from Canada. Dan's other brothers also lived in Morrisville and worked at Vulcanized Rubber in Trenton.

Around the corner from Daniel, on Chambers St and Washington St the Census lists households where they speak Italian, Spanish, German, French, Lithuanian, and Polish. (The 1920 Census asked whether the individuals were citizens or not, and what languages were spoken by the respondent and the respondent's father and mother.)

Among these immigrants was Fernand Ernst Octave Cantrel (59). He had come from Quoeux, Pas de Calais, France near the Belgian border, and had served in the French artillery during the Tonkin Gulf Expedition that conquered North Vietnam. He had emigrated in 1888 and was naturalized in 1894. In 1920, he is married to Mary McGovern Dieda Cantrel (64) who had emigrated in 1875 from The Glan, Co.Cavan, Ireland, where she had worked as a schoolteacher. She had earlier married another Frenchman, Louis Dieda, and lived in a wooden cabin in Harker's Hollow, Warren Co, NJ. She naturalized in 1894. In 1920, Fernand and Mary live at 347 Firth St. Phillipsburg Ward 6  with five grown Dieda and Cantrel children, incl. Blanche Jean Cantrel (20), plus one teenager. Fernand describes himself as a "gentleman tailor" and works at the nearby silk mill.

Fernand Cantrel and Daniel Flynn are volunteer firemen with the Reliance Hose Company #2. Daniel is a lieutenant (holding a trumpet in the picture) and is fourth from the right, front row. Fernand is two seats away. second from the right. The picture is taken 1922. Daniel's son, Francis, will soon marry Fernand's daughter, Blanche. 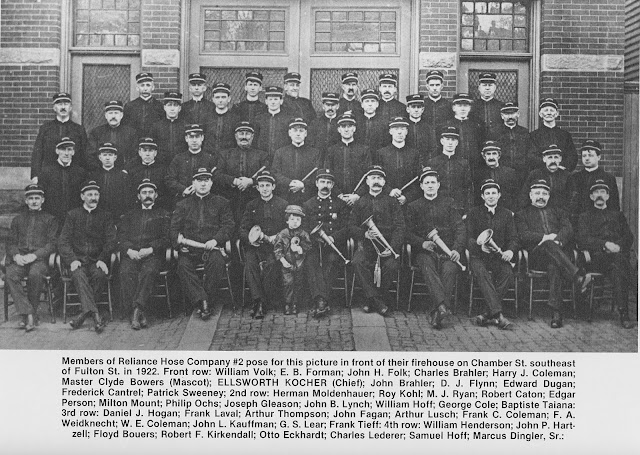 Meanwhile, across the river in PA, Anthony W Singley (56) a laborer at Bethlehem Steel, is living at 1048 Delaware Ave. in Fountain Hill, with his wife Sarah Jane Metzger (50) and daughter Lavinia (23) and her husband Robert Young (26) and their boy Robert (2), plus another granddaughter, Etta Singley (4). In two years, Anthony will be killed at the Steel when he is run over by an ore train.

Anthony's son, Harry Francis Singley (27) is a bricklayer, and newly married to Helen Myrtle Schwar (23), they are living at 201 W. St. Joseph St, Easton Ward 10. (The house no longer exists. It was torn down when St. John St. was widened.) He is a veteran of the Argonne Offensive in Great War. His nickname then was "Banty." In later years, TOF knew him as "Guv."

A block away, at 332 W. St Joseph St in Easton Ward 10, lives the stone mason, Joseph Francis Schwar (49), Harry's father-in-law.. Born in PA to immigrant parents, now deceased, he speaks German. His wife, Frances Hungrege (49) is also the daughter of German immigrants. They have nine children living with them, one of whom, Leo Martin (25), is also a stone mason. The older girls, ages 21, 20, and 18, are working at a silk mill. Easton at the time had several textile factories.  This year, Joseph is building a new house at 602 Folk St. in South Easton.

Meanwhile, elsewhere in the country...

1920 was a bad year for Claude Lee White (22), father of the Iincomparable Marge. Two years previously, his mother, Maggie Tam White Roberts Davenport (38), had died of injuries sustained in the 5 Apr 1918 derailment of Train 716 of the Frisco Railroad (Hugo to Antlers) at Long Creek Bridge, near Hugo, Choctaw County, Oklahoma.  Her third husband, George Davenport, had been a Choctaw code talker in the Great War, but custody of Claude and his brother, who were her children by her first marriage, had been given to her brother George T. Tam. In 1919, Claude had been working as a mechanic for the Charles Lukins auto company and rooming with his late mother's brother, J.J. Tam in West Tulsa, along with grandmother Louisa Synesker Eads (60) and uncles Clisby and guardian George (28). George was not much older than Claude. He had managed to get charges against Claude dismissed when in the aftermath of his mother's terrible death, the teenager had acted out and burglarized a hardware store. Claude's only assets was the wrongful death settlement from the Frisco Road.

But then on 13 May 1920, George Tam is injured in a gas explosion at the Texas Company refinery in West Tulsa where he works. He is "seriously burned, suffering great physical pain and mental agony" until he dies a week later. Claude takes his uncle's body to Hugo (Choctaw Co.) for burial. Guardianship of his brother Richard (16) is transferred to the grandmother Louisa Synesker Eads (60) and that of Claude terminated because he reaches 21 yrs on 11 Sep 1920. Two months later, on 20 Nov 1920, Claude marries his first wife Bonnie Crawford in Tulsa, OK.

In 1920, Claude's father (and Maggie's first husband), Jasper Moses White (45), is a farm laborer living in Wildsville, Concordia Parish, Louisiana. He is the son of the late George Washington White and Cynthia Ann Marlow. (It is through Cynthia's grandfather that the Whites claimed Choctaw ancestry.) Jasper is married to his second wife Lillie Reagan (32) and has three kids aged 1 to 7. Born in Fannin Co, Texas, Jasper had married Maggie Tam in 1897, when he was 23 and she was 17. In 1901, he was convicted of horse theft and sentenced to 2 years in Huntsville, TX, prison. Shortly after his release to, he and Maggie split. Jasper went to Arkansas, then Louisiana, and Maggie (with Claude and Richard) went to Ft. Towson, Choctaw Nation.

Harrison Hammontree (54), a farmer, is living in Beaver Twp. Haskel Co., OK. He is married to Cordelia A Jones (53) and has three kids. (Cordelia's mother, Ellen (75) may be living in neighboring LeFlore Co, OK, with husband Benjamin (75).) The Hammontrees had appeared in Northumberland Co, Virginia in 1719 and migrated to East Tennessee, Thence to Arkansas, finally to Pittsburgh Co, OK.

Harrison's son, John B. Hammontree (23), a farm laborer, is married to Ora Vanora Harris (18) and living in Blocker Twp, Pittsburg Co., OK, with their daughter Jewell (2).

Ora's father, Charles Harding Harris (42) is farming next to John B. with seven other children  His wife, Sadie Frances Holland, had died two years ago.  (His father Joel Harris may still be living in Phelps Co., MO. The identification is uncertain. There was more than one Charles Harris.) The Harris clan had come out of Hardin Co, KY, where one ancestor had been neighbors of the Lincolns.

Sadie's father, Henry Thomas Holland (60) is a farmer in Burney, Love Co., OK. in the old Chickasw Nation with his wife Annie Elizabeth Helms (58). He had originally come from Louisiana, though his parents had come from Mississippi and Georgia, resp. She had been born in Georgia to parents from North Carolina.

That covers most of the ancestors who were kicking about in 1920. They were mainly poor, some literally 'dirt-poor' or working class. Probably the wealthiest is Joseph Schwar, who is building a house large enough to accommodate his family, but he will lose that house in the coming Depression. In contrast, Joel Harris appears to have lived in a log cabin in Missouri. The biggest city in which any of them lived was Tulsa, which in 1920 had a population of 72,000. The workers were in steel mills, railroads, oil refineries, and factories. Some did contract work in stone or brick. Otherwise, the saw the south end of a north-bound plow-mule. The phrase "office worker" would have seemed to them an oxymoron. Francis Flynn had spent one semester at Catholic University in the Cadet Corps, but had dropped out when the war -- and the cadet program -- ended. That was the highest rung of education any of them achieved. But when Francis Flynn was not quite 4 yrs old, he heard about the Wright Brothers at Kitty Hawk. When he was just past 69 yrs old, he watched men walk on the moon on TV in his own living room. He had gone through the Singularity.

Posted by TheOFloinn at 1:36 PM