We live in exciting times, when we are finally beginning to understand the workings of evolution.

One of the things Aristotle said about living beings is that they contain within themselves the principles of their own movement.  The more we learn about genetics, the more this seems true, down to the deepest levels.   In  his latest blog on natural genetic engineering, James Shapiro has some interesting things to say.  It is worth quoting the entry extensively.

First caution.  By "natural genetic engineering" (NGE) Shapiro does not mean an explanatory principle, but rather all the biochemical mechanisms cells possess to "cut, splice, copy, polymerize and otherwise manipulate the structure of internal DNA molecules, transport DNA from one cell to another, or acquire DNA from the environment. Totally novel sequences can result from de novo untemplated polymerization or reverse transcription of processed RNA molecules."

Doctor Shapiro notes a crucial point that is often missed by non-statisticians; namely, the distinction between non-random and determined.


NGE operations are not random. Each biochemical process has a set of predictable outcomes and may produce characteristic DNA sequence structures. [But t]he cases with precisely determined outcomes are rare and utilized for recurring operations, such as generating proper DNA copies for distribution to daughter cells.

It is essential to keep in mind that "non-random" does not mean "strictly deterministic." We clearly see this distinction in the highly targeted NGE processes that generate virtually endless antibody diversity.

The cell functions collectively called NGE generate "novel DNA structures" and help clarify rapid evolutionary change. Rapid changes include
Making life more interesting, we have learned that cell functions can turn on and off in response to sensory inputs; and can target particular locations in the genome. That is, "external stresses and life history events activate NGE genome change operators."  This means that high stress situations, like major ecological disruption, can actually trigger speciation, not simple select.

Most intriguingly he refers backhandedly to natural selection as being used by some biologists "to cover gaps in their accounts of adaptive novelties."  That natural selection can be used as a "theory of the gaps" has its amusing side, but biologists like Gould, Orr, and others have in the past expressed some exasperation with hand-waving just-so stories. 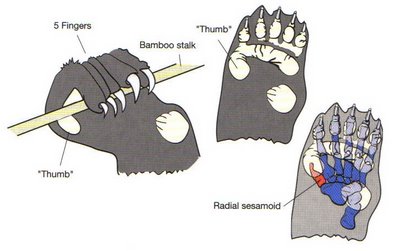 Shapiro had one particular puzzle:


While NGE can help in understanding the molecular details of rapid and widespread genome change, it does not tell us what makes genomic novelties come out to be useful.

But one possible handle on that aspect is to take into account the organism itself.  What makes any "genomic novelty" useful is the organism that makes use of it, as for example, the way the red panda made use of a fortuitously protruding wrist bone to strip the leaves off bamboo poles.

The net result is that rapid evolutionary change is the norm, not the exception, which knocks into a cocked hat objections to evolution based on probabilities of small incremental changes.  If the changes are not statistically independent but mutually correlated you might get massive changes right quick.