when going into his second heart surgery? 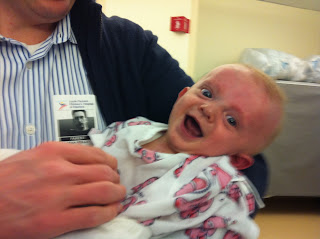 He obviously has complete confidence in his parents and the pediatric intensive care doctors, nurses, and technicians.  How could it be otherwise?

For those wondering, he is my cousin's grandson, named Colin, which makes him my first cousin twice removed.  (The cousin is my milk-sister cousin, who is on the German side.)  He came through the first operation with flying colors, and there is a third one in his future.  His father had this to say about his present travails:


Well, Colin always seems to have a few tricks up his sleeve for the CVICU doctors and that means he is still in the CVICU recovering as of today. Earlier in the week, he developed a fairly painful stomach issue, which the GI doctors believed was caused by the stress of the hospitalization. We agreed on a comfort plan with the doctors and after a couple days of strong anti-acid meds he seems to be back on track. Today we are beginning to limit the anti-acid meds.

As noted in an earlier post, the surgeon rerouted Colin’s MAPCAs into the pulmonary arteries. The left and right pulmonary arteries were then surgically connected to the aorta (a central shunt). The result of this surgery is increased blood flow and pressure to the lungs, which requires several days for the lungs to adjust with ventilator help. Colin’s adjustment process has been slow and is still he is receiving considerable help from the ventilator (with a CPAP mask – he is not intubated).

The best analogy that was provided to me with respect to Colin’s progress is the following. If you think of the lungs, when deflated, like a deflated balloon that you want manually to blow up. The balloon will not inflate unless that first push of air into the balloon is strong enough to begin inflation, and then less pressure is required to continue inflating the balloon until it has reached its optimal size. If we apply the analogy to Colin, the ventilator is keeping some air in Colin’s lungs after he exhales; therefore he does not have to work so hard to inflate them in order to maintain the optimal oxygen levels in the blood, which [the blood] is now flowing into his lungs at an increased rate and pressure as a result of the surgery. The doctors have gradually attempted to decrease the ventilator setting that keeps air pressure in his lungs upon exhalation, but Colin has not been able to progress past a certain setting for several days….. until today! Today, he has tolerated a lower setting, which is really good news. On top of that, he has been very interactive and is in obvious much less discomfort and stress. In additional, Colin has been displaying much more energy – for example, he has been extremely aggressive with his pacifier, which he has generally not wanted until today, and has been elusively attempting to figure out ways to take the CPAP mask off.

So we hit a few speed bumps over the last few days, but seem to be back on track now! Fingers crossed. Prayers and positive thoughts continue for steady progress from this point forward. Today was a good day and we are enjoying it.

I am as certain as anyone can be that no one will want to wipe that smile off Colin's face.  It's something the world has not enough of these days.
Posted by TheOFloinn at 2:28 PM