Chapter 5. The Allegory of the Printing Plant


You may think, the old curmudgeon told Jack, that the allegory of the printing plant involves a shrub who could not write cursive.  But although such a tale has a certain whimsical charm to it, our allegory is set more prosaically in a place that printed technical journals.  They produced serials for such organizations as IEEE, ACS, Audubon, et al. They printed Physics Today, The Journal of Astronomy, and numerous other such things.  They employed degreed chemists as proofreaders.  Many of the journals were printed on flatbed Miehles from hot lead type in 300-lb forms.  The sheets would often hold sixteen or thirty-two pages on a single impression. There were web presses, of course, and perfectors, and even an offset web.  These were the Old Days, and printing a magazine was no job for weenies, let me tell you.

One day, this plant was graced with a new manager.  He held an MBA degree, which is to say he knew everything there was to know about running a printing plant, save what was important.  He studied the P&Ls and called the superintendents in for a meeting.

"I have discovered the single biggest cost in our operation," he told them.

"Tell us this thing," the superintendents responded, "for we are always anxious to reduce our costs."

The plant manager posted his finger.  "Paper," he announced with a note of triumph tinging his voice.

The superintendents looked one to another.  You can imagine how astonished these Master Printers were to learn that paper was the biggest cost in a printing plant.

"What shall we do about it?" asked one, not without some fear in his voice.  Perhaps he intuited what was to come.

"We shall cut costs by buying cheaper paper," the manager declared.  Actually, he said "less expensive," but you know the drill.

And so it was, for the word of the manager was sooth in the land, for he had MBA after his name.

Soon, a strange thing happened to the costs in this plant.  They went up, not down.

And all this because the manager did not realize that he was not buying paper; he was buying the qualities of the paper: qualities like longitudinal tensile strength to endure the tension on the web as the rolls ran through the web presses; like surface finish so that a clean impression might be made upon the surface.

Alas, the cheaper paper was deficient in these qualities.  The web frequently snapped in the press and the free end of the paper would wrap itself around the rollers tighter than a drum head.  The press had to be stopped and the paper scrubbed off with steel wool and kerosene by the flyboys, who became in consequence ink-stained wretches and somewhat flammable.  Furthermore, folios at the end of the press had to be scrapped because the remaining portions in the press had been crumpled and destroyed.  Scrap went up, downtime went up.

In addition, the surface finish of the paper was rougher, closer to newsprint than to magazine paper.  Consequently, "picking" increased.  Picking is a defect which occurs when the force of an ink film exceeds the paper's surface strength. When the plate pulls away from the paper, it pulls paper fibers from the surface of the page.  This often happens when large inked areas are applied, as in newspaper photographs, leaving little white specks in the inked area.

You recall that they printed the Journal of Astronomy.

That plant lost customers they had had for many years.

So much for "cutting costs."  The manager had not cut costs at all; he had increased them.  What he had done was spend less money, and as this allegory shows, this is not really the same thing at all. 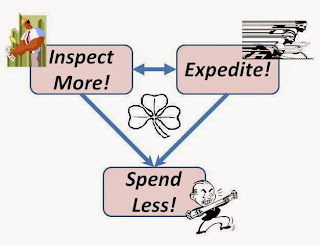 Jack remembered that something similar had happened at his plant.  An "efficiency expert" had told Jack's predecessor that maintenance personnel spent only 50% of their time actively maintaining equipment.  Therefore, he had recommended laying off half the maintenance department.  The remainder could then spend 100% of their time maintaining things. Greater utilization of staff.  Five years later, the plant was falling apart around their ears and no one could figure out why.  Six years later, Jack had gotten the job.

The old man wagged a finger.  "You can't deal with costs directly.  Costs are only a symptom."

"You said that problem-solving starts with the symptoms."

"But it doesn't end there.  You have to deal with the causes of the costs. For the same reason, you can't improve quality by more inspection, and you can't reduce cycle times by expediting.  Which brings us back to your problem with demurrage."

to be continued...
Posted by TheOFloinn at 5:18 PM