Chapter 6. The Journey of a Thousand Miles

"I was hoping," Jack said, "that we would get back to that before I had to get back to the office.  So, tell me, Grumpy, how I can convince corporate to fund a new storage tank so I'll have enough capacity to off-load all the tank cars each month."

The old curmudgeon shook his head.  "It's all that salad you eat.  It goes to the head and turns it to cabbage.  Don't assume that the solution is a bigger storage tank until you've walked a mile in the symptom-cause-remedy shoes."

Jack scowled.  "Aren't you straining a metaphor there?"

"Best I could do.  I told you, you have to start from the symptoms.  The excessive demurrage."

The old man nodded.  "Admirably succinct and too the point.  The problem is that it's all wishful thinking.  It isn't supported by any facts.  When I say start with the symptoms, I expect you to describe the symptoms."

"Not everything is measurable!" Jack protested.

"Probably not.  But demurrage can be measured, surely." 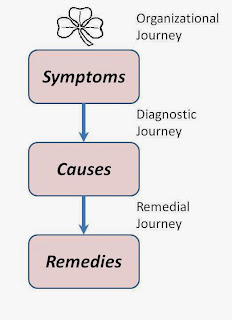 Jack waved his hand.  The waitress came and handed him the bill and he inspected it while the old curmudgeon explained.

The curmudgeon pushed out his lips.  "Okay, if you insist.  Three.  But let's not worry about the first journey for now.  That's the Organizational Journey.  That involves identifying user needs, scoping the problem, and organizing a team to work on it."

Jack did not fail to notice that there were three tasks within the Organizational Journey, but said nothing.

"But a Sherlock Holmes problem needs two journeys.  The Diagnostic Journey is from symptoms to causes.  The Remedial Journey is from causes to remedies. This was a distinction made by Joe Juran, back in the day, in his classic study of managerial breakthrough."

Jack had never heard of this Juran but to avoid the curmudgeon's scorn he kept his mouth shut.

"The reason why so many problems do not get solved," said Grumpy, "is because everyone wants to make the Remedial Journey.  They jump to solutions right away, for the obvious reasons."

Jack handed his Black Card to the waitress, who smiled and thanked him.  He watched her go, reflecting how much of life is built on trust.  The vast majority of people, he was convinced, wanted to do a good job.  "What are the obvious reasons?"

The curmudgeon seemed amused.  "If they're obvious, you can tell me."

Jack wondered if there were supposed to be three of them.  "Well,  obviously, managers are paid to solve problems and that means putting in a solution, the more quickly, the better."

"Bingo, Jack. Once upon a time, there was a defect called 'Offsetting' that required Quality Control to write a Corrective Action Request to Production.  This happened again and again.  Finally, Production returned a CAR with the comment: 'Engineering has already fixed this problem… five times this week!'"

Jack had to laugh at that one.  It was always someone else's fault, wasn't it? 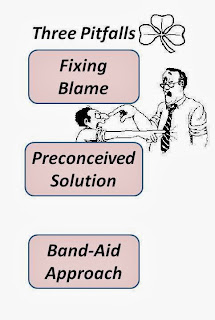 "The problem wasn't getting solved," Grumpy went on, "even though action was being taken.  One of the reasons, as you said, is the mad rush to solve problems!  This can lead to hasty and poorly-thought out actions that fail to get at the real cause of the problem.  There are three pitfalls to beware of: Fixing the blame, when it seems more important to learn who was at fault (or to avoid being the “who”).  The preconceived solution, when everyone already 'knows' what to do, and jumps to a conclusion about either the cause or the remedy.  And the band-aid, when the solution responds only to the immediate pressures and takes no account of the long term. If they would only make the Diagnostic Journey, they could save themselves some agita."

The old man took on a thoughtful look. "If the solution is to build a bigger storage tank, who has the responsibility?"

"If the solution is better training of the pumping station personnel...?"

"If the solution is repair and upgrade of the pumping equipment?"

"If the responsibility is to diagnose the causes?"

Jack opened his mouth, then closed it and fell silent.  "I get it.  People jump right into the Remedial Journey because once they know..."

"...or think they know the solution, it's clear who has the responsibility to act."

"But no one has the responsibility to diagnose."

"It's everyone's responsibility to diagnose problems."

"Which means no one does.  Responsibility = 1/n², where n is the number of people sharing the responsibility.  No one makes the Diagnostic Journey because it's no one's particular job to make it."

The waitress brought back the slip and Jack reviewed it and signed, leaving a 20% tip.  He handed the folder back to the waitress and tucked the receipt into his wallet.  "So, help me out here.  How do I get started on this diagnostic journey?"

"Simple.  Just start by describing the symptoms.  What is the size and shape of the problem?  How much demurrage are you paying?  On which chemicals?  When did the problem start?  Is it getting better or worse over time? Is there more than one pumping station?  Okay, then which pumping station is affected?  Just wrap your arms around it."

"How will that help me?"

"Beats me.  Let me tell you the Allegory of the Check Sorting Process."