Three in One Oil

Today is Trinity Sunday, a Solemnity. The concept it one of great bemusement and wonder to all. How can this be? How can three be one? How can one be three?


Well, it's not as simple as arithmetic; nor even as simple as a triangle, which is One precisely because it is Three. The sides (or angles) are not themselves the triangle, any more than the leaves are the shamrock. Nor, for that matter, that TOF the Father seen by his children, TOF the Son seen by his parents, and TOF the Lover seen by his wife actually comprise One TOF. These are all what we call "analogies" back when analogic was taught in schools.¹ Like all analogies, they are incomplete and thus subject to attack by the quasi-literate,² who suppose them to be exact equivalences.³ Like similes and metaphors in literature, the analogy can be illuminating and give us a handle on something we don't quite get. For example: "The action of gravity is like the solution to the equation F=GMm/d²."


Notae bene:
1. analogic. How analogy was dropped from standardized tests is a scandal, but one which TOF cannot openly discuss, since it derives from proprietary client information back in consulting days.
2. quasi-literate. For example, those who insist that the plural of octopus is octopi. (It's actually octopî, pron. ahk-to-pee.) But they never say "The girl saw the octopum."
3. exact equivalences. Electrical engineers used to use (and still may for all TOF knows) hydraulic analogies to construct models of electrical circuits on sand tables: current = current; voltage = waterfall; resistance = obstructions; etc. But no engineer was so foolish as to plug his toaster into the faucet.
2. d². It's an exponent this time, not a footnote.


As regards the Trinity, one supposes some prior conclusions. If man is made in "the image of God" and Adelard of Bath wrote that "it is through reason that we are human," then we must conclude as Berengar of Tours did that it is "by virtue of reason man¹ was made in the image of God." Hence, there must be in God something that is analogous to reason in humans; that is, to intellect and will.


1. man. Do we need to go through this every time? "Man/men" from *men- a thinking being; hence: mental, mind, etc. The term was not used to refer to adult males until the 1000s. Before that, AS used wer and wif.


Thomas Aquinas explored this in the following manner.

Each act is a predicate having a subject and an object. The subject of both -- the Knower (or Conceiver) and the Lover -- is God and in this manner he is the Father.

Since the Father loves the Truth as being Good, his love proceeds outward and returns to him with that love. As the object of the predicate of desire, we call him the Spirit and say he "proceeds from the Father." 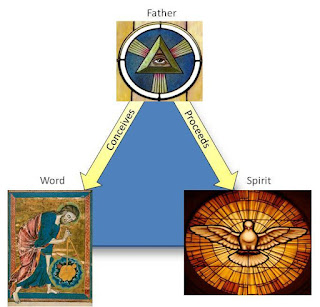 Since intellect has no other predicates, there are no other processions than these two, whose objects together with the subject comprise three distinct persons. One also sees that since there is no compounding in God, his Intellect and Will are one and the same thing: the Truth is the Love. So God is Love, and God is Truth

However, since Aquinas had previously shown that there are no potencies in God, and that God is simple and undivided, these three must be one. If for example the Word was different in being (substance) from the Father, there would be some power or attribute possessed by the Word that was not possessed by the Father, and the Father would be in potency toward that power or attribute, which contradicts both the simplicity and the actuality of the Father. Hence, they are consubstantial. And so on.

Aquinas did not claim complete understanding from these little theorems of his -- he later said that they were only a little straw -- he desired only to show that such beliefs were reasonable. How the three Persons could be distinct in person while one is being is a mystery. But then there are lots of things about people that amoebae do not understand, and the gulf here is unimaginably greater.

Posted by TheOFloinn at 8:06 PM