A lizard riding a horse

Faithful Reader may recollect from an Earlier Post how TOF mused upon the collective result of a cycle riding on the back of a trend.

TOF first encountered this notion in a 1947 book (Cycles, by Dewey and Dakin) regarding economic cycles, and noted it himself when he plotted annual US birth rates, in which the cycle rode aback a declining trend. 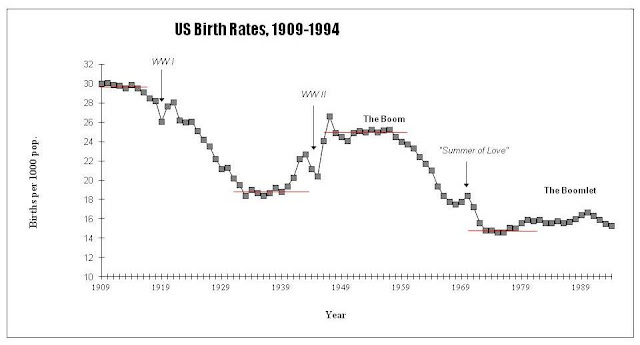 The cycle depends upon annual figures, which began only in the 20th century, but the trend can be traced in decennial census records back to 1820. How the birthrates declined without Pres. Monroe instituting a 2-Child Policy and Government-Funded Birth Control is a Great Mystery to those Late Moderns who believe in the puissance of the Daddy State.

That cycle-atop-trend might apply to "global temperature" was first adumbrated to TOF also around 1990 in a chart of Danish data that overlaid temperature and the solar cycle length (inverse scale). (Solar period averages 11 years, but as they say, "on the average, we're all dead." The cycle actually runs faster and slower.)  Remember this was at the tail end of the Global Cooling rage and before Global Warming had become the established religion. 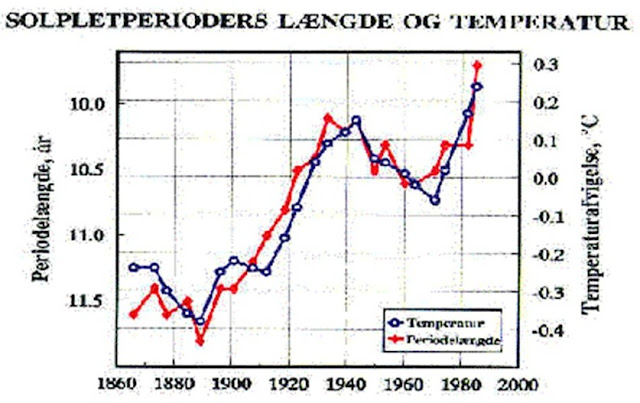 The notion as TOF understands it was that as the sun "beat" faster, it hit solar max more often in a given time span and so the earth would get warmer. As it slowed down, the sun would hit max less often and the earth would cool. At the time, Global Cooling had been all the rage, so TOF was startled to see this beautiful science bludgeoned to death by some ugly facts. Global Cooling was actually that downward "trend" from about 1940 to about 1970. Based on this, TOF prophesied at the time that the new upward trend would run from 1970-2000 and starting about AD 2000, temperatures would once again top off as they had in the 1940s. IOW, TOF predicted the current "pause." Yay! And also the cooling that is about to overtake us (2000-2030), now that the sun has gone out. Boo!

Notice how in the following graph, global warming (longer term) has coincided with a solar Grand Max as reconstructed from Be-10 proxies. From ca. 1900 to 1950, solar activity shifted from normal to high gear, turning up the burner, as it were.

The recent drop in solar activity, starting 2003-2005, is the largest drop since the Napoleonic era, in which it ushered in the Dalton Minimum, the Retreat from Moscow, and all those picturesque Currier and Ives engravings with huge snow mounds and horse-drawn sleighs. It is the second biggest since the Maunder Minimum of the late 1600s, which ushered in the Little Ice Age.

A few years back the multi-decadal oscillations were discovered and their effect on climate noted. Someone -- TOF has forgotten who -- sketched out a Simple Model consisting of two components:
Adding them together, this two-part model rather closely matched the record -- better, in fact, than the complex, multi-component models in current use. Brother Wm. of Ockham, OFM, could not be reached for comment. 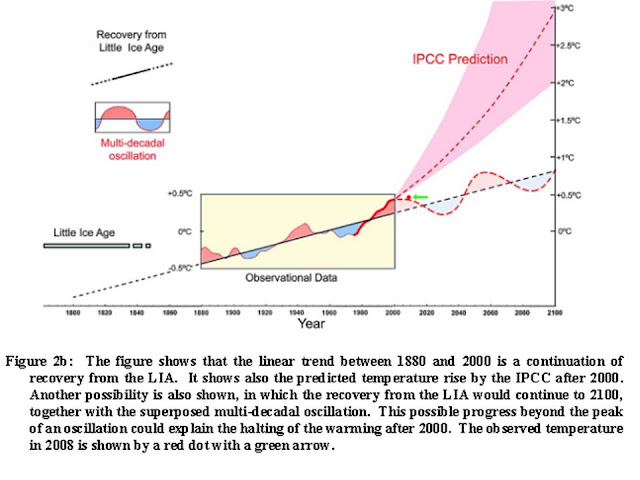 The IPCC trends are based largely on the heavy red line, which hindsight is now showing to be the up-cycle from the bottom of the previous trough to the top of the current one (1970-2000). Global Cooling was based on the trend from the top of the previous wave ca. 1940 to the bottom of the trough ca. 1970. The problem was that the length of the MDO is such that each rise and each fall overlaps the professional careers of the scientists studying them. Evolution seems to have prepared our minds to be overly impressed with recent short-term data. (Which is why the resurgence of Islam took everyone but the late Hillaire Belloc by surprise.)

A chart omitted from the final draft, but provided by Dr. Curry on her blog shows in the actual data what the previous chart hinted at in principle.

The remarkable thing is that this sort of mechanism was described for economic series in a book written in back in 1947, before burning incense to the dead emperors became de rigeur.. The charts in that book showed how a downswing in the cycle would be less remarkable if it happens on an increasing trend than would the subsequent upswing in the cycle.

Someday, when TOF learns why the printerscanner has vanished from the ken of his computer, he will scan some of those charts and show them.
Posted by TheOFloinn at 6:27 PM