Just as everyone has a mother, so too does everyone have a father, despite modern tendencies to dismiss this as socially constructed or whatever. Biology doesn't care about social construction. But there is more to being a father than a biological contribution. That's more, not less. So let's climb the tree paternal and see what fruits dangle therefrom.


A. The Incomparable Marge

1. Claude Lee White was Margie's father. He was an older man when he married her mother. He had been born, as near as can be figured in Fannin, TX in the late 1890s. As a child he moved to Ft. Towson, Choctaw Nation, and later to Quinton, OK. He married Elsie, Margie's mother, in Ft. Smith, Ark. and if one reads between the lines, one guesses at an elopement. He went by the nickname "Blackie" and they eventually wound up in Tulsa OK.

Margie was their only child, and Elsie died when the Marge was very young; and Claude never remarried. So the first father on the list was a single parent. He was utterly devoted to his daughter and while various maternal aunts pitched in to help, he sometimes took her to work with him. As a Teamster, he held several jobs driving cabs and other vehicles. One was driving an armored car. The woman who owned the company gave him permission to take the Marge along on pick-ups, where she rode in the back with the money sacks. Margie grew up, she says, literally rolling in dough. So we take our hats off (properly badged with the union button) and say, "Job well done."

Other fathers on her paternal line are less well known.

2. Jasper Moses White (1878-????) was Claude's father, but he is sprinkled sparsely upon the records, which are sparse in any account. All we know is that he was born in Bohnam, Fannin Co. in 1878 or 79, appears as 1 yr old in the 1880 Census, and married a Choctaw woman named Maggie Jam (a cool name, unless it was Maggie James, which is still kinda kool). There is a Texas marriage record from Fannin for Jasper M. White and a Maggie Taen or Fain (depending on the record).  Blackie named his daughter, the Incomparable Marge, after this Maggie. What happened to Jasper after this is a blank. The Nations were a rough and tumble place -- we're talking Late Cowboy Era -- and few records were kept. Either he moved to Ft. Towson, Choctaw Nation, or he died and his widow moved. He was a party to a suit seeking recognized citizenship in Choctaw Nation.

TOF doffs his coiffure to his own father Pere, who we feted just today at the Hotel Bethlehem buffet. This is an excellent buffet in an elegant setting. TOF and the Marge were there as was Sèan and his wife Dana and her parents; so we had three fathers at the table, counting TOF himself. So we may start the Flynnish count with Son of TOF, who is not a father, but provides the zero-point on the scale: to wit:

0. Dennis Michael Flynn, resident of Anchorage, Alaska, bane of moose and bear. Or moose and squirrel, or however that goes.

0. Sara Margaret Flynn is also Child of TOF and mother of three TOFian grandchildren. She does not live in Alaska, although the youngest grandchildren sometimes emulate moose and bear.

1. Michael Francis Flynn is their father, but the less said of him the better. He was rescued from a life of dissolution and decay by the Incomparable Marge, who cleaned him up and taught him by the use of Garanimals to often match his shirt to his trousers. It's worked out for the past 40-plus years, so maybe they will keep it up.
2. Joseph Francis Flynn, recently turned 90, is the father of TOF. Perhaps we can call him Abu TOF after the Arabic fashion? He has been featured here before, so we will not repeat that. Suffice it to say, he is the best father TOF has ever had and a fit match for the Mut.
3. Francis Thomas Flynn, was the father of Pere and went by the name of Pop-pop. When he was 3 years old, the Wright Brothers flew at Kitty Hawk. As he came of age, radio became commercial. When he was 69 years old, Armstrong and Aldin walked on the moon -- and he could watch it in his living room on a television machine. Will any other generation ever see the degree of qualitative change his did? He married Blanche Jean Cantrel and they had eight children. He became assistant manager of the Hotel Easton, but was denied the top spot in part because he was "too friendly" with the blacks and Italians who were the housekeeping and kitchen staff. How can you run a hotel, he asked afterward, if you aren't friends with the people doing the work? He started a rival hotel, but the Depression was not a good time to do this. The hotel went under, his partner absconded with the cash, and he had to go on the road working as a steelworker and boilermaker in the midwest and upper south, sending money home. He hated not being his own boss, a trait passed down to his descendents, among whom Taking Orders is not numbered as their most sterling trait.
4. Daniel Joseph Flynn was the father of Pop-pop. He had to go to work at age 10 when his father was killed on the railroad. He became a shoemaker, met Matilda (Tillie) Ochenfuss in Newark and moved to Phillipsburg NJ, where he worked as a blacksmith at Warren Foundry and also as a volunteer fireman. His story has been told here.
5. John Thomas Flynn was the father of Daniel, and the only one on this list who was not much of a father. That is because he was killed, as described here, when the children were still young; though if we note that he was killed while trying to provide for his family, he might perhaps be the most committed of them all. He was born in Loughrea, Ireland, emigrated with his brother Patrick, and married Anne Elizabeth Lynch in New Jersey. TOF has no family picture for him and must be content with:
6. Martin Flynn of Loughrea was the father, we suppose, of John Thomas. At this point, record-keeping in Ireland becomes problematical. He married Honora Mahony in Ireland and they seem to have had seven kids, of whom two appear to have perished in the Famine. After Honora's death, he and his youngest son, Martin, joined Patrick and John Thomas in the new world. The only photograph of Martin is this one: 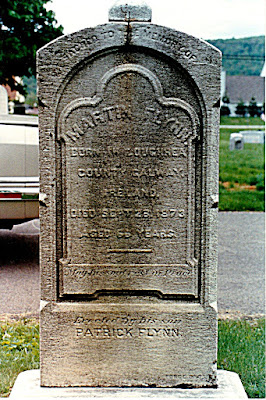