The Tyranny of Genes

PHYSICS, wrote Nigel Calder in Timescape, is the intrusive science, always butting in. Radiocarbon dating overturned a century or more of carefully built-up chronology in Egyptian king lists and other such things, as estimated by comparing strata in excavations. Consequently, it was resisted and denounced as heretical until it became orthodoxy.


It is possible these days to discover to whom you are genetically related and how closely by comparing the genomes found in various peoples. A consequence of this is that longstanding beliefs can be overturned. Two have recently come to TOF's attention, courtesy of Nassim Nicholas Taleb and Pierre Zalloua.

Now, TOF has always considered it unlikely that low density barbarian groups could replace high density civilizations. Barbarian invaders might impose their languages and customs, but not their genes. Hence, the Palestinian Arabs of today would be mainly descended from the same people who lived there before the arabs came huffing and puffing out of the desert: Basically Canaanites (with an admixture of Jews, Greeks, and Romans) who have perforce learned Arabic and pray facing Mecca. Likewise, most Turks today are actually Greeks and Cappadocians, rather than genetically Turkish. The cattle herding nomads never outnumbered the settled and civilized farmers of Anatolia. However, it is quite natural for a defeated people to imitate the ways of their conquerors. So even though France is genetically Celtic, it is linguistically Roman, despite invading Franks and other Germans. (e.g., Sowell, Conquests and Culture)

So genetic maps do not always match closely with linguistic maps. Southern China is an example. When we trace the progress of Indo-Europeans up the Danube Valley into the heart of Basque country, we may be seeing not the progress of a people but the successive adoption of iron implements and farming by aboriginal peoples who remained stubbornly in place.

Hence, the core of Europe was Celtic from Germany to Iberia and the Isles, but with a sizable admixture of Italics in the south and Germanics in the east. Some migrations are sizable and do leave genetic footprints. See Cavalli-Sforza, The Great Human Diasporas, pp. 149 and 153-157.
+++
Taleb and Zalloua take note of two things in particular:

Ancient Greeks were genetically as close to Ancient Levantines as they were to the so called “Aryans”. It just happened that Ancient Greeks spoke an Indo-European language while Ancient Levantines spoke a Semitic one. Ancient Greeks, it turns out, have an Anatolian origin (and Levantines are mostly Anatolian and Iranian). This was shown in recent paper, Lazaridis et al. (2017) who looked at Bronze Age and modern Greeks. And modern Greeks descend mostly from Bronze Age Greeks. In other words, if you want to see how [sic] ancient Greeks looked like, go no further than your local diner in Astoria, Queens.

IOW, you cannot claim a connection to Greece and the heritage of Western Civilization and preach hatred against Jews. Not if you want to be consistent. The dark blue in the above map indicates this Anatolian component, here labelled "Greco-Anatolian."

One is reminded of Colin Renfrew's "Anatolian Hypothesis" that the Indo-European migrations originated in Anatolia and not in the Ukraine. From Sumer-Elam he saw the Dravidian languages spreading east into Indus Valley and south into India; and Semitic languages spreading south into the Levant and then to Egypt and Arabia. Later IE migrations spread into Armenia, Iran, and northern India. 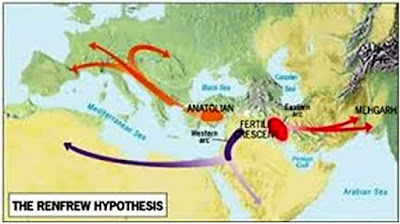 Note: BTW, "aryan" was a social class, not a people. They were the descendants of the chariot lords who rolled out from the steppes into India and Europe; hence, Indo-European. (In Europe, the conquered indigenes were white ancestors to Basques; in India, they were dark ancestors of Dravidians.) In Iran, the word was spelled "aryan." In India, "arya," In Irish, it is "aire" (the y-glide is still there in the pronunciation). Irish recognized several grades of aire. The lowest was bo-aire, or "cow-lord," to qualify for which required that one own one cumal (= 3 cows). So if you don't own at least three cows, you cannot be a noble Aryan. In Greek, άρχων (archon) means a lord. In German, the word is "Ehre," which has shifted to mean "honor," which belonged only to nobles. Two countries still have names that mean "land of the aryans", viz., Erin and Iran.

The paper is more complicated than that. The focus was on comparing Minoans and Mycenaeans against folks from southwest Anatolia, a Neolithic sample, 332 other ancient individuals, and 2,614 present-day humans, including modern Greeks, Cretans, et al. In broad strokes, the study shows that there was genetic continuity in the Aegean from the time of the first farmers to present-day Greece, but not in isolation.


2. Lebanese are Not Arabs

A recent paper showed that modern Lebanese are genetically very close to Ancient Canaanites. Further, in spite of claims in history books (e.g. Salibi), Lebanon experienced hardly any gene flow from the Arabian Peninsula. The presence of J1e haplogroup is less than 3%, a tenth of what is found in Syrians and Jordanians, and a fifth of what is found in Palestinians. This applies to all Lebanese ethnoreligious groups.
Further, the [genetic] distance between today’s Lebanese and modern Greeks is minimal, much closer than that between them and nonLevantine members of the Arab League.

Lebanese nationalist have always claimed that they are Phoenicians, not Arabs, and this would seem to be some evidence for that.

The writers of the paper tell us that they sequenced five sets of remains from the Canaanite city of Sidon, ca. 3700 years old and compared them to modern inhabitants of modern Lebanon. They found that a Bronze Age Canaanite-related ancestry was widespread in the region, shared among urban populations inhabiting the coast (Sidon) and inland populations (Jordan) who likely lived in farming societies or were pastoral nomads. This Canaanite-related ancestry derived from mixture between local Neolithic populations and eastern migrants genetically related to Chalcolithic Iranians. They estimated, using linkage-disequilibrium decay patterns, that this admixture occurred 6,600–3,550 years ago, coinciding with recorded massive population movements in Mesopotamia during the mid-Holocene. They concluded that present-day Lebanese derive most of their ancestry from a Canaanite-related population, which therefore implies substantial genetic continuity in the Levant since at least the Bronze Age. In addition, they found Eurasian ancestry in the modern Lebanese not present in Bronze Age or earlier Levantines, and concluded that this Eurasian ancestry arrived in the Levant around 3,750–2,170 years ago during a period of successive conquests by distant populations.

That would be around 1730 BC to 150 BC, from when the Hyksos chariot lords took Egypt and the Indo-Iranian chariot lords were pouring into Persia and the Indus Valley to when Alexander and his Seleucid successors conquered the area.

The upshot is that Greeks are much closer genetically to Levantines than they are to Nordics, even though the Greeks speak an Indo-European language and not a Semitic one.

Posted by TheOFloinn at 2:52 PM