are in order for the Son of Flynn,(*) who has been inducted into the ΑΦΣ National Criminal Justice Honor Society, ΩΞ Chapter.

To be selected for this honor, each student had to maintain a 3.2 overall cumulative GPA and 3.2 GPA in their Justice major. Alpha Phi Sigma is the only National Criminal Justice Honor Society for Criminal Justice majors. The society recognizes academic excellence of undergraduate and graduate students of criminal justice.

He has been acclimating to Alaska, meaning mainly getting used to darkness and moose.  Here he is hiking in the wilds.  You can see he is almost as tall as the mountains behind him. 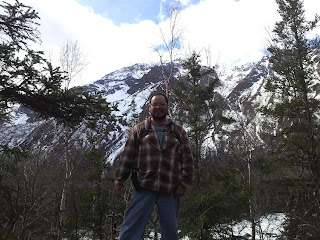