A is for Average


Don't take this entirely too seriously.  I saw the chart at Wm. Briggs, Statistician to the Stars! and followed it back to Gradeinflation.com but I did not dig into the data.

The average grades given for each year by a sample of 79 colleges over the past near-century. Data for the 1930s is sparse, being only about 8 colleges.  So it may also be that not all schools are present in all years, esp. in the early part of the graph.

Now here is a remarkable thing regarding infantile regression.  Take a ruler -- not a king, but a straight-edge -- and place it over the period of the 1940s.  You will notice two things:
That might be.  Prior to the 1960s there was no expectation that everyone should go to college so public and private were probably harvesting a similar crop of applicants.  As the great mass of average students sought college -- and a 2S Draft Status! -- they may have entered the public schools in greater numbers.

If pushed, or nudged with a sharp elbow, TOF might be inclined to say that, in addition to random variation and school-to-school variation (the gray dots!) there are two things happening.
Caution: The grade data will be serially correlated.  Two successive points are NOT independent and identically distributed variables (iidv).  In any two successive years, most of the professors giving the grades, as well as about 75% of the students earning them, will be the same.  Because two major factors in grade assignment (the profs and the students) are at least mostly the same from one year to the next, the outcome (average grades) are also mostly the same.  Faux-trends and -runs appear more often in serially correlated data than in iidv data.


You can see the same sort of perturbation behavior in other data. 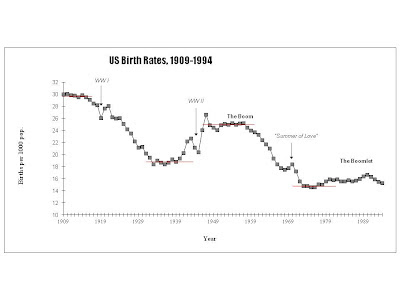 
% Women in the labor force.  The trendline is an exponential growth curve.  The spike representing Rosie the Riveter drops right back to where the curve would have wound up without the spike.