TOF and the military

During TOF's brief tenure in ROTC, he had occasion to attend the annual Caisson Ball. (It was an artillery unit.) His then girl friend, the charming Miss Sharon, gracefully condescended to be his date, resulting in the following picture, which no doubt sent shivers through the Viet Cong ranks at the thought that he might be commissioned a 2nd Lt. of artillery. 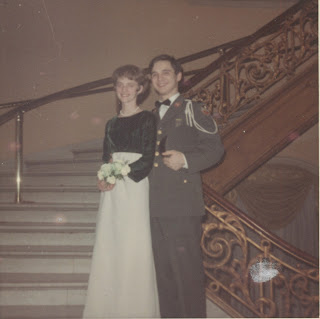 TOF's membership in the band entitled him to wear the fourragère. Cadet ranks were on the epaulets.

Alas, or fortunately depending on POV, TOF was classified 4-F, which meant that in case he was drafted he was to be a hostage. Ho ho. TOF jests. The enemy would not have taken him. In any case, he did not complete ROTC and the Army breathed a collective sigh of relief.

There is a story about the Caisson Ball. TOF will not tell the story