Last Sunday, TOF attended a picnic at the home of his former girlfriend from high school. She had invited a bunch of her neighbors, and her mother, brother, and sister whom TOF knew of old. There were also a pod of classmates as well as food.
Sharon, for such is the girlfriend's name brought forth some old snapshots she had taken back in the day. Some were of the school play and suchlike things. She has now emailed several of these to TOFlandia. 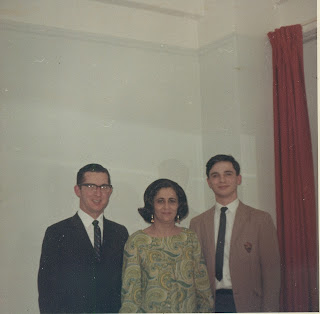 In the first picture, he stands in gawky youthfulness with his parental units, who seem unnaturally young themselves. This was, TOF was assured, the day he went off to college down in Philly town; viz., LaSalle College. This pix was snapped by Sharon.

The second picture was taken in TOF's dorm room by someone in an artistic mood. You can tell because it is black and white and is candle-lit. The TOFling is staring as if hypnotized into the flame. Or perhaps he has fallen asleep. 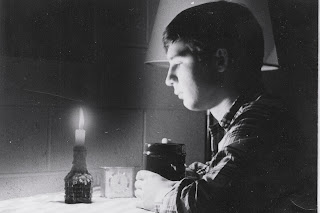 TOF initially registered as a German major, largely because he had not a clue as to what he wanted to do. He was admitted into third-year German because his HS preparation was apparently okay. At one point during the year he was told to write a poem in German and, mirabile dictu! he still remembers the opening lines:

Or something like that, anyway. TOF realizes with a start that he is now himself sieben und sechzig Jahre. Yikes.

In his first semester, he received a D in math. This upset him unduly and so he decided to major in math instead of German. The department chair, Br. Hugh Albright, was bemused. Why? TOF figured most other stuff he could learn on his own, but he would need instruction in math. Well, it made sense at the time. What are you getting in your second semester, he was asked. Calculus I is an A. Well, that's an improvement. And so the major was approved.

What else did TOF study that first year in addition to German Usage and Calculus? He racks his brain. History of Western Civ with John Lukacs and English Lit. Old Testament and New Testament. Military Science (where he learned how to call artillery fire down on your head. Yes,yours. How to read maps, and how R.E.Lee lost the big one). TOF realizes that this is six courses and Late Modern jaws may drop; but such was normal practice back then. There may have been a seventh class, but Physics was likely sophomore year, since it was not likely to have been included in German major curricula.

TOF joined ΚΜΕ which is not as rowdy as it sounds and helped found the Liberal Club. There were probably other extracurriculars in there too somewhere. LaSalle was at the time all-men. For the feminine touch there was Chestnut Hill College, whose mixers we attended, and the variety who attended the dances at LaSalle from various colleges and the town.

TOF had a spiffy uniform for ROTC classes and the rank of cadet staff sergeant, mostly because he played clarinet in the marching band. He also had a marksman medal, which is not as wonderful as it sounds. It meant that he knew which end the bullet came out and could hit the target more often than not. The company was an artillery company (Hence, learning to call down fire on the right map square.) And every year on St. Barbara's Day, the entire company would march down Olney Avenue and Broad Street to St. Barbara's Church for the annual Artillery Mass. (St. Barbara is the patron saint of atillerymen.)

LaSalle had no football team. Basketball was THE sport, and this was they heyday of the Big Five: LaSalle, St. Joseph's, Villanova, Temple, and U. Penn. Each of the Five played the others twice and, however ranked they might have been otherwise, the game could go either way when the city played the city. All Big Five games were played at the Palestra on Penn's campus, usually as a double-header: Penn v. some Ivy League weenies and then two of the Big Five. It was a very noisy venue and the bleachers were close upon each other. The visiting Ivy League team would often be startled when the Big Five students would start their own chanting in the middle of their Ivy game. The most popular chant was to claim that the opponent's mascot was dead. Villanova being the Wildcats, we would chant, "The 'Cat is dead! The 'Cat is dead!" At one game, someone actually threw a dead cat from biology class onto the court.

Those were the days.
Posted by TheOFloinn at 10:12 PM