Click the map to create your own at 270toWin.com

Years ago, Pauline Kael, a TV critic, expressed amazement that R. Nixon had won the election by famously saying, "But no one I know voted for him!" A similar cri du coeur from the bubble was heard a few days ago from the punditry. The polls had all been solidly for Mrs. Clinton. How could this outcome have been possible? Everybody they talked to....

The dirty little secret of polling, as Zogby once called it, is non-response. The polls did not, indeed could not, take into account the preferences of people who refused to answer the questions. Nor could they account for those who lied.

Perceptive Reader will note that the states in blue represent where the Pundits live or play. New York/DC, Chicago, and LA/SF plus their playgrounds in Maui, Taos and Vail. (MN is the stronghold of the Democratic Farmer-Labor Party.) So being immersed, so to speak, in the water of their own milieu, they became through confirmation bias oddly unable to perceive the amphibians around them.

which curiously resembles this map: 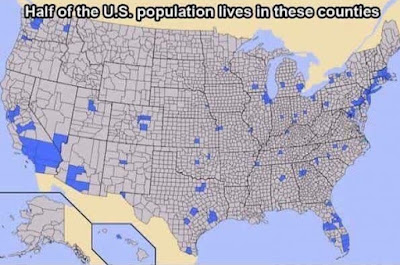 IOW, the most highly populated areas voted blue -- and these were about half the country.

The Economist writes: "American politics appear to be realigning along a cleavage between inward-looking countryfolk and urban globalists." (That is, between the farmers who sell their grain to Russia and the city dwellers who seldom venture far from their apartments?) They call Trump "a uniquely divisive candidate" as if Clinton were not also divisive. But they make a curious remark that reminds us that "only Nixon could go to China." They say that Trump, being himself an urban sophisticate who has aimed his appeal at country and small town people, "he is both perhaps the least likely politician in the country to build bridges across that gap and also the only one who has the capacity to do so."


The reason was not some imaginary swing toward Trump. The people in these states, by and large, are the same people who were living there four years ago when they elected Obama. They did not change suddenly from Enlightened to Deplorable. It was more like a swing away from Clinton. Both candidates were very unpopular, and the turnout this year was the lowest in twenty years. Only 57% of registered voters cast a ballot and in 14 states more did so for "down ballot" races than for president. But while Trump received only 1% more white votes than Romney, Clinton scored significantly less well than Obama among blacks and Hispanics. She swept Philadelphia like a tsunami, but not by as wide a margin as Obama had in the previous two elections. Trump did better among Hispanics than Romney had when all the theory in the world said he should have done zilch. This has already led to dark e-mutterings about the election being "stolen." (This, from people who had grumbled when Trump yanked their chain by being coy about accepting the results of the election.) And the riots and damage to property of innocent bystanders are being wrought by people who were predicting that very behavior from the Deplorables once Hillary had won her famous victory.

Even among women, who were supposed to vote the strong, independent woman who is her Own Person set to Make History by Breaking the Ultimate Glass Ceiling, only 54% of women voting did so. And 42% voted for the Vile Lecher Trump. This is similar to the breakdown in previous elections: 55%-44% (Obama-Romney) 56%-43% (Obama-McCain). That is, Hillary received a smaller share of the women's vote than her predecessor.(Though, knowing how little a few percentage points mean in polling, this is probably a permanent blue-red split, independent of the candidates; and it might could be that women make voting decisions the same as men: based on issues and interests.

Were TOF Emperor of the World, he would issue a decree that no one can babble about mandates or political revolutions when all that has happened is that a few thousand votes have gone one way rather than the other. In a democracy, that's supposed to happen now and then. Governing is not an entitlement. Neither are the interests of a constituency necessarily best served by this policy rather than that policy. The margins in this election (as in others recently) was razor-thin and had a few more people come out to the polls here or there, it could easily have gone another way. Ninety million people did not vote this year, more than enough to swing the election either way.

So before we crow about "winning" this state or "losing" that, stop and ask, "By how much?" The last time I looked at New Hampshire on Election Night, the margin was 19 votes. Margins were correspondingly narrow (relative to population) in Minn., Wisc. Penna., and other states. Sure, in the end each wound up as Blue or Red. That's the purpose of the Electoral College system. But when Obama said eight years ago that because "We Won," he could freeze the Republicans out of the process of reforming the health care system [and thereby come up with the kludge that was implemented piecemeal so that its impact was not felt until just recently and thus cost Clinton the election] he was trying to pretend that his narrow margin of victory meant he had a Mandate. It did not. It meant the American people had hired him to manage the executive branch for the next four years, with an option for renewal.

None of the hysterical imaginings giving people the vapors and driving them to clutch their pearls is going to materialize. It's always a mistake, Heinlein once said, to believe your own propaganda. That's even more foolish than believing your opponent's propaganda. The author of The Art of the Deal knows that you always start your negotiations from your most extreme position and then bargain toward something both sides can live with. There won't be any mass deportations, for example. The American people don't like illegal immigration, but it's the illegal part they don't like. When the process is unregulated bad stuff can happen. Obamacare won't be completely repealed, but those parts of the kludge that were necessary and useful will be kept. (Portability, for example; coverage of college-age children.) Other aspects will need closer inspection. (Coverage of pre-existing conditions is popular, but this is precisely what's driving the prices up, because young, healthy people are smart enough to pay the fine and only buy the policy when they do fall sick. Read Shaw's "The Vice of Gambling and the Virtue of Insurance" for insight on why insurance pools work.) Don't expect the Wall of Trump along the border; but expect that the existing walls will be improved and maintained. Maybe even enforcement of existing laws against employers. But a better and more open process for immigration is possible. Don't expect prohibitive tariffs on US companies importing goods they have manufactured in China or Bangladesh. Bringing manufacturing home is a good idea, but it will make products a great deal more expensive for Americans and almost impossible to sell overseas.