James Chastek has some hard words for news reporting.


-Hard cases make good news.
-News thrives on novelty and therefore on exceptions. To treat news as calling for a law is to fundamentally misunderstand that news-stuff is contrary to law-stuff.
-We'd be closer to justice if we forbade any law to be passed in response to a news story.
-News trains us to only treat the dramatic as serious or worthy of reverence. Our "thoughts and prayers" must be directed at the screaming mother, lone survivor, deluged city, or chaos seen from a helicopter. Systemic problems must be either ignored or find a way to riot on film.
-Is there a grosser hypocrisy than the earnest somberness of the anchorman? I warn you: some of the images you're about to see are disturbing... our thoughts are with the families. Ohc'mon. You live for this! Your thoughts and prayers are for another one just like it next week!
+++
TOF is reminded that in response to earlier cries, we put armed police in the schools. Today we learn that armed police are not an answer.

That Tabs Be Cleared!

1. You Need a Leap of Faith

The Manhattan Contrarian casts a gimlet eye on the New York Times and their reporting on renewable energy using non-renewable wallets. The Times huzzahs the lower costs of renewables generation equipment, but the MC reminds us that installing additional capacity more cheaply actually means more expensive electricity. [see graph, below] Because the wind does not always blow and half the day is night, the best renewables capacity is only 40% available. This instability in renewables generation requires a traditional power back-up capacity at least as great. Speaking of the German Energiewende, he writes:


The total [capacity] for all "renewables" [in Germany] is 83.8 GW -- a figure higher than the peak demand of 83.3 GW.  [This sounds good, b]ut, then there's also the fossil fuel and "conventional" capacity of 108.4 GW.  That's essentially the same amount you would have if you had no wind or solar capacity at all.¹  To put it another way, despite having built what would seem to be enough wind and solar capacity to supply all the electricity needs of the country, they have not been able to get rid of any of their fossil fuel generation capacity.  They need all of it as back-up for when the wind and solar go dead.

Notes:
1. capacity needed. If peak demand is P, then installed capacity should be ≈1.2P to allow for maintenance downtime, emergencies, and the like. That would be somewhere around 100 GW, and Germany has 108.4 GW of conventional generating power.

2. Not an Instruction Manual

"The Greenland ice sheet (GIS) is losing mass at an increasing rate due to surface melt and flow acceleration in outlet glaciers," say the scientists. As the glaciers recede, they reveal early medieval settlements and the stumps of substantial forests; so in one sense, the climate is returning to normal. However, if you have ever tried to brew your tea [or coffee] by blowing on the water with a hair drier, you might wonder if increased air temperature can really account for this. Perhaps the glaciers are being heated from below? Now we learn that, Lo!, just as Iceland has underground volcanic hot springs, so too does Greenland, and these happen to underlie the recessional glaciers. This nicely explains why the melting glaciers are concentrated in specific regions.


4. Scotty, Lock on with the Tractor Beam!

And you thought is was sci-fi? Apparently not. When Bridget ban serves he guest, Ravn Olafsdottr, from a "gravity cart" that floats above the floor, she is no so far ahead of the curve as we might think.


5. For Some Values of "Identical"

Another odd datum on the notion of "race." A pair of identical twins -- that is, genetically identical, from the same egg -- were born in the UK to a mixed-race couple. One twin had white skin while the other twin had black skin.

They are not the first case of twins born with different skins, though the first that are genetically identical. Makes one wonder though how genetically meaningful racial identification is in an objective sense.

TOF's Faithful Reader may recollect passages from On the Razor's Edge describing how the Capital of All the Worlds was reassembling and repairing itself.


Inner Child was constantly alert to alterations in his environment and the Brute was keen to all his senses, and between the two of them they brought the scarred man to a halt by the block upon which they had earlier sat.


And now we have concrete infused with fungi! A new self-healing fungi concrete, co-developed by researchers at Binghamton University, State University of New York, could help repair cracks in aging concrete permanently, and help save America's crumbling infrastructure.

Using 'next generation' DNA sequencing scientists have found that the famous 'Two Brothers' mummies of the Manchester Museum have different fathers so are, in fact, half-brothers. The Two Brothers are the Museum's oldest mummies and amongst the best-known human remains in its Egyptology collection. They are the mummies of two elite men -- Khnum-nakht and Nakht-ankh -- dating to around 1800 BC.

The feathers of this particular dinosaur were so well-preserved that scientists could determine their color from their molecular structure!


9. The Cambrian Explosion was a Tumor?

The sudden appearance and rapid proliferation of animal life known as the Cambrian Explosion, which has been conventionally ascribed to the increase in atmospheric oxygen caused by plants eating the CO2 with which the early atmosphere was composed (similar to present-day Mars and Venus). But the timing is off: high oxygen content is actually detrimental to stem cells and hence cell replacement.

But by studying the ability of tumor cells to imitate the properties of stem cells, a team at Lund Univ. in Sweden, has observed how tumor cells can high-jack specific mechanisms that evade the negative effects that high oxygen has on stem cells. As a consequence, the tumor cells are able to maintain stem cell properties, despite being surrounded by the high oxygen concentrations that are present in the body.

The result was a cancer-like explosive growth in multi-celled animals.

Thought for the day 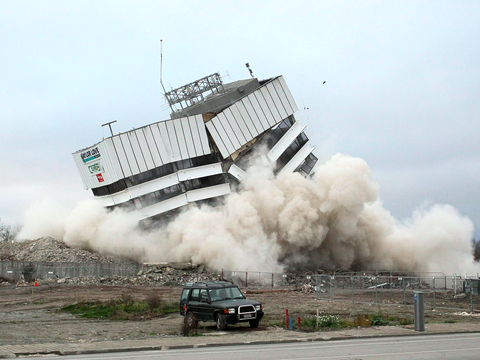 We often hear that the rate of progress is accelerating. Change is coming faster and faster. Things that were once pooh-poohed as "slippery slope fallacies" only a few years ago are now spoken of as inevitable and well-established. We are building something new, we are told.

Yet a building being constructed does not move faster and faster. A building collapsing does, as it accelerated under the force of gravity.
Posted by TheOFloinn at 4:24 PM 21 comments: