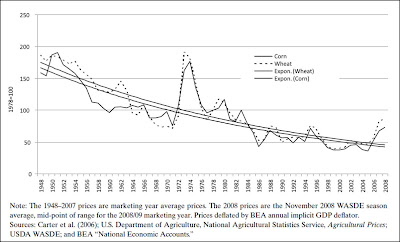 As Roger Pielke Jr. points out, grain price indices show long-term declines.  The bump at the end is as likely to be caused by the Americans turning grain into fuel or by China and India buying more petroleum (thus raising the costs of farming with tractors) as by Global Warming™.  After all, Global Warming™ is supposed to be taking place all throughout the time frame plotted.

I propose changing the name of the product from Climate Disruption, which is too obviously a marketing gimmick, to The Omnitheory.

Pielke, btw, is an interesting bird.  He believes that AGW is happening, but also that some colleagues have been overblowing it and seeing evidences where there is none.
Posted by TheOFloinn at 4:40 PM