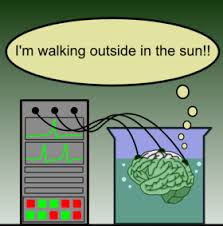 At RENOvation, the World Science Fiction Convention held in Reno NV this past week, there was a panel with the title "What is Consciousness?"  The panel did yeoman's work without (as is customary at con panels) ever coming to a conclusion, let alone a consensus conclusion.  I was in the audience and did not participate, but a few points struck me afterwards.

There were several initial attempts to define consciousness, though no one tried to define consciousness by negation in the obvious sense; viz., "whatever it is you have when you are not unconscious."  They seemed to get all mixed up with "sentience," "intelligence," "empathy," and so forth.  All these terms were used interchangeably by panelists.

One of the participants proudly declared himself a materialist, but never specified of what material "consciousness" is made.  My theory is that it is made of the same 'material' as momentum, gravity, or reproductive fitness; viz., none.  Physics has been edging away from materialism for the past hundred years.  Quantum mechanics dealt it a deadly blow, leading Heisenberg to remark that "It has become clear that the desired objective reality of the elementary particle is too crude an oversimplification of what really happens."  IOW, materialism no longer accounts even for matter.  The preferred term is "physicalist." 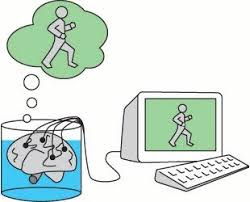 It soon became clear that what most of the panelists meant by "consciousness" was not consciousness, but "mind."  This sort of terminological imprecision is typical of such panels, which are often discussed "on the fly" and with no expectation of rigor.  The usual "mind is the software and the brain is the hardware" model was trotted out, but not questioned.

This is a very attractive model because we are in love with computers.  When high-tech meant hydraulics -- think of the aquaducts of Rome, the water clocks, and so on -- the mind was conceived in hydraulic terms, and we got the theory of humors.  Later, when 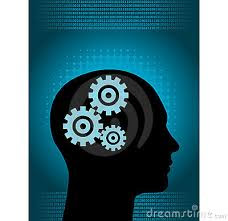 mechanical contraptions were all the rage, the mind was conceived as a mechanical contrivance full of gears and springs and such.  A keen thinker was said to have a clockwork mind.  Such poetic metaphors can be useful, but they ought not to be confused with scientific facts.  The mind is no more a computer than it is a machine than it is a hydraulic system.  Let us not confuse the object with the spotlight, even if the spotlight coming from a new angle throws the thing into sharp relief.

No one on the panel mentioned any objections to the mechanistic theory of mind, such as those raised by Gödel, Lucas, or Penrose, or those raised by Searle, Putnam, and others.  In all likelihood, they were unaware of them.  The software-hardware metaphor is just too dang attractive to SF folks, so it is accepted without question.

Free Will, but not Cheap.  I even heard one panelist -- the materialist, of course -- refer to "the illusion of a self" with no evident irony.  (What exactly is it that is experiencing the illusion?)  But then, all materialism eventually decays into eliminativist materialism.

Then there was the saw about the brain making a decision before the test subject was aware of making it.  Libet's experiment was brought up with touching faith, but with no skepticism.  Materialists are often not material enough: all that they can affirm is that some part of the brain warmed up in preparation for a task which the subject knew well beforehand that he would be making.  But what justifies equating the fact of "blood-flow to brain region X" detected by an fMRI with the interpretation "Aha! That was the moment of decision!"  But under such conditions, why wouldn't the body show some preparatory activity?

So What is this "Consciousness" Thingie? 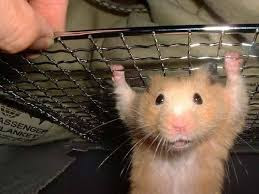 Anima (or ενεργια) is simply whatever a living being has that a dead one does not.  "Does a petunia have a soul (or animating principle)" becomes then "is a petunia alive."  This can be verified empirically.

Of the three levels of psyches -- vegetative, sensitive, and rational -- it is clear that the vegetative is not conscious.  No one ever supposed that a petunia pondered.  But those animals with sensitive psyches, that is, which follow a stimulus-sensation-response loop, some degree of consciousness exists.  A cockroach may not be conscious, but surely a cat is.  A cockroach "knows" certain things -- head for food, stay close to walls, etc. -- but a cat knows that it knows.  I think.  Chastek says that "our debates about 'consciousness' are debates about something we have in common with hamsters."

But this is not too exciting.  It is a "basal stage of consciousness" in which a cascade of meaningless particles -- photons, scent molecules, compression waves, or even heat or sonar pulses, depending on what species you are -- crash against the sensory organs like the waves of the gray North Sea against the rocky shores of the Hebrides.  But there is a higher stage than this indifference, or passive reception of sensation; and that is awareness.  We can not only see; we can look.

When I am looking out the window and see a squirrel race by, and when this catches my awareness, I don’t first see “the squirrel is running”. This is too distinct. Rather, I have a nameless and inarticulate- though very vivid and clear- experience that could be understood in one of a thousand ways. If I have just spent the last three weeks trying to keep squirrels out of my yard, or if I am a pagan priest who sees squirrels as a sign of great fortune, or if I am a grad student paid to stare out a window and count how many squirrels go by, the experience will be in one sense the same, in another sense different.

Chastek, "Stages of consciousness"
I once noted thusly in an afterword to a story about aliens:

I look out the front window of my childhood home and I would see...a tree.

In other words, we humans know things first at some level between the very specific (“I see the bark of the trunk of the sycamore tree”) and the very general (“I see a plant”). We perceive the individual, not its parts and not the whole of which it is a member.
Now, I have an alien here with me. (Trust me on this.) I point out the window. “What do you see?” “An ecosphere,” he/she/it replies. Such an alien, knowing the set before knowing the individual, would have to understand things in a different way than we do.
Flynn, The Forest of Time, afterward to "The Common Goal of Nature" 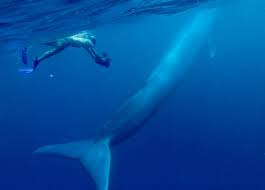 Now the manner in which we privilege the photons reflecting off the squirrel (or the sycamore) over all the other photons striking our retinas cannot possibly lie in the photons themselves, which are indifferent to such matters as what they bounced off of.  Nor is it likely to lie in the neurons of the brain, which simply respond to the photons.  Rather, in mind (as opposed to mere indifferent consciousness or even awareness) there is intention.  We not only see the squirrel; we look at it.  And the different modes of looking as suggested by Chastek, indicate that the intention does not reside in the cascade of particles, because the sensation of seeing the squirrel cross our vision is the same regardless of our intention in taking note of it.

We could compare the way we harvest these photons rather than those to the way a baleen whale seines the ocean for krill.  Animals -- at least the higher sort -- exhibit intention.  They do not respond to stimuli; they seek out the stimuli they want.  The lioness does not passively react to the scent of the gazelle; she seeks out the scent or sight of the gazelle.

So What is this "Mind" Thingie?

Beyond the petunia, and beyond indifferent consciousness and beyond even awareness, lies mind.  The con panel kept oscillating between consciousness and mind without pausing to make any distinctrion.  The Aristotelian-Thomist model of the rational psyche is shown below.  You've seen it here before, so we need not dwell on it; but this is what most of the panel meant most of the time.

Oddly, a couple panelists brought up Aristotelian or Thomistic points, evidently without realizing that they were doing so.  More oddly still, one of them was the materialist!  Apparently, materialism may lead to a certain unconscious incoherency in one's world-view.  Of course, what was mentioned was the inseparability of mind and brain.  Now, it would be more correct to say the inseparability of mind and body, as it is well-known that other parts of the body are involved in "cognition."  The senses, the motor neurons, the glands, and so on.  This simply boils down to Aristotelian hylemorphism, the oneness of the individual.  And the reason, for those who wonder, why the Creed looks forward to the Resurrection of the Body for the psyche to be reunited with.

In any case, we could define "mind" as in some sense the Intellect-Volition track of the rational psyche diagramed above.  We can advance arguments that this is an immaterial portion of the psyche and is subsistent.  Unlike sights, sounds, motions, and the like, the objects of the intellect and volition are themselved immaterial: Given that its objects are immaterial, there is no reason for the rational faculties to be material and hence no reason for the rational part of the psyche to perish when the material body perishes.  Everyone, including Aquinas, is a physicalist as regards the psyches of plants and other animals and (when they are carefully precise) the non-rational parts of the human psyche.

Those surprised that thoughts make footprints in the brain oft insist that the footprints are the thoughts, even though this destroys the basis for objectivity.  Of course, thought is accompanied by neural patterns; but if thoughts are only neural patterns, then the Other is known only as a modification of my self and not as something other than myself.  Objectivity is to know the other precisely as other.

And why is it that people worry over the "mind-body problem" created by poor old Rene Descartes, but no one is concerned about the "sphere-rubber problem" when it comes to basketballs?  Let alone the "conservation of momentum-body" problem.  For an hysterical parody of the mind-body interaction problem, see here:
Interaction Problems.

So What About the Squirrel?
All this being so, why is there no universal agreement?  Well, there is no universal agreement on even so empirical a thing as quantum theory -- on another panel, Greg Benford mentioned that there were five major theories -- so why should there be agreement on anything else?  The facts are the same for everyone, but the meaning of the facts may differ, as did the meaning of the squirrel in Chastek's example.  Similarly, the facts about the mind, insofar as we know them, carry different meanings to different observers.
Posted by TheOFloinn at 2:23 AM