Were I he, I should be wary of falling asleep and thereby not counting.
+ + +


On another site, a comm box warrior affects confusion regarding the distinction between cheek swabs and human beings: the alphanumerical elric1v says:


By the definition presented, my cheek scrapings are an organism which should be awarded [sic] all of the rights of a human being.

The intellectual barrera behind which he prepares to duck is likely the precise way in which a prior post or comment was worded. ("By the definition presented,...") But if clarity had been his concern he would simply have added the helpful distinction of tissue from organism, and not coyly posed it as if it were an obstacle to "awarding" human rights to an actual organism.

Of course, cheek scrapings -- they used to say "elbows" or "fingernail clippings" to muddy up the tissue/organ/organism distinction -- are not in fact organisms, the which fact had once been known to any graduate of HS biology.  That is, cheek scrapings do not contain within themselves the principle of their own growth and development.  Left to their own devices, supplied only with the usual nutrients, cheek scrapings will not mature into a wise old woman with grandchildren or whatever else to which mr. elric1v may "award" the distinction of human rights. 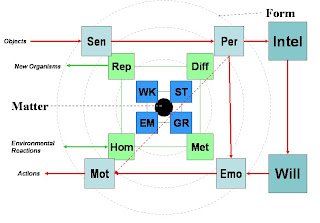 A human organism in terms of powers.  The minimum for life is a unifying principle consisting of homeostasis (Hom), metabolism (Met), differentiation/growth & development (Diff), and reproduction (Rep).  Afer W. Wallace, The Modeling of Nature.  Note that not all powers actualize at the same time.  A three-year old (e.g.) is not yet capable of rational thought, nor of reproduction.

Posted by TheOFloinn at 7:35 PM