That which is most perfected in aerodynamics, the maximum from which all aerodynamic designs take their being, is the Drag Equation, that than which nothing greater can be thought insofar as aerodynamics is concerned.  This equation, under certain realistic assumptions, equates the drag force, FD, with

ρ, the mass density of the fluid through which the object moves
A, the reference area
CD, the drag coefficient

v, the velocity of the object relative to the fluid 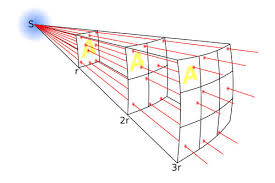 There is a certain beauty to this equation, TOF says redundantly.  Consider the equation for light intensity:

c, the speed of light in vacuum
n, the refractive index
ε_o, the vacuum permittivity
E, the complex amplitude of the electric field


A little thought reveals that the form of both equations is identical: one-half a constant times the square of a variable.  If we regard the three constants as one constant -- ρCDA = α, let's say -- the form reduces to ½αv², which is very like the formulae for


And since the ½ is also a constant, it can be folded into the others, so...
For those in search of beauty, we also note that Newton's Law of Universal Gravitation bears an uncanny resemblance to Reilly's Law of Retail Attractiveness.  That is, if F is the attractiveness of a town at a certain distance from it (d), and P is the population of the town, then at a first approximation:

which ought to look familiar.  If it doesn't, you should have paid more attention in your physics class.  (And if you did not have a physics class, what the heck?)  This generalizes to the amount of traffic, (commerce, interactions) between two towns of population P1 and P2, resp.:

This describes such things as the geographical patterns of towns on a landscape or of retail establishments within a town, the placement of boundaries between polities, etc.  Although an interesting side-comment in mathematical geography is that the exponent ² might vary depending on whether costs or effort of travel vary over distance.  This can be amended by changing d from simple geometric distance to a metric of travel effort or energy expended.

So beneath the complexity apparent to our senses, there is an underlying order and simplicity.  Yet why should the drag of an object through a fluid in any way resemble the intensity of light in a vacuum?  You would almost think the whole thing was designed.  Someone should give that a bit of thought.  Oh, wait (cf. fifth way).

But what entrances the Modern is not the beauty of the physical relationships or how there is an underlying unity to everything.  Modern science, per Francis Bacon, Rene Descartes, and their pals, is meant to give Man dominion over [female] Nature, and so our interest shifted from final causes to a subset of efficient causes: id. est, to the metric and controllable facets of the universe.  So much so that we convinced ourselves that the metric and controllable facets were the only facets that existed.


The tremendous success of the methods of natural science at bringing home the bacon, as Bacon demanded -- new products, wonder drugs, the internet, nerve gasses, and the like -- leads many to suppose it is the only admissible method and it is only a matter of time before everything -- psychology, art, history, consciousness, etc. -- succumb to its power.  This is a bit like supposing that the tremendous success of the methods of chemistry means it will someday discover how to convert lead into gold.   But chemistry deals with valence electrons, not with nuclei.  If we one day learn to transmute lead into gold, we will need the different tools of a different science.

Which by roundabout means leads us to two thoughts for the day.  The first is by James T. Reese, retired Assistant Unit Chief of the Behavioral Science Unit, FBI Academy, (one of the inspirations for the TV show Criminal Minds).  In an interview with Trauma Response magazine, he said:


There are certain clues at a crime scene, which, by their very nature, do not lend themselves to being collected or examined. How does one collect love, rage, hatred, fear, jealousy, irrationality, or other intangibles? Clues left at a crime scene may be of inestimable value in leading to the solution of a crime; however, they are not necessarily items of physical evidence, per se.

So the existence of non-physical realities is accepted pragmatically in criminology.  Love, rage, hatred, or fear are tough to measure.  The methods of the natural sciences do not apply.  Yet they are no less a real feature of the world.


The second thought is that a consequence of Baconian, goal-oriented science is that the goal can eat up the science.  When science was reoriented to the service of engineering and industry, it guaranteed that eventually there would be steady pressure on research in the direction of pre-determined goals.  Call it The Revenge of the Final Causes.  The [extra-scientific] goal becomes so important that the research must be cut and fit to support it, and any science (or scientist) that does not fit gets screened out by "peer review."


Interestingly, peer review was a medieval method developed in theology to ensure orthodoxy in the writings of theologians. (It was because he did not accept the alterations suggested by the peer reviewers that William of Ockham never received his doctorate.)  It is now considered "scientific" but its methods and purposes remain the same.

There is a gradient to the scientific method.  It was born in and is best suited to the physics of local motion, and works marvelously well in the realm of the inanimate, i.e., in the rest of physics and in chemistry.  That's like 99.9% of the universe.  It functions adequately in biology -- esp. in its biophysics and biochemistry -- but less well when the biota have anything to say about it.  Animals, after all, violate the Law of Inertia every time a cat goes looking for drapes to shred.  When it gets to the realm of psychology and the so-called social "sciences", it breaks down.  Since the scientific method explicitly excludes everything subjective, it has a hard time dealing with subjective phenomena.  Mathematics gives way to statistics; causes are replaced with correlations.

By the nature of their subject matters, the social "sciences" -- anthropologists, sociologists, political scientists, etc. -- are even more susceptible to the problem of goal-orientation, as the late Daniel Patrick Moynihan took note years ago:


"Social science is rarely dispassionate, and social scientists are frequently caught up in the politics which their work necessarily involves."

And from this: the "backdraft" problem, when political commitments infect even the inanimate sciences.  One need only recall how so many scientists a century ago earnestly hammered Darwin's science into the Procrustean bed of eugenics.  As the Modern Ages crumble, we will see more and more of this.


The Wonderful World of Skiffy

Now what does all this say about Science Fiction?

For one thing, Golden Age science fiction was never about science; it was about technology.  It was always focused more on the Gadget or the Product or the Consequences of Science.  It was Man's mastery over the Universe.  Our Conquest of Space.  The First and Last Men. It was Baconian to the core.  In the 1660s Robert Boyle listed the most pressing problems for scientists to tackle:
And you will notice that all of them are products or goals, even #8, which comes closest to pure science.  In fact, most of them are pure technology/engineering, and form a fair list of Golden Age science fiction stories.

Coupled with this technophilia, science fiction portrayed science as a missionary activity.  The scientist, remorseless and logical, objective and unswayed by mere emotion, was superior to those led by their subjective feelings and was supposed to uplift humanity.  This is a 'tude still found among transhumanists and internet atheists, who often imagine that real, flesh-and-blood scientists are like these stereotypes.  But look at Boyle's list more carefully and you'll find plenty of feelings on the part of a guy in his 40s as he dreams of dentures and Hair Club for Men (#2) or even Viagra (#4, lol).


Oddly enough, in the visual medium, the opposite trope - the mad scientist - seemed more popular.  This may reflect a difference between the logos and the ikon.  In TV and the movies, Bones usually gets the better of Spock, and Luke must shut down his computer and get in touch with his feelings.

All of this meant that characterization received short shrift in the Old Days.  But SF has more recently reflected a greater awareness of humanism and stories about techy marvels appear less often.  More attention is being paid to characterization.

And no wonder.  Science is a means, not an end.  The choice of goals to pursue will seldom be "a logical deduction from scientific theory," as eugenics and racial hygiene were once said to be.  So what a scientist chooses to do may matter just as much as how he does it.

Kant said you can't derive an Ought from an Is.  (At least, you can't if you abandon Aristotle.)  Though that hasn't stopped folks from Condorcet to Dennet from trying to devise a "scientific" theory of morality or professional skeptic Michael Schermer from spinning a Darwinian "explanation" for the mutiny on HMS Bounty.  So the motives and the purposes of the characters become more and more of a factor in the writing as we move from Modern science to Postmodern science.

If the medieval scientist was something of an art critic and the modern scientist something of an engineer, the post-modern scientist will be something of a salesman, advocating for particular programs and policies and sincerely marshaling through confirmation bias just those facts that will advance it.  Think of it like expert testimony in a court of law.  (I once saw two reliability engineers in a re-enactment testify to opposite conclusions regarding the reliability of a product, starting from the same data.)

It is in light of this devolution of Modern science due to its internal contradictions that we can better understand certain criticisms lately leveled against Thomas Nagel's book on the Mind; viz., that the cogency of his arguments was less important than that they gave aid and comfort to the "enemy," creationists.  This is not especially a scientific attitude as Descartes or Newton might have known it; but it is one that Darwin would have noticed and some today have been known to practice.
Posted by TheOFloinn at 4:39 PM