TOF is taking a break from his Achilles-like tortoise-chasing to finish "In Panic Town, on the Backward Moon" and amused himself by finding the covers of all the Analog issues that featured his story. In recent years, the mags have all found it cheaper to use generic covers rather than commission special covers for specific stories; but in Olden Tymes, this was not so. So here they are:

Oct. 1987. TOF's first cover was for part-1 of In the Country of the Blind, a 2-part serial that led to his first Novel. The cover it got was "high concept." The story is set in the Babbage Society milieu and is loosely connected to the Firestar series.

June 1989. This was another 2-parter, for part-1 of The Washer at the Ford. The story was part of The Nanotech Chronicles and gives us a look at Charlie Singer of Singerlabs. Stan Schmidt actually apologized for the cover; but I thought that if it were only a bit more wooden and stylized it might have worked.

April 1990. This was my first and only Kelly Freas cover, for the Hraani story, "The Common Goal of Nature." It appeared in a stolen German translation in Partners fuer Lebens. (A German agent had fallen into gambling debts and had started selling stories for his clients without either informing them or passing on the monies. It was collected in The Forest of Time and Other Stories.

Jan 1994. The cover for "Melodies of the Heart," which was a Hugo nominee. I can only imagine what readers thought they were getting when they saw this one. There is a bit of high concept here, too. "Melodies..." shows up in both The Forest of Time and Captive Dreams.

Oct. 2009. After a long absence, TOF returns to the cover with "Where the Winds are All Asleep," one of the Irish Pub stories. The secret to cover-tude is to have weird-looking aliens or space-ships. Somehow or other, the text is on the intertubes, although the Greek text is garbled, and the sections in the Pub are not adequately indicated. 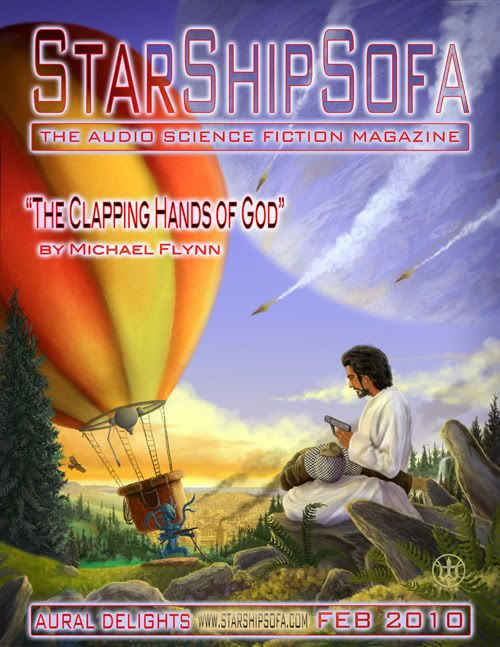 Feb 2010. This is a cover for a podcast called StarShip Sofa, an audio of "The Clapping Hands of God," appearing earlier in Analog. It's not a bad cover, and the story made it onto the Hugo ballot.