A Blast from the Past, continued

Putting on My Top Hat

I warned you. Nostalgia is a terrible force. Could we but harness it, our energy problems would be solved. Ah, the good old days...

Topology is a branch of mathematics concerned with whether or not two points are close together, and how this closeness is affected by mappings from one space to another. On what basis can we say that two point a and b are "close"?

Now it's nice to know that the family of all open sets consists of open sets. What topology does is build this up from beneath. IOW, we start with no preconception of what constitutes an "open" set and a set of rules for what a topology is. Basically, a topology is a family of sets that is closed under union (each union of members of the family is a member of the family) and closed under finite intersection (each finite intersection etc.) And, oh yeah, Ø and X are members, too.  It turns out (fortunately) that open sets are open sets under these rules. Phew.

A set can have more than one topology. The coarsest (smallest) topology is just that consisting of {Ø,X}, that is: the null set and the space itself. In such a topology, there are no small neighborhoods. If you want to say where a point is, it's in X. Sorry, can't pin it down any closer. This is called the indiscrete topology. The finest (largest) topology is P(X), the Power Set, which consists of the set of all subsets of X. This is the discrete topology.

That's enough of that.

A function is a continuous map from one topological space to another. Notation is f:Y→Z. For example, the square maps E^1 into E^1 (actually into the non-negative part of E^1) by mapping 0 to 0, 1 to 1, 2 to 4 and so on and in between

. This is illustrated below for a few points in Y. 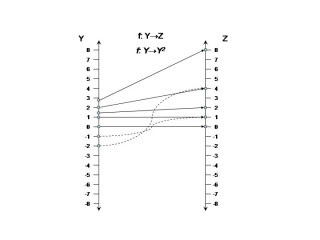 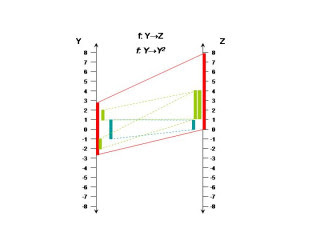 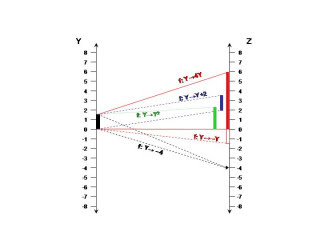 It is natural to ask: what sort of topological space can we make of the set of all continuous functions from Y->Z.
In what sense can we say two functions f and g are "near" each other?
Who cares?

Tune in again next time for the next exciting installment in this mesmerizing topic.

No third installment was posted. It began to seem all too esoteric a topic of an internet post.
Posted by TheOFloinn at 1:53 PM