This series, some of which date from 2012, and were excavated by paleogeologists from the shale formations of Kittatinny Ridge, have been modestly revised and arranged into the following order:

Some of these are based on short presentations made to the Writers Cafe of the Greater Lehigh Valley Writers Group, known as GLVWG, which is pronounced just as it’s spelled [and is probably a town in Wales]. Some are newly written. Materials in the various essays are cited from

as well as others cited in passing. In addition, personal correspondence with several writers has been helpful, including with:

Anatomy of a Story

This can be represented as a hypercube, of which a 3-cube projection ia shown below. The Theme dimension has been omitted. A story can be located anywhere within the cube. 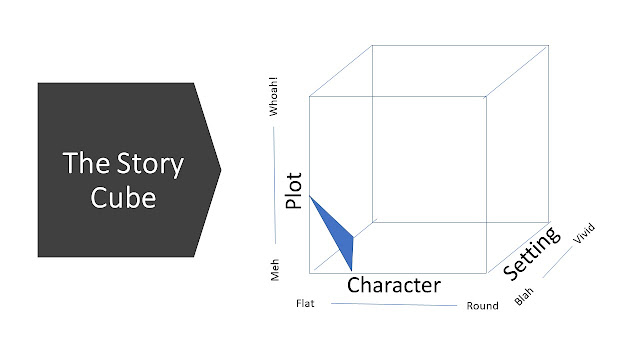 These dimensions are independent of one another. You can have an exciting plot featuring cardboard characters or vivid characters in a ho-hum plot. Nancy Kress once said of a national best-seller that the characters had all the depth of wallpaper -- but she could not stop turning the pages. The best fiction hits on all scales: rounded characters in an intriguing plot in a vivid setting. If in addition the fiction has a captivating Theme/Idea, you hit the quadrafecta.

When TOF showed the Story Cube to Nancy Kress many years ago, she suggested Wordsmithing as a fifth dimension. It is certainly an excellence or perfection of a story, and inseparable from it. You cannot tell a story but in words.* But it is of a different order than the four just mentioned.

(*Yeah, graphic "novels", comic books, movies, et al. in our wonderful new world of visual rather than logical entertainment. But even these oft need scripts or story boards.)

The arrangement of the words is the Form, as in Aristotelian hylemorphism, while the content of the story is the Matter (let's call it the "subject matter"). Matter (hyle) is pure potential; Form (morphe) makes it real. Imagine Don Quixote written in the Form of a travelogue or as by Ernest Hemingway. It would not be the same book!

There is no answer to boredom.  -- Katherine Fullerton Gerould

No one will read your story if he/she is bored.  So one of the first problems of a fiction writer is to make the story interesting.  It must be interesting to the writer (else he will not complete it) and it must be interesting to the reader (else he will not complete it).  Since reader interests vary widely, and in particular may differ from your own, this may seem a shot in the dark, a pig in the poke, a bird in the bush, a vote for…  You get the picture.  But while there is no royal road to story-writing, there may some commoner footpaths.
In his book Twenty Problems of the Fiction Writer, John Gallishaw set out his "Laws of Interest" and where in the story they are usually applied. 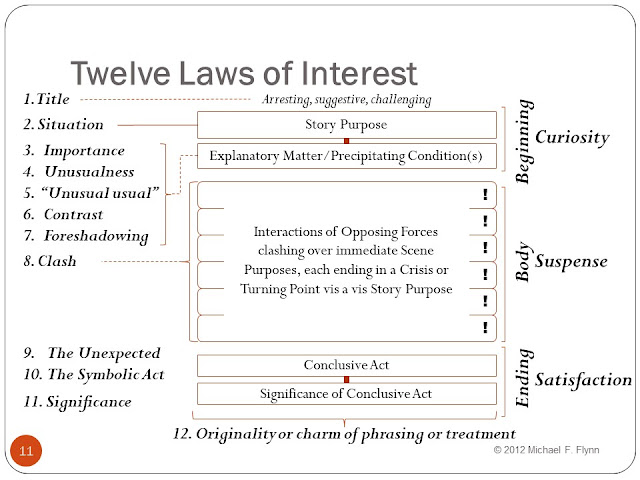 Plot, characterization, worldbuilding... are structural skills and like perspective, stress, strength of materials, they may be taught. Though that doesn't make you an architect. Originality [#12] cannot be taught. Hemingway, when asked what the hardest part of writing was, answered, "Getting the words right." There are authors who are read for their originality of style. In SF, R.A.Lafferty is one. (cf. Arrive at Easterwine, Okla Hannali, The Fall of Rome, "Land of the Great Horses," "Nine Hundred Grandmothers," and so on.) These are a wonder to read. Consider the following excerpt:

When you have shot and killed a man you have in some measure clarified your attitude toward him. You have given a definite answer to a definite problem. For better or worse you have acted decisively. In a way, the next move is up to him.
-- "Golden Gate," Golden Gate and Other Stories (1982)

In the posts that follow, we will look at the "time dimension" of the story: Ideas, Titles, Beginnings, Middles and Ends. Then at two of the "spatial" dimensions: Plotting and Characterization.
TOF will try to post one of these every week on Sunday. Since that is the designated Day of Rest, it won't matter if they put you to sleep.

Coming Soon: It Came from Schenectady!
Posted by TheOFloinn at 3:24 PM