The Wright Stuff
Today, 106 years ago, a couple of bicycle mechanics from Ohio took their motorized kite to North Carolina to test their new "wing warping" idea. It worked pretty well. Thanks, guys! 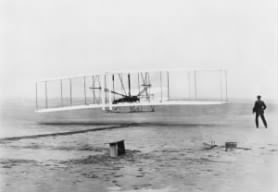 My grandfather was almost 4 when that happened. Before he died, he watched men walk on the moon. From his living room.

I never has a birthday of my own until late in high school. The reason for this is simple. My brother Dennis was born on this day, a full 362 days after I was born. He was already there when I had my first birthday. The way I heard the story, my mother was ironing. By government definitions today, we were "homeless," but back then, we were just "living with my mother's parents." My father was trying to build a house on his GI Bill benefits. (It would eventually culminate in a bureaucrat demanding to know how many rings were in the shower curtain and my father answering how the heck would he know as he hadn't started building yet. It took an intervention by the VFW and the then-senior US Congressman to get things moving. The Iron Law of Bureaucracy, indeed.)

So my mother was ironing and she turns to her mother and says, "That's funny. I feel like I did just before Michael was born." Her mother - whom we called Big Mom, a direct translation of Grossmut[ter] - says, "Ach!" And all were bundled into the car and driven to the hospital. This was a private hospital run by a doctor named Betts; and therefore called [but you guessed it] Betts' Hospital. My dad drove to the emergency exit, dropped off my mother and grandmother, went to find a parking place, parked, walked back to the entrance, and was met by a nurse who said, "Congratulations, it's a boy."

That was the last thing he ever did that was so easy.

My father was at the time an indefatigable maker of 8mm movies. He belonged to a movie-making club that had chipped together to buy a camera. In those days, people did that sort of thing on their own. They made movies.  There is a scene of my brother and I, and our mother, standing on the platform of the old New Jersey Central RR Station. It seems to be about this time of year, for we are wearing heavy autumn coats. Dennis is atop a baggage handler's handcart. My father, the cameraman-director evidently gives direction. Pretend a train is coming down the track toward the station. My mother shades her eyes. I point dramatically past the camera. And Dennis goes into an antic dance atop the cart, waving both arms. This is all you need to know to know about our partnership. I was the straight man. He was Jerry Lewis.

Those were the days of the open range.  Children were free-range. We ran free all over the South Side until coralledn at night. In later years, we would hike up over the mountain and down to the canal on the far side. We built fires and cooked weenies. There were seven of us formed a club, called the Adventure Club, dedicated to exploring, making maps, getting muddy, conducting chemical experiments, and shooting off baking soda rockets and working on the real thing. This was before the fondest dream of every American child was to be a singer or dancer or to wear clothing professionally. But I digress. Free-range as we were, when my mother called one of us into the house for some admonition, she would stand on the back stoop and holler down the List, starting with the oldest. (We always knew who was in trouble by the maternal yodels wafting on the autumn air.) I was always relieved when she did not stop on my name, but continued on to my brothers. She stopped on Dennis' name fairly often.

We wrote science fiction stories. This started because my father used to tell bedtime stories - about aliens who came "to serve man" or about Martians who seemed to be dear dead relatives. He had picked it up from an uncle of his, who used to tell him stories about "Gordo of the Moon," which he liberally illustrated with drawings. (There is an artistic streak that runs through the family.)

So Dennis and I began writing SF stories in spiral notebooks, in pencil, illustrated with Magic Marker. This was when Magic Markers could get you high. Let's hear it for VOCs!   We wrote a story for each planet of the solar system, with some continuing characters.  A crewman on one expedition might become the captain on another.  Most characters died gruesome deaths.  Who knows what our modern pedagogues would do about this? Send us to mandatory counseling, probably, to expunge the least trace of original thought. Dennis would have gotten Ritalined, for sure. Back then it was called "being a little boy" rather than a psychiatric condition.

As we got older, we wrote more sophisticated stories, including a "rebooting" of "To Serve Man." Hah. We didn't know at the time. We thought our father had made those stories up. Two of our friends joined us in a massive shared universe called "Ad Astra" that eventually traveled to other stars and into the far future. The local paper interviewed us: The Space-Writing Flynn boys.  My mother saved the stories.

In any event, every year on 17 December, my brother would make a big deal about how he was now the same age as me. And three days later, I would crow that I was now ahead of him again. It was never clear to us that our birthdays really were separate, since they were always celebrated together. Christmas seemed part of that, too, somehow, although we knew it wasn't our birthday. We always got two of everything. Whatever I got, he got one, too. There are pictures of us in twin Superman suits. Pictures of us wearing identical space helmets - the really-truly kind: big clear plastic globes, with boing-boing antennae and inflated collar pad, albeit with an opening in front of the face. The latter would have been problematical in a really-truly vacuum. (I should pause here and remark that, at the time, no one had ever walked on the moon, and we would be 8 and 9 when the first artificial satellite was launched.)  If the birthday present was a "big" item - a reflector telescope - it was in our joint custody. I'm not saying we never fought. We were brothers, after all, and Irish. But it never occurred to either of us that the toys did not belong to both of us.

In 1964, I celebrated a birthday and Dennis wasn't there.

The reason again is simple. He had died. Somehow along the way he had contracted Hodgkins lymphoma; and neither chemo, radiation, nor the intercession of Bl. John N. Neumann was going to stop it. He grew puffy and weak and tired. I tried to jolly him out of it because I didn't really understand what was going on. No teenager believes in death. The only time I ever remember my mother crying in front of me was when she told me that Dennis was not going to get better.

We visited him one day, after he had moved into the hospital, and while I was standing at the bedside, the painkillers wore off and his eyes rolled back in his head and he sucked in his breath. He didn't cry or shout or anything. He never did. The doctor hustled us out of the room while they medicated him.

One day in July, we were playing street football. The kind where you "run straight out and cut behind the Chevy." My mother came to the back stoop and called my name and stopped. Come home now. And I knew. She said nothing else, but the moment I heard my name called, I knew. That's how the banshee works.

Later that year, I had a birthday, and Dennis wasn't there.

Today, and for three days, he would have been the same age as me.  Then I will pull ahead of him once more.  But the joke just isn't the same.
Posted by TheOFloinn at 6:23 PM