You Don't Have to Be Hollywood

to gives things the Hollywood treatment.  There is a movie out about the burning of the "second library of Alexandria" and the murder of Hypatia that plays all the long-debunked myths of Gibbons.  There is a review of it here at Armarium Magnum 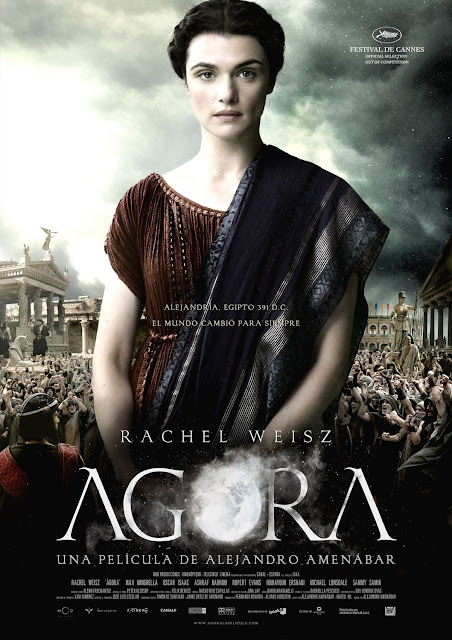 Hey, she looks pretty hot for a philosopher who was in her fifties at the time she was murdered.  (And yes, we know.  She is wearing First Century garb in the Fifth Century.  So do the Roman soldiers, who wear the lorica segmentata.)

The director recognizes that the Great Library that was attached to the Museum no longer existed in the fifth century.  The last clear reference to it is from AD 135.  Strabo does not mention it at all in his Geography, even though he gives an otherwise detailed survey of the Museum and the Palace precincts.  For that matter, there is no evidence that a library was housed in the Serapeum at the time that the emperor ordered the temple demolished.  (The demolition was carried out by Imperial troops as well as by the city mob.)  All of the scenes that push the director's agenda seem to have been invented from whole cloth or to have been altered from the primary sources.  There is no record that Hypatia was killed for her learning or for being an uppity woman.  (In fact, one scholar I know states that a female teacher speaking in public was more likely to be a Christian than a pagan.  Hypatia is not referred to as a pagan in the primary sources, only as a teacher of Neoplatonism.  But Neoplatonism was viewed quite favorably by Christians.  Had not Plotinus himself deduced that God was necessarily Triune?  Was not Augustine of Hippo himself learned in the philosophy?)

The director has confused modern fundamentalism with the fifth century.

Oh, and he also tries to convince the audience that Hypatia was on the verge of heliocentrism, just so the audience is subliminally conditioned to imagine how "science" was stopped dead in its tracks by the mob.

For those that are interested, the full story of the political intrigues that led to her murder is contained in the Ecclesiastical History by Socrates Scholasticus.  (There is further material in a parallel book by Sozomen, but the latter's History ended with his death prior to reaching the time of the murder.)

The Alexandrian public is more delighted with tumult than any other people: and if at any time it should find a pretext, breaks forth into the most intolerable excesses; for it never ceases from its turbulence without bloodshed.
Posted by TheOFloinn at 3:41 PM