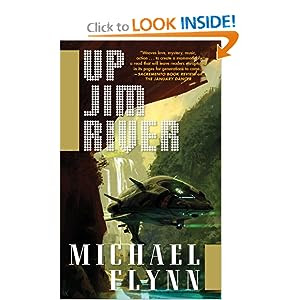 The reader of Up Jim River may recollect a wildman, Teddy Nagarajan by name, who figured in the storyline.  This eager reader may be longing for a story about the aforesaid wildman.  Well, shortly he may long no longer, or perhaps a short while longer, inasmuch as yr. obt. svt. has just finished a short story featuring an adventure of his on his home world, known in humble simplicity as "World."  Whether this story will find favor in the eyes of editors, or indeed in the eyes of the author after he pauses to regain sanity and rereads the draft, is another matter entirely.

The story is entitled "The Journeyman: On the Shortgrass Prairie" and is, to fuel your sense of dread, the first in what I hope may become a series of stories.  "In the Houses of Stone," "On the Ocean Shore," "In the Contending States," "In the Ice Mountains," and "In the City of Fire and Steel."  Whether I can in fact deliver on this plan, who knows?

An excerpt from "The Journeyman: On the Shortgrass Prairie"


The road is better than the inn.  – Cervantes
#
A Snake in the Grass
Teodorq sunna Nagarajan the Ironhand slept on the open prairie in a spot no wise man would have chosen for a camp, and in which therefore no cunning man would think to find him.  And cunning indeed were the men who followed the spoor of the son of Nagarajan.  It was a cold camp.  He had built no fire.  Fire warms and counsels and keeps at bay certain creatures; but others it beckons, and those others Teodorq was disinclined to signal.
On all the Great Grass, he feared no man; but fearing a score of men was another matter.  One Serpentine, he could meet knife-to-knife.  Half the clan, maybe.  But not all the Serps all at once.  It would be a songbound feat even to evade them.  He had scattered caltrops made of thornbush to warn of unwelcome guests, as cautious fugitives might do; but he had spread them half a league to the south, so that any who stepped on them would think he had gone toward Mud River, seeking sanctuary with the boman of Luviness, who was a distant cousin by marriage to his father.  The best false trail is the trail a prudent man would choose.
Though if Teodorq had been a prudent man, he would not now be on the lam.  It was said that all prairie men stood on one level plain; but as it was said, so was it seldom done; and chiefs and their kin oft demanded a higher blood-price than the Lore prescribed.  The old men at the Meet had muttered in their beards that this was not how feud was managed, but the old men were not out here on the fireless prairie with him, and in the practical way their disapproval meant as little to Teodorq as it did to the men who tracked him.

Posted by TheOFloinn at 8:36 PM