Is This an Answer?

Recently, I had occasion to read two items in close mental proximity.  One was by a blogger who calls himself in a touching fit of Objectivist modesty Blazing Truth, which I stumbled across in the usual fashion while googling for something regarding Aristotle's potency/act distinction that I thought I might use in a PowerPoint presentation.  The other was an essay by the inimitable James Chastek continuing a discussion on the nature of the sensibles.

If it's not one thing, it's another.  First, the one thing.

Our intrepid Blazing Truth, whom I will call "Blaze" as a nickpseudonym, evidently believes that the God of classical theism is a scientific hypothesis put forward to explain natural phenomena, and that therefore Thomas Aquinas' "First Way" (a.k.a. the "argument from motion") is an attempt at physics and is therefore false because he did not know Galileo, Newton, and Einstein.  Unlike many others, he is honest enough to admit that he has in earlier posts misunderstood the nature of the argument and the meanings of the terms as they were used in the argument.  He does not change his mind, obviously.  He simply reiterates his objections from physics.

Now one of the objections is to the proposition that "whatever is changing is being changed by another."  He does not realize that Aristotle and Thomas were aware that a dog, for example, could be changed in location, by its own decision, and what was meant here was that in compound bodies, the motion of the whole (dog) was due to the motion of a part (legs).  Thus, when Blaze says

But of course, it was Aristotle who claimed that powers arose from within the being.  It was the Cartesian revolution that postulated "dead" matter that was simply particles in motion, moved from without.  The weak nuclear force is, philosophically, a "part" of the atom and is surely able to actualize the potential of another part.  At least Blaze grasps that Aristotle's κινεσις meant actualizing a potential, even if he is not entirely clear on what potentials and actualization are.

You will notice that physicist William Wallace included the Weak Force as one of the powers of inorganic being in his model, above.  (The others are strong force, gravitational force, and electromagnetic force.)  Together, they constitute the substantial form of inorganic being, such as an atom.  If any one of them were removed, the matter would cease to be matter as we understand it.  Blaze recognizes this, but seems to think it is an objection to Aristotelianism rather than a feature of it.

But the piece de resistance is that trusty old internet stand-by, quantum mechanics.  (It has been suggested that in any internet discussion, the first person to evoke the quanta should automatically lose.)  Blaze writes:


It is because of virtual particles that spontaneous phenomena exist. Examples of these include but are not limited to: the Casimir force, spontaneous photon emission during decay, Hawking Radiation, etc. Again, it is wrong to say that these particles are dependent upon anything.

He evidently thinks that spontaneous changes are not caused by anything.   They are magic.  On another, linked site, he counters the proposition "whatever is changing is being changed by another" by saying some things are changing without being changed at all.  This is a neat trick, actually.  (Pun intended.)


Some might say that the spontaneous virtual particle pairs are empirical evidences of God creating.  Bingo, there they are, coming out of "nothing."  (They aren't really; but then the not-nothing becomes the changer....)  The respondeo is "IT JUST IS!"  Curiously enough, this was the answer God is said to have given Moses when Mo asked him his name: I JUST AM!  For those easily amused, such as me, this is easily amusing.

On a linked site, Blaze says:


According to the most commonly accepted interpretation of quantum mechanics, individual subatomic particles can behave in unpredictable ways and there are numerous random, uncaused events. (Morris, 1997, 19)

Now, the obvious response is that the most commonly accepted interpretation of quantum mechanics must therefore be wrong.  A physicist friend once commented that if a theory results in singularities and paradoxes, there is something wrong with the theory, not with the world.  There are, after all, several other interpretations of quantum mechanics, all of them compatible with the observed data and the mathematical laws, and not all of them produce the paradoxes.  Mathematical models typically break down precisely at boundary values.

Blaze has also, unwittingly, drawn a line inside the material universe and said, "Thus far can physics lead, but no farther!"  After that, it's faith and turtles all the way down, I suppose.

Nothing is in the mind that is not first in the senses.  Thomas was an empiricist.  He always started with actual experience.  In that he differed from modern materialists, who often start with some abstract Truth, like "materialism," which they then apply willy nilly while keeping their eyes firmly closed when passing the bristling strongholds of mathematics.

The problem of the sensibles.  Things enter our mind through our senses.  The external senses are things like sight, hearing, etc.  The inner senses are things like the common sense (which integrates all the sense impressions into a single, not necessarily visual image), memory (which stores the image) and imagination (which manipulates the image).  (The intellect then reflects on these perceptions and abstracts concepts from them, and so on.)

Chastek's series of essays on the sensibles looked at the distinction between proper and common sensibles.

Proper sensibles: are those that can be sensed by only one sense; such as color, sound, smell and taste.  They cannot be confirmed by other senses, esp. by touch.  We can't listen to red.  If we try to touch red at second hand, such as by measuring the frequencies of reflected light, we are confirming red based on the given experience of seeing red.  Proper sensibles are, however, the first things we know of an object in our senses.
Common sensibles are those that can be sensed by more than one sense; such as shape, number, motion, etc. They are more reliable because they can be confirmed, and perhaps more certain as well.
During the Revolution, Galileo and then Descartes took this distinction and ran with it.

The revolutionaries then declared that only the objective (metrical, controllable) qualities of an object were mete for science.  Devotees began to claim that proper sensibles (subjective qualities) did not even exist in the world.   If a tree fell in the forest and no one was there to hear it, it did not make a sound.  It made waves in the air.  These are objective.  It did not make a sound.
—Aristotle said that we cannot err about the proper sensibles.  But, said Chastek, color is not perfectly objective.  A bee sees two colors on sunflower petals; humans, only one.  Deer see bright orange vests as same color as trees.  So who sees the "right" color of a hunter's vest: deer or man?
So Thomas wrote that we cannot err about the sensible insofar as it is sensed.  Meaning that if you see a blue sheet of paper on the table, then you have seen "blue," and that's it.  This is true even if the sheet was "really" white and the room was lit by black light.  The blue is in your consciousness.  End of story.
So in Aristo-Thomism, the sense object is a compound of
IOW, the observer affects the thing observed.  The proper sensibles really do exist in the world AND they are combined with observer’s subjective disposition.  Why don't we call this "the observer effect."
Funny.  That has a familiar ring to it.
They meet!
So Aristotelianism already denied perfect objectivity to sensation.
Heisenberg, classically educated, knew this.  His was the last generation of scientists to receive a rounded education.


3. So what was that Quantum Stuff all about?
Common sensibles (e.g. quantity) can be absolutely separated from their foundation in the proper sensibles.  Physics has assumed that the quality of the common sensibles is identical to the quantity of a mathematical account.  This might just be the source of the quantum paradoxes.  We think we can have a true “wave” or “particle” – or any quantity at all – in an area where the proper sensibles cannot exist. 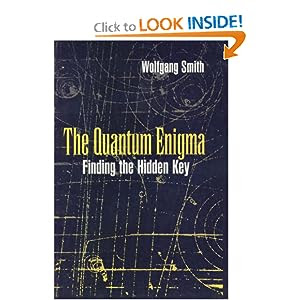 Decartes' res extensa stripped world of sensibles (or qualia).  His res cogitans claimed that the sensibles are projected into the universe by the observer.  Thus was born the "problem of the qualia," as it is now called.  This bifurcation is by now so ingrained that moderns must struggle even to recognize, let alone eradicate it.  But eradicate it, we must if we are to resolve the quantum paradoxes.  We must "Rediscover the corporeal world!"
The apple really is red!
Physicist Wolfgang Smith has written about this in his book, The Quantum Enigma.  He claims that by properly understanding the distinction between the "corporeal apple" and the "physical apple" -- that is between the apple of the senses and the apple of physics -- and understand how these two planes of existence map to each other, we can resolve the quantum paradoxes.  Aquinas to the rescue, once again.
But about this I can say no more until I secure, read and digest a copy of Smith's book.  Then I can regurgitate it all over your screen.
Now, to the point.  (Yes, I had one; though I almost forgot it.)  Back to Chastek.  Consider that we can only touch things with photons and electromagnetic particles.  These are very small things.  When a photon bounces off the apple to the apple of our eye (and then becomes the apple of our perception) the apple is affected by the impact of the photon.  Big deal, says the apple.  I am big and it is small.  A flea.  It is no more than a bug on the windshield of my life.  And indeed, our anthropomorphic apple is correct.  The apple is changed so minutely by shining a light on it, that we would need godlike powers to detect it.  (But we do know that we can move things with the impact of light.  You know that, right?)
But what is true for apples is not true for subatomic particles.  In that realm, the particle that we sense by are large compared to what we are trying to sense.  The impacts of the sensory light or particle beams are plenty powerful; less a bug on the windshield than a deer.  Chastek compares hitting a bug to hitting a tree.  Relative size matters.  No wonder that "the quanta are a hopeless mess" (as the Bohr-Einstein letters complain).
For a macro appreciation of what sensing the quantum world would be like, suppose we did not "see" by photons bouncing off the object and into our eyes, but by rubber balls bouncing off and impacting on our skin.  In that case, a chicken may look very different from an egg.  And we might wonder at the quantum enigma of chickens hatching from broken eggs; for almost every egg we "see" would be broken, and we would suppose this to be their natural state.  But all we have done is turn a tennis ball launcher on the egg in order to "illuminate" it.
Posted by TheOFloinn at 7:28 PM