Some of you may have seen the recent silent movie The Artist about a silent movie actor who resists the move to the talkies.  It's a very good movie,and if you have not seen it, you should.  One of the interesting aspects (aside from ironic dialogue bills in which, e.g., the wife tells the actor, "We need to talk" or the actor declares "I will be heard!") is how very different the acting protocols were for silent films.  They were, in essence, recorded pantomimes, and whatever the actor had to convey was conveyed through posture and facial expression.  Usually, these were exaggerated compared to what we are used to and seem now to be hamming and mugging.  (Something similar, though opposite, can be said regarding radio acting protocols, in which everything had to be conveyed by voice or sound effects.) 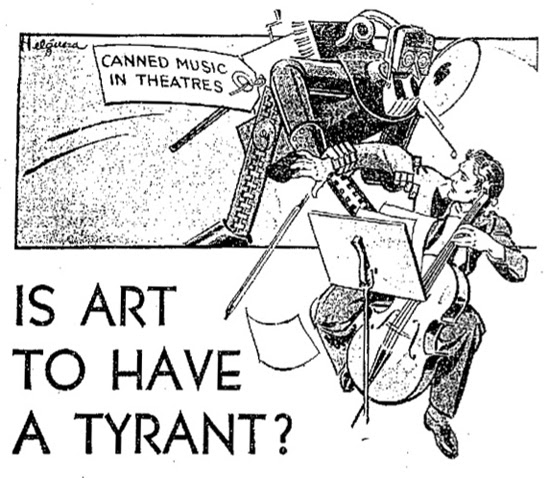 But there was another group affected by the transition to the talkies: the live musicians who played in the movie theaters.  While they realized they could not resist the recorded dialog and sound effects, they objected strenuously to "robot music."  Real music, you see, needed soul and emotion, which canned music could not provide.

There is something at once charmingly naive and feckless about the musicians' union campaign against canned music in theaters. Like locomotive firemen fighting to stay on the job in the diesel engines, the motive is clearly to keep their jobs; but the insistence that the movie-going public needed (and wanted) culture in the form of live music may have been just as sincere.  Consider the text in the following ad to enroll people in the "Music Defense League" in which the stereotyped Moneybags is foisting robot music to drive out the orchestra. 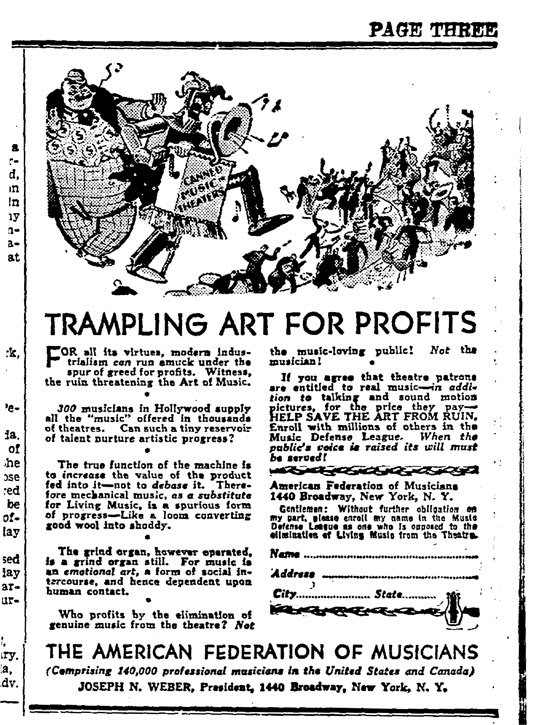 There is something eerily modern to the whole effort: the resistance of conservative sentiment to the juggernaut of advancing technology.  But however inevitable the tide of history may be, whenever there is something gained there is also something lost.  Entire professions, arts, and ways of life are discarded on "the ash-heap of history," and we ought not pretend that there was never anything to them.  Except for novelties like The Artist, no one is going to be making silent movies any more, and certainly not with live musicians in the theater.  Radio drama is pretty much gone for good, too.  No is the novel.


“The indulgent, 800-page books that were written a hundred years ago are just not going to be written anymore and people need to get used to that.  If you think you’re going to write something like The Brothers Karamazov or Moby-Dick, go ahead.  Nobody will read it.  I don’t care how good it is, or how smart the readers are.  Their intentions, their brains are different.  The bite/byte-sized culture in which we operate today makes our attention spans struggle to hold beyond 140 characters, much less 140 pages."