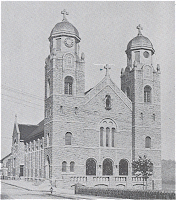 After a century of existence, TOF's parish church is in need of extensive structural repairs, more than its congregation of mostly poor and fixed incomers can plausibly raise.  So if anyone out there knows Bill Gates or something, now's the time to give him a call.


Our Lady of Mercy

Neepery about the building is below the cut.  It would be a shame to lose it.


It's the third building to have been built on the site.  The first was in 1856, and the cornerstone was laid by St. John Nep. Neumann, then-bishop of Philadelphia.  The second, larger building burned in a great fire in my grandparents' youth.  The third was laid in 1915.

Similar in plan to the Frauenkirche in Munich, Germany, the church is constructed of Stockton granite from basement to roof.  It is 140.5 feet long by 75 feet wide.  Its twin towers, about 100 feet tall, are capped with terra cotta domes.


The stained glass windows were made in Germany, we think by the Franz Mayer Studios, but their delivery and installation were delayed until after WW1 was over.  The windows lining the nave depict the life of St. Joseph, patron of the original parish.  The two windows in the choir loft in the rear depict David the Psalmist and St. Gregory (as in Gregorian Chant).  The four windows in the sanctuary depict Eucharistic scenes: Moses and the manna, Melchizedek, Abraham and Isaac, and Elijah receiving bread and water from Heaven.

The bell tower contains a three-bell peal in C-G-E.  The bells are named (from low note to high): Saint Joseph, Protector, Our Lady of the Angels, and Saint Agatha.   The no longer swing -- too many tons rocking the tower -- but are struck with external hammer.

The designers of the church took pains to make its layout liturgically apt.  Below is a long view from the choir loft, a bit washed out in light.

Here is a closer view of the sanctuary:
The vertical line leads from the dome (blank, representing the Father) through the canopy (on which a dove represents the Spirit) to the crucifix (and the Son).  This leads directly to a bas-relief of the Last Supper flanked by mosaics of grapes and wheat.  The celebrant's chair is in the same vertical line, in loco Christi, leading the eye to the altar.  The chairs for celebrants and servers echo the disciples seated in the bas-relief.  That visual space was once occupied (appropriately) by the tabernacle, but when the altars were turned around, liturgical meaning was not wasted.


The horizontal line along the top of the altar screen are icons representing the sacraments, with the Eucharist in the center.  Below them, circular mosaics depict Eve and Mary. The vertical and horizontal line together represent an upside down cross.


There are other details: the nave is roofed by a barrel vault whose faux ribs are supported by corbels in the form of cherubs:
The Stations are in high-relief plaster between the windows: