The September issue of ANALOG contains my Novelette, "Elmira, 1895"


He came with the night mail on the West Shore Line at just that moment when the world teetered between one day and the next.  Midnight is a magic time, the single instant when there is no present; only a receding past and an unrealized future.  He stood alone on the platform with his greatcoat and valise and watched the red lanterns of the caboose vanish into the night.
The breezes whipped up by the train’s passing died, and with them the fading clackety-clack of wheels on rails.  The flurry of activity that had greeted the mail’s arrival – station-master, post-master, Negro porters, conductor – had evaporated like ghosts.  The stars looked down on the empty platform through a cloudless sky, unreachable and yet at the same time unbearably close.  On nights like this, the stars alone could cast shadows; and would have done so had the gas lamps lining the platform not overwhelmed them.  Their guttering flames peopled the station with silent, capering shadows.
A gentle rain of soot and cinders fell in the locomotive’s wake and the man brushed absently at his sleeves and shoulders.  It was a warm night and damp with the recent rains.  A wretched hour to arrive anywhere; but Elmira was as remote as Khatmandhu so far as railroads were concerned and midnight it was, “unless the gentleman would care to wait until tomorrow.”
The gentleman would not, and so the night mail it had been.  He looked around to get his bearings and, hefting his valise in one hand and draping his greatcoat over the other arm, he strode briskly to the stairs at the end of the platform.  The worried glance he spared just before stepping off was aimed not at the lights of the departed train, but at the glimmering stars overhead – as if he expected that at any moment one would drop and strike him upon the head.
#
The frowsy hotel was just as he remembered it, though five years had gone since he had last stayed there.  The night clerk was a shrunken and wrinkled old man, aged in a pickle vat.  He looked up when the bell rang, but gave no sign of recognition, and made no comment while the stranger signed the register.  He did, however, drop the double-eagle on the countertop to hear its ring before placing it in the strongbox.  “You must receive a fine class of boarder these days,” the stranger commented dryly.  But the clerk simply shrugged – a comment as eloquent as a thousand words from lesser lips.  He handed over a heavy brass key with the number 28 stamped into it in uneven numerals.  The stranger hefted his valise.  “I was told Mr. Clemens was in town,” he said.
“Couldn’t say,” the clerk answered.  Then, as if words cost four bits apiece, “Hear tell, he’s down Ha’tford way.”
The stranger shook his head.  “I’ve just come by way of Hartford.  They told me that he had come here.” 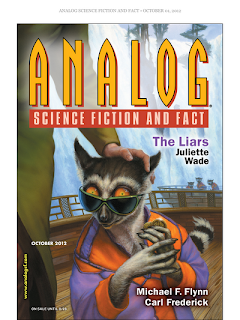 The clerk chuckled.  “That man Clemens is full of comin’s and goin’s, Mr....”  His eyes dropped to the register, reading it upside down.  “Mr. Kipling.  Don’t clear his travels with me, anyways.”


And for those demanding a double-dose of Flynn -- and there may be one or two of you out there -- the new October issue of ANALOG contains another novelette, "The Journeyman: On the Shortgrass Prairie," already previewed here.

Still in the pipeline, but likely to be in the Jan/Feb double issue, is the special feature: "The Great Ptolemaic Smackdown and Down-and-Dirty Mud Wrassle," previewed here. 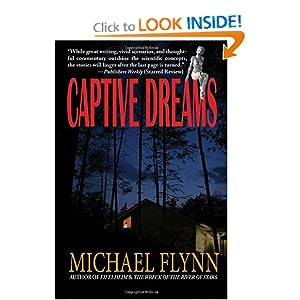 Posted by TheOFloinn at 4:32 PM