Yes, it's that time again: Clearing the Tabs!  Wherein TOF posts a number of links which he saved as of possible interest for his Reader and wishes to get up there before his collander-like mind forgets why he thought them interesting.


1. Notes from the Untergang

TOF's long time Reader, whatever his name, may recall previous notes regarding marriage, such as:
TOF also recalls that there have been efforts to have same-sex partnerships recognized as marriages (although he is reminded of Abraham Lincoln's quip about dogs and legs) because it is double-plus unfair for some couples to receive Government Goodies (whatever those are) while others do not.  This has led to the ultimate It's Not Fair! foot-stamp in the Atlantic:

Single People Should Get to Have Weddings, Too
What is the sadder thing about this story:
TOF weeps from pity in either case.  The author and those she writes of do not seem even know what a wedding (or a marriage) is!


2. Emptying Out by Walking Through

Back in the Sixties -- and TOF was there and had a fine time, thank you very much -- radicals advocated two strategies along the lines of a discussion between the TOF-that-was and a friend from the neighborhood by then condemned to an Ivy League re-education.  Said friend had joined the SDS, which some survivors of the Revolution may recall.  He advocated Direct Action, confronting the Man, the General Strike, and all that jazz.  (Alas, the general strike proved unworkable, since most workers, including union workers, were uninterested.  It's hard to be the Vanguard of the Proletariat of the proletariat is going the other direction.  Hence, Marcuse and his redefinition of the class struggle, making (privileged) college students point men in place of the workers and peasants.)

But there was another strategy.  It was called Emptying Out.  And the tactic was called Walking Through.  What this meant was that one would observe all the forms of bourgeois society but completely disregard the matter, thus making the institutions insubstantial.  Thus, one would go through all the forms of marriage, for example, but pay no attention to the substance of it.  And so on for other icky middle class thingies.

On the government side, this took the form of a kind of ju-jitsu by which the Establishment and the Man would not be opposed, but pushed.  If government were made more and more expensive it would eventually overload and collapse and the Wonderful World of Post-State Society would commence.  [Remember: back then, the State was the enemy of the progressives!]  So programs to benefit the very poor would be extended to cover the working poor, then the middle class, and so on. School lunches come to mind.  Eventually, in the name of Fairness, the program would become unweildy and unfair and would collapse, opening a demand for the Vanguard of the Proletariat -- by that point, academics and students rather than unions and, you know, like actual proletarians -- to step in and make things right.

TOF doesn't know why, but he has been thinking about these things more recently.

Socialism is an excellent philosophy for those genuinely oppressed.  It becomes a problem when governments adopt it.


4. More Notes from the Untergang

A headline from the Puffington Host informs us that in the on-going struggle to ensure that no one ever enjoys a benefit not enjoyed by everyone else [see single weddings, above]
Prudhomme's Lost Cajun Kitchen Must Offer Atheists Its Church-Goer Discount, State Rules
How a small restaurant in Lancaster County PA can establish a religion, TOF does not know.  Anyone remember "Ladies' Nights"?  So far, the restaurant is hanging in there.  She [the owner] says if anyone brings in a bulletin from a mosque or synagogue, they get the discount, too.  That may not be a big issue in Lancaster County.  More likely the Amish, who don't have churches per se, will be out in the cold; but they usually eat at home.

Meanwhile, in North Carolina, a first grader wrote a poem for Veteran's Day, but was not allowed to read it.  Why you ask?  Why, because second graders can be an establishment of religion!  The poem, which was about her grandfather's service in Vietnam, contained the line:

"He prayed to God for peace, he prayed to God for strength."
It did not matter whether her grandfather had actually done so.  It mattered only that she had used the Phorbidden Phrase.  An *ssh*le parent complained and the line was stricken; thus teaching the child something about totalitarian techniques, the first amendment right to free speech, and the bullying methods of atheists.  She should have written that her grandfather burned a flag and went to Canada.  They would have stroked her for her courageous statement.  Hate to be so direct, but Jeez, some people need to get a life.

And to complete the godless trifecta, we have a case across the river here where a teacher who habitually used the phrase "the first shall be last" was pestered by a student to find out where the phrase came from.  (This is a high school student.  He didn't already know!  So low has cultural education fallen.)  So the teacher told him and outside of school hours gave him a Bible where he could look it up.  And with that all of Western Civilization came tumbling down.  The usual suspect complained and the teacher was threatened with firing.  The words used made it sound like he had said something vulgar or had given the kid pornography.  If he had, he might have been celebrated as transgressive.  Who knows.  But the thing is this: How can anyone be an educated member of Western Civilization without any knowledge of it foundational documents?  Even to know the origins of common words and phrases?  You don't have to be Jewish to understand what means the phrase "as old as Methuselah."  You don't have to be Christian to recognize the meaning of "turn the other cheek."  Heck, you don't even have to turn the other cheek: you could offer a beat-down instead and kick the sucker in the mouth when he's down.  But you ought to know the origin and meaning of common expressions; and in English, that means the Bible and Shakespeare.  Tough noogies.
(Modern student don't like to read Shakespeare, either.  This will be handled by the new Obama "Common Core" standards to be imposed on all schools despite the Dept Ed. enabling legislation forbidding DoE from doing any such thing.)


5. Soon it will be Illegal to Disapprove


6. The Strange Ability of Global Warming 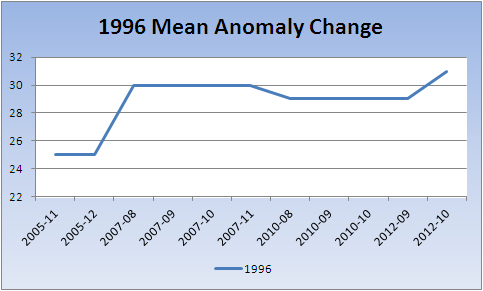 Meanwhile, the 1880s have been getting colder. 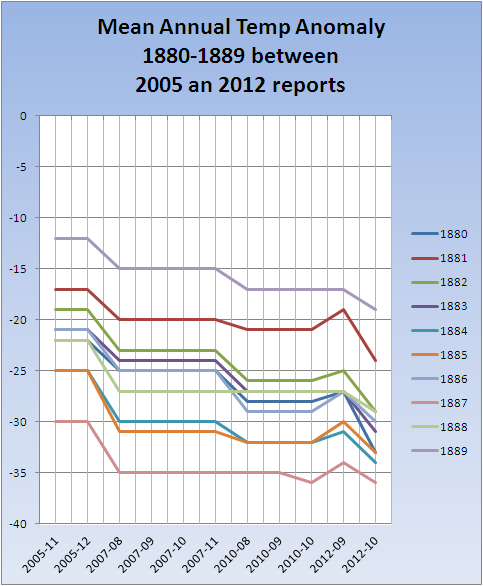 The combined effect is to make the amount of warming between then and now even greater.  Global Warming is accelerating!  Even retrospectively!  We're all gonna die!

St. Nicholas once punched out Arius at the Council of Nicea.
He is depicted here bitch-slapping Arius here:
and here, in front of Constantine and everyone, just before.
Now as a result he was stripped of his bishopric by the council and thrown in prison by Constantine for acting in an unChristian manner; but Arius was way outvoted and "consubstantial with the Father" went in the Creed until the Spirit of Vatican II decided to alter it with lead-foot wording.  But perhaps the eventually-reinstated Nicholas slapped them a time or two.  I don't know; but 'consubstantial' is back now.
Posted by TheOFloinn at 12:52 AM